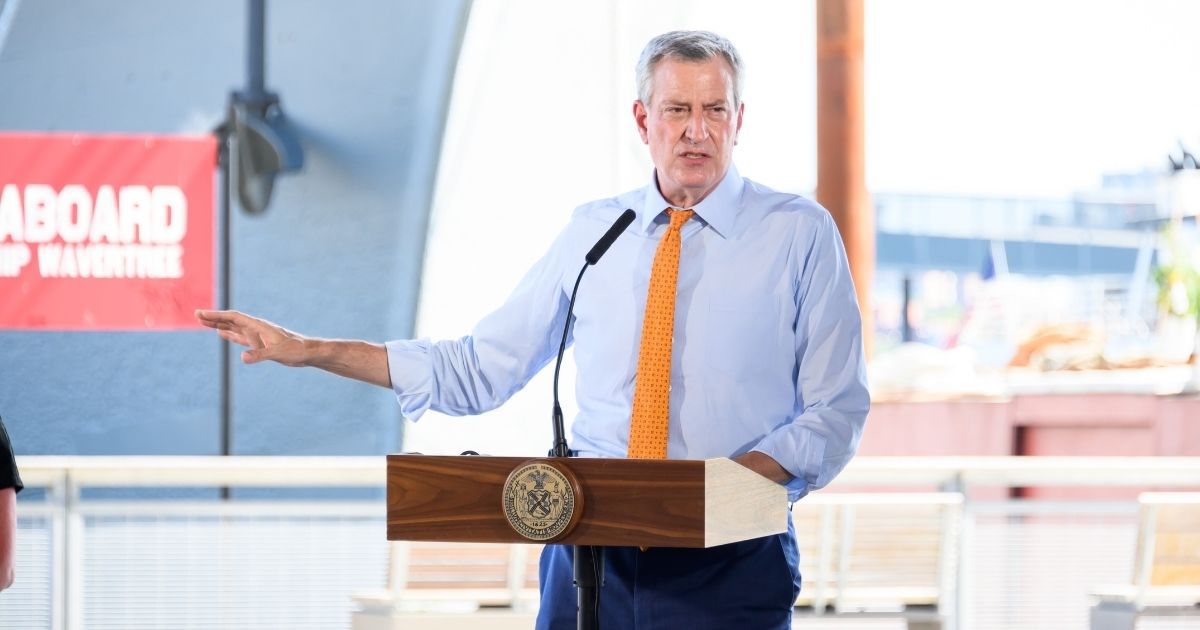 No matter what anyone thinks of President Donald Trump, what’s happening to him now should fill all patriotic Americans with dread and disgust.

Adding to the growing list of vindictive actions against the outgoing president — a real estate mogul who set aside his lucrative business to serve his country — is another potential blow to Trump’s financial future.

Citing a stipulation in the contracts that allow severance for “criminal activity,” de Blasio said the city was within its legal rights to do so.

“The contracts make very clear that if the company and the leadership of that company is engaged in illegal activity, we have a right to sever the contract,” de Blasio said on MSNBC’s “Morning Joe” Wednesday.

“Inciting an insurrection against the U.S. government clearly constitutes criminal activity,” he continued, blaming the president for last week’s incursion at the Capitol carried out by Trump supporters that left five dead, including a police officer.

“So the City of New York will no longer have anything to do with the Trump Organization,” he announced. “They have profited from these contracts, they will profit no longer.”

De Blasio went on to insist that Trump “directed a mob to attack the U.S. Congress” and accused him of “aiding and abetting an insurrection” despite the fact that Trump denounced the violence and urged protestors to “go home.”

Meanwhile, de Blasio and the city were renaming streets after the Black Lives Matter movement, which was the source of violent and destructive protests throughout the city and the nation all summer long.

His own daughter was among the 300 miscreants arrested for burning police cars, abusing law enforcement and blocking traffic in one such protest.

Still, de Blasio claimed the city was “on strong legal ground” in the move while Trump’s team promised to fight the measure.

“[W]e’re going to get new vendors to take over, and what’s obvious is these are sites that we want to continue serving the public but not with an organization led by a criminal,” de Blasio said. “Of course, we know the history of the Trump Organization. They’ll likely challenge us in court but we’re on strong legal ground. We’re very clear about that.”

“Yet another example of Mayor de Blasio’s incompetence and blatant disregard for the facts,” Eric Trump, the president’s son and executive vice president for his company, said in a statement to ABC.

“The City of New York has no legal right to end our contracts and if they elect to proceed, they will owe The Trump Organization over $30 million dollars,” he added. “This is nothing more than political discrimination and we plan to fight vigorously.”

In statement to @ABC – President Trump’s son Eric reacts to news of NYC terminating contracts with Trump Organization says the Mayor has “no legal right to end our contacts….will owe the Trump Organization over $30 million…..we plan to fight vigorously.” @EricTrump pic.twitter.com/TGHj0DbRfb

Cowards like de Blasio held off while Trump was in office and able to defend himself, but are now firing off their parting shots as Trump’s days in office are numbered.

So far, Trump has been silenced by Big Tech, abandoned by financial institutions that previously had long-term relationships with his organization, snubbed by the PGA which has pulled out of Trump’s Bedminister, New Jersey, golf course for its 2022 championship, and now the city that he literally helped build is cutting ties with him, the Washington Post reported.

Politically, Trump is facing yet another impeachment and more calls to have him thrown out of office even as the contents of the White House are likely being boxed up for shipping to his new home state of Florida.

The barrage of attacks being levied at him now is just the culmination of everything he’s had to endure over the last five years, beginning with Trump’s decision to run for president and likely continuing even after he leaves office.

Do you think the left will stop until Trump is destroyed?

Their obsession with exacting a pound of flesh and ruining Trump is nothing more than a sick vendetta, and their willingness to use a frightening and serious event like the Capitol incursion is disgraceful, shocking, and base — even by the left’s standards.

Every sane person agrees that what happened at the U.S. Capitol was terrifying and criminal, but only those with an agenda can blame Trump for any of it.

Americans on both sides of the political aisle need to wake up to the tactics of the left and their ease at exploiting a national tragedy to completely obliterate every facet of life for one of their political enemies.

Maybe this time it’s a polarizing figure like Trump, so only half of the nation objects or even cares.

But if they succeed in silencing a political adversary by cutting him off at the knees financially, politically, and personally, what’s to stop them from doing this to anyone they disagree with — including private citizens?