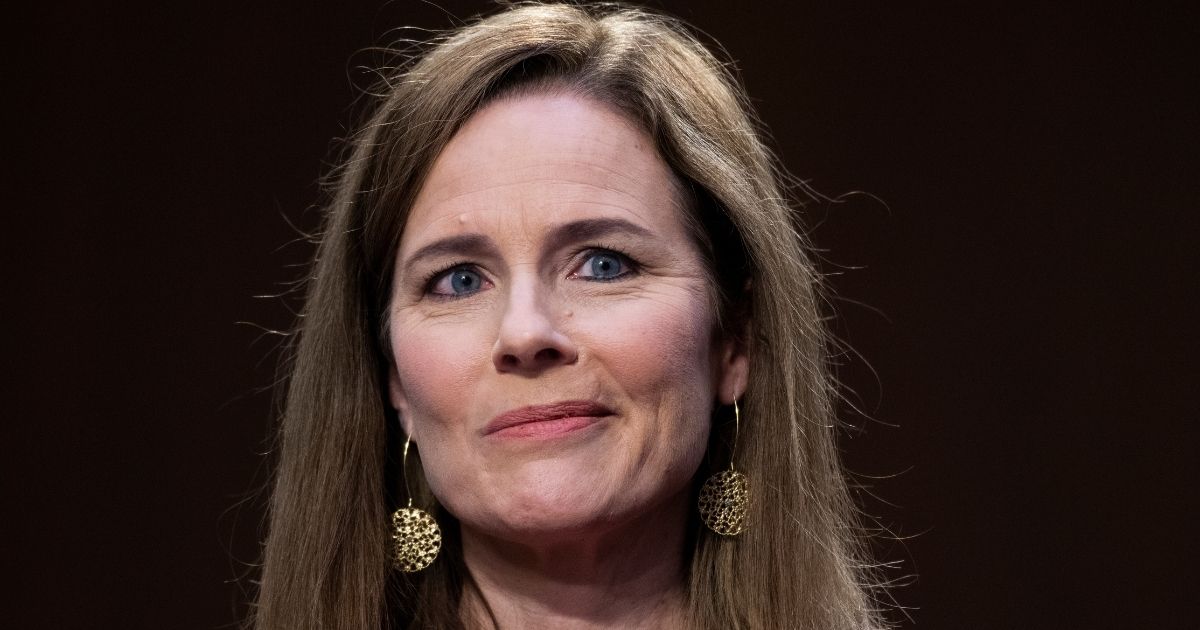 D’Souza Gill, who is a member of the Women for Trump advisory board, argues in her newly released book “The Choice: The Abortion Divide in America,” one of the most “threatening things” about the president to the left is how he is reshaping the federal judiciary, including the Supreme Court.

“If Trump is reelected, then over the next four years there is a very good chance that the Supreme Court could move to a 6–3 majority, even a 7–2 majority,” D’Souza Gill wrote.

“There is a deep anxiety that Trump’s election and reelection represent a threat to abortion ‘rights,’ and to the Court, that might prove irreversible, at least for the foreseeable future.”

Barrett’s successful placement on the high court would move it to a 6-3 majority in terms of Republican presidential appointees, though Chief Justice John Roberts has been willing to side with the liberal justices on some very high-profile cases.

D’Souza Gill told The Western Journal she believes the prospects of Roe being overturned are “pretty good.”

“We don’t actually even need Chief Justice Roberts if we do get Amy Coney Barrett confirmed because he has voted in favor of pro-choice decisions in the past,” she said.

“And if President Trump is re-elected, then he could perhaps nominate another Supreme Court justice.”

Do you support the confirmation of Amy Coney Barrett?

“It took a 7-2 majority to get us Roe v. Wade, and that may be what it takes to overturn Roe v. Wade,” D’Souza Gill said.

The issue would then go back to the states, where for liberal-run states like California and New York little would change.

D’Souza Gill discussed the topic of abortion with her father, Dinesh D’Souza, in his recently released film “Trump Card,” saying it is “the number one form of mass killing around the world.”

According to D’Souza Gill, nearly 42 million babies were aborted worldwide in 2018.

“The left likes to talk about pro-choice,” she tells her father in “Trump Card.” “They always like to focus on choice. They never say they’re pro-abortion, but we have to focus on the choice to do what? And that is the choice to kill.”

“My choice ends at the point where it reaches you,” she said. “I can’t take anyone’s life, and I don’t think that they should be taking the life of an innocent baby.”

Short of a complete reversal of Roe, the author told The Western Journal advancement in protecting the lives of the unborn may come in the form of the Supreme Court upholding so-called heartbeat bills — which make abortion illegal once a heartbeat can be detected — or bans on gender or race selection being enacted in states.

An unborn baby’s heartbeat can be heard by ultrasound as early as 5 1/2 or 6 weeks into the pregnancy (i.e., the first trimester), according to Healthline.

Roe bans any state from placing restrictions on abortions until the age of the baby’s viability outside the womb. The court noted at that time that viability was believed to be around 28 weeks.

Medical technology has advanced since 1973, allowing babies born at 22 weeks to frequently survive.

“I think Roe v. Wade was really decided at a time when they did not have the information that we have today,” D’Souza Gill said.

When Roe was decided, people were asking philosophical or theological questions like, “When does life began? Is there life in the womb?” or speculating that “maybe there’s potential life in the womb.”

“And I think now, what we’ve seen with the development of ultrasound, seeing the baby in the womb, hearing the heartbeat a few weeks in, all of those things, we just know so much more now, so it really doesn’t take any faith to see that life,” D’Souza Gill argued.

She cites in “The Choice” former President Ronald Reagan’s wry observation, “I’ve noticed that everyone who is for abortion has already been born.”

“We must remember that this isn’t simply a thought experiment since every one of us was once a fetus,” D’Souza Gill wrote.

“We all were in that position at one point. So as a former fetus, I oppose abortion. We all should.”