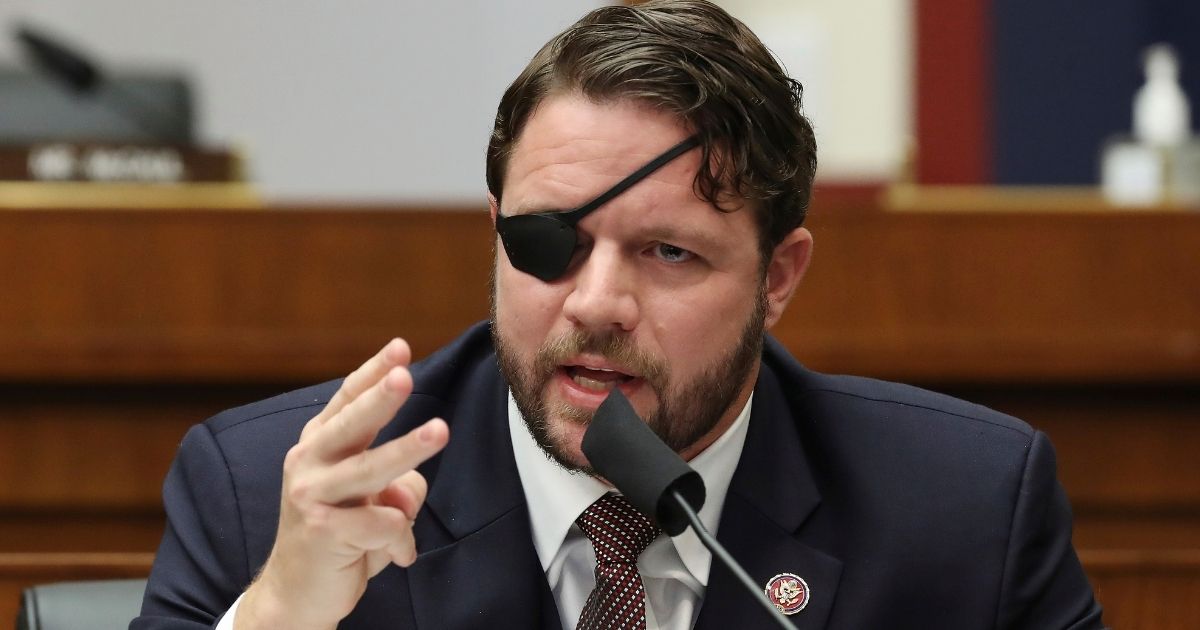 While most Americans who watched or heard about Twitter CEO Jack Dorsey getting raked by Republican senators during his testimony Wednesday saw a Big Tech titan’s blatant hypocrisy on display, Republican Rep. Dan Crenshaw saw something deeper at work.

And it was even more disturbing.

“1) Jack Dorsey is a partisan and a hypocrite.

“2) There are no liberals left in the Democrat Party. Not a single Democrat Senator defended free speech or freedom of the press today.

“This should terrify Americans.”

Biggest take away from the big tech hearings:

1) Jack Dorsey is a partisan and a hypocrite.

2) There are no liberals left in the Democrat Party. Not a single Democrat Senator defended free speech or freedom of the press today.

This should terrify Americans.

Even in his first term in Congress, Crenshaw has already established a reputation for the kind of direct, tough talk the country should expect from a former Navy SEAL.

Do you think Crenshaw is right about the modern Democratic Party?

But his observation about the Democratic Party is particularly on point.

The party that traces its roots to Thomas Jefferson and the founding of the nation has abandoned even the pretense of believing in the free exchange of ideas. Instead, Senate Democrats used their time at the hearing to assail Republicans like Sen. Ted Cruz for being just too hard on the social media billionaire.

Instead, according to the U.K. Independent, Schatz used his time in the Commerce, Science and Transportation Committee hearing to blast Cruz – and, by implication, the idea that Big Tech companies should even be held responsible for rank dishonesty during an election season.

“We never do this, and there is a very good reason we don’t call people before us and yell at them for not doing our bidding during an election,” Schatz said. “It is a misuse of taxpayer dollars. It’s happening here and it’s a scar on this committee and the U.S. Senate.”

Well, first of all, a Democrat like Schatz doesn’t have to worry about social media companies doing his party’s “bidding.”

They do that without being told.

The whole spark for the hearing in the first place was the unconscionable decision by Twitter and Facebook to try to impose a blackout on the New York Post’s stunning revelation from mid-October that a laptop apparently belonging to Hunter Biden, son of Democratic presidential nominee Joe Biden, contained a trove of evidence showing the Biden family — Joe included — engaged in a global influence-peddling operation.

Continued reporting by the Post and a handful of other outlets about the Biden family’s activities is a reminder that the idea of basic journalism is not dead — it’s simply been abandoned by the largest “news” outlets in the country, in favor of supporting Democratic efforts to oust President Donald Trump.

And in that regard, it’s been shamelessly abetted by the giants of social media. The New York Post’s Twitter account was locked on Oct. 14, the day it broke the Hunter Biden story. As of Thursday, it remained locked.

A political party that believes in a truly independent media, in free speech and the freedom of the press enshrined in the Constitution would be outraged by that kind of behavior, but it’s been clear for years that those are not the tenets of the modern Democratic Party.

Naturally, Crenshaw’s post got plenty of attackers from liberals on social media — the internet’s supply of leftist liars and fools is limitless — but he had plenty of supporters too.

Most Democratic Leaders today are Marxists masquerading as Libs.

The Party of JFK is long gone – today’s Dem Party more like the Party of Karl Marx.

It’s pretty clear the Dems are willing to sell our country out to China to selfishly enrich themselves, and part of that means stripping the freedoms away that we hold dear that defy the fascism needed to implement the grey dystopian, socialist future of their miserable dreams.

As a 51 year old US Army veteran, I grew up and entered the army during the cold war, served through many periods of unrest and war, saw our country shift and change many times, and yet I’m more scared now that I’ve ever been.

Congressional Democrats don’t even bother hiding their march towards totalitarianism. Apparently, they think the concept is becoming main stream.

Democrats have long been the party supported by the mainstream media, of course.

Republican Ronald Reagan’s presidency was plagued by hostile news coverage as he was paving his country’s path to victory in the Cold War.

Democrat Bill Clinton was shielded by the Praetorian Guard of the liberal media amid a scandal-ridden eight years.

Republican George W. Bush was blamed for everything from 9/11 to Hurricane Katrina, while his handling of the wars in Afghanistan and Iraq was under constant attack.

Democrat Barack Obama was treated as a semi-divine being, whose abuses of American taxpayers, lies about his health care reform and the Benghazi terrorist attack, and even surveillance of Washington reporters were brushed off by the mainstream media (among a host of other misdeeds that would all have gotten a nickname ending in “gate” if Obama had been a Republican).

Crenshaw was dead right, as usual, about the Democratic Party today. But his Twitter post didn’t go far enough.

It’s true the state of the Democratic Party should terrify Americans, but it should infuriate them, too.

The country deserves better, from its media and its major politicians.

Making sure Trump gets re-elected in spite of relentless, ultimately baseless attacks by the dishonest Democratic Party and its bootlicking media allies is just the first step to getting it.