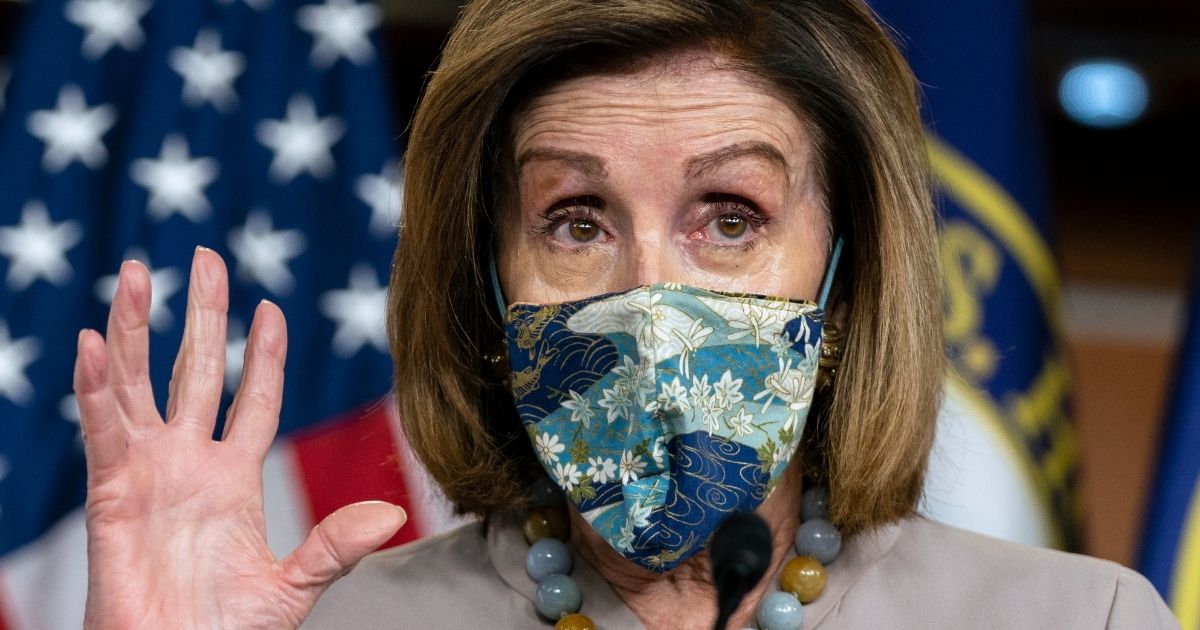 House Speaker Nancy Pelosi says some really absurd things and some really dishonest things. That is exactly what she did Monday on the floor of the House.

Lately, Pelosi has been telling anyone who will listen how much she “believes in science,” which is like saying you believe in algebra, but I digress. Democrats always insist that those who trust in God reject science (as if God is not the author of science, but whatever). Sometimes, though, they don’t just imply it. Sometimes they come right out and say it, and Pelosi did that in this floor speech.

No one says that. Ever. It’s a complete lie.

The person who “doesn’t believe in science” as a result of religious faith is an invention of the secular left. No such person exists, and certainly no such person runs around making any such declarations.

Pelosi knows she’s lying because she knows perfectly well that she has never heard anyone make such a statement — on Capitol Hill or elsewhere.

She made this up because she finds it necessary to repackage the viewpoints of her political opponents in order to make them sound as absurd as possible.

And that got me thinking. We all do this. And that’s one of the reasons we struggle to solve problems.

One of the hallmarks of an excellent policy debater is the ability to repeat back your opponents’ positions — accurately and completely — and then refute them. This makes you effective because your refutation of another person’s position is much more credible if you first demonstrate that you really understand that position.

For example, I think it’s a terrible idea to halt oil leases on public lands. It puts America in jeopardy of returning to energy dependency, and it jeopardizes access to energy resources for American individuals and industries. I am very interested in refuting anyone’s belief in this as a good idea.

But before I can refute the idea, I have to be able to represent it accurately. If I run around saying, “Joe Biden and Kamala Harris want to ban all oil drilling,” my position has no credibility, because that’s not what they’re proposing.

When we debate with each other honestly and represent each other’s positions accurately, we not only sharpen our own positions but we help those observing the debate to really understand what’s happening.

The right does this too. We claim that left-wingers “hate America” or other similar notions, instead of just making the case that their ideas are wrong.

RELATED: Marjorie Dannenfelser: The 2020 Election Shows Victory Against Abortion Is Within Our Grasp

I realize there’s a sense sometimes that our political opponents are not being honest about their real motives or intentions. For example, when Barack Obama said you’d be able to keep your health insurance if you liked it, that was a lie, and a lot of people sniffed it out at the time.

But that’s not the same thing as constantly redefining the other side’s positions to make them sound absurd and evil, all because it’s easier than offering a substantive refutation.

It’s harder to solve problems when we operate like this because people don’t understand what the real facts are. They never hear them. They only hear the hyperbole.

And when the speaker of the House is reduced to making up fiction about things people say to her, you know that this manner of debate has become so mainstreamed that it’s accepted at the highest levels of government.

If someone wants to debate me about something, I will respect him or her more if that person shows me he or she understands my position and can refute it in its real form. I will try to do the same on my end.

If everyone did that, we’d respect each other more and find common ground.

As it is today, we simply try to make each other sound as ridiculous as possible so as not to cede any ground whatsoever, and then we congratulate ourselves because we “won the fight.”

This is no way to keep a nation viable.