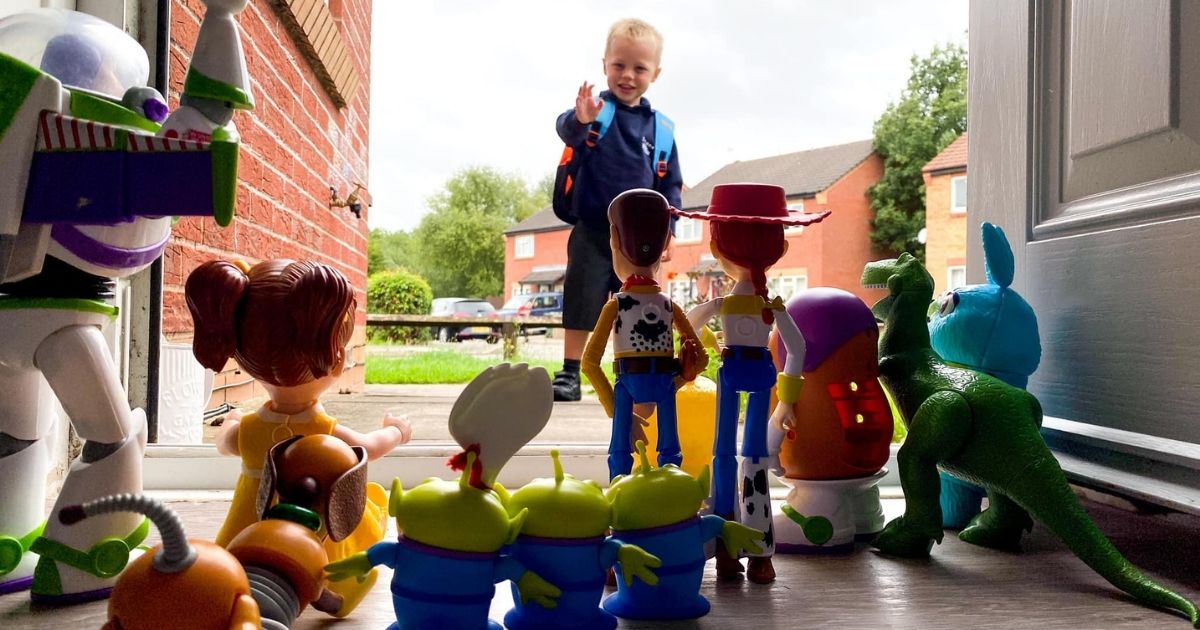 Sean Donnelly is a 32-year-old father from Loughborough, England, who — like many fathers have in the last month — recently saw his son head off to his first day of school.

A truck driver by trade, Donnelly has also proved he has a penchant for photography, setting up and snapping an adorable moment with his son, 4-year-old Vinny.

In an ode to a Pixar classic, “Toy Story” character toys are lined up along the floor, facing the open front door. Outside, Vinny waves and then turns to head off to school.

“Good luck Vinny, on your first day at BIG school!” Donnelly shared on Facebook on Aug. 26, along with two photos. “You have a bright future ahead of you mate, I’m incredibly proud to be your Dad.”

TRENDING: Historically Black University Humiliates Biden After He Claims To Have ‘Started Out’ There

The scene hails from the third installment of “Toy Story” — though in that film Andy’s heading for college and not his first day of school. Regardless, the picture is cute and struck a chord with many viewers.

“We decided to recreate the moment in Toy Story 3 where Andy leaves his toys behind when we did the traditional back to school photo,” Donnelly told the U.K. Daily Mail.

Donnelly’s partner, Charlotte, posted the images on a group where it reportedly went viral; people seemed to connect with it on a deep, personal level.

“Lots of people found it emotional and [said] that it made them cry,” Donnelly said. “I tried to make it look dark inside where the toys were and light outside where he was.”

“I wanted it to look like his future was bright, that sort of thing. It’s been quite tough for all children really this year.”

He also acknowledged that this transition to school will be tough for his son, who has spent much of lockdown by his mother’s side. His older sister, Darcy, will be able to keep him company along the way, though.

“It’s a weird situation to be in and just starting school for Vinny has been strange for him,” Donnelly explained. “He will certainly be out of his comfort zone for a while. Fortunately, he is loving it so far.”

As for the adorable photo, Donnelly has plans to incorporate it into the home decor.

RELATED: Here’s How the Pandemic Has Changed How We Eat

“It’s great to have a positive image for him to have,” he said. “His mum and I are really proud but he isn’t that fussed.”

The photo taps into a feeling that many parents have experienced. That feeling was what made the scene in the movie so powerful and it’s what makes Donnelly’s version so relatable.

“I think that story connected with the pictured is one people can identify with too,” Donnelly said. “If you have got kids you kind of know that feeling.”