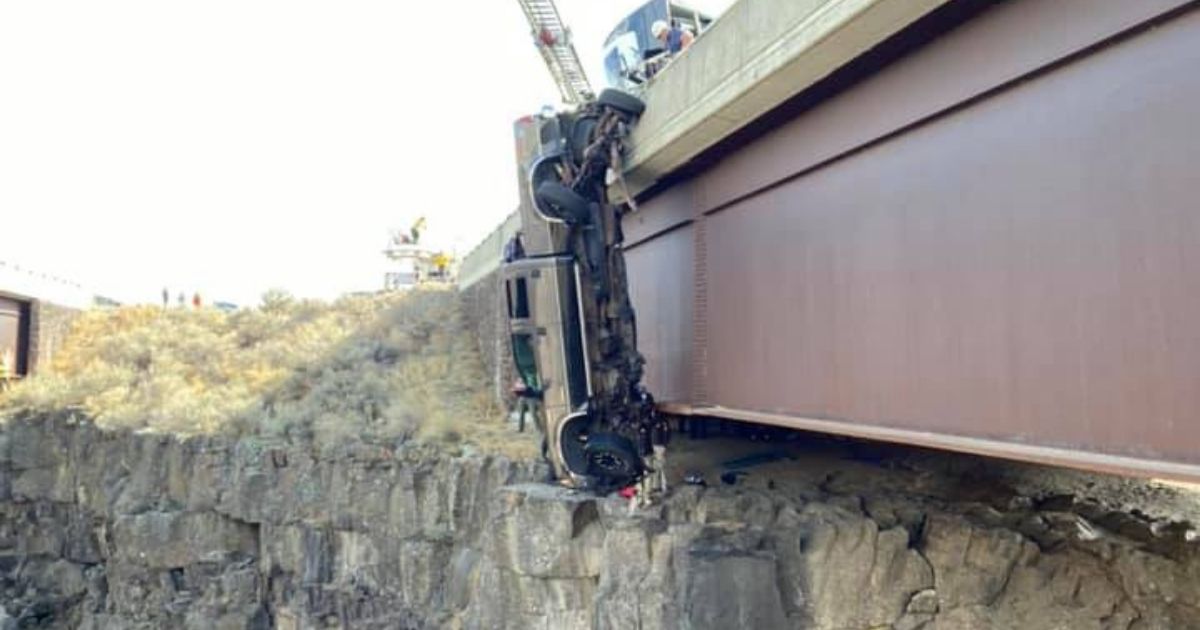 Two things likely saved the couple and their dogs: the two passengers were wearing their seatbelts, and they had made sure to attach the safety chain between the truck and camper.

The camper, which was still on the bridge, was the only thing keeping the truck suspended by that safety chain, and the gorge dropped 80-100 feet below the bridge.

Update: Emergency responders from Jerome, Gooding, Twin Falls and @IdahoITD have responded to help with the ongoing incident on eastbound I-84 at the Malad Gorge. Motorists being rerouted to Hwy 30 thru Buhl & Twin. More info will be released as it becomes available. pic.twitter.com/PeMpWuFcHm

An Idaho State Trooper passed the scene shortly after the accident occurred and was able to immediately begin assisting the victims.

He was able to call the two people in the car and confirmed they were okay and — miraculously — not seriously injured.

As backup arrived, emergency responders added more chains from a semi-truck driver to try to further secure the truck.

It was the Magic Valley Paramedics Special Operations Rescue Team that finally rappelled to the truck, harnessed the two passengers, and got them (and their two small dogs) safely onto solid ground.

The Idaho State Police posted photos of the terrifying scene.

“Update: A HEROIC effort by multiple emergency response agencies means both occupants of this pickup are safe,” they tweeted. “They’re en route to area hospitals with what appear to be non-life threatening injuries. Safety chains to a camper initially kept the truck from falling into the gorge.”

Update: A HEROIC effort by multiple emergency response agencies means both occupants of this pickup are safe. They’re en route to area hospitals with what appear to be non-life threatening injuries. Safety chains to a camper initially kept the truck from falling into the gorge. pic.twitter.com/460AWClyiT

“This was a tremendous team effort that took a quick response and really showed the dedication and training of our community of first responders,” Capt. David Neth with the Idaho State Police said, according to Big Country News.

“This is something we train and prepare for, but when it happens and people’s lives literally hang in the balance, it takes everyone working together, and then some.”

Both victims suffered minor injuries, but it’s a miracle they even lived to tell the tale. Thanks to some well-drilled paramedics and a sturdy safety chain, these two can continue their travels in the future.