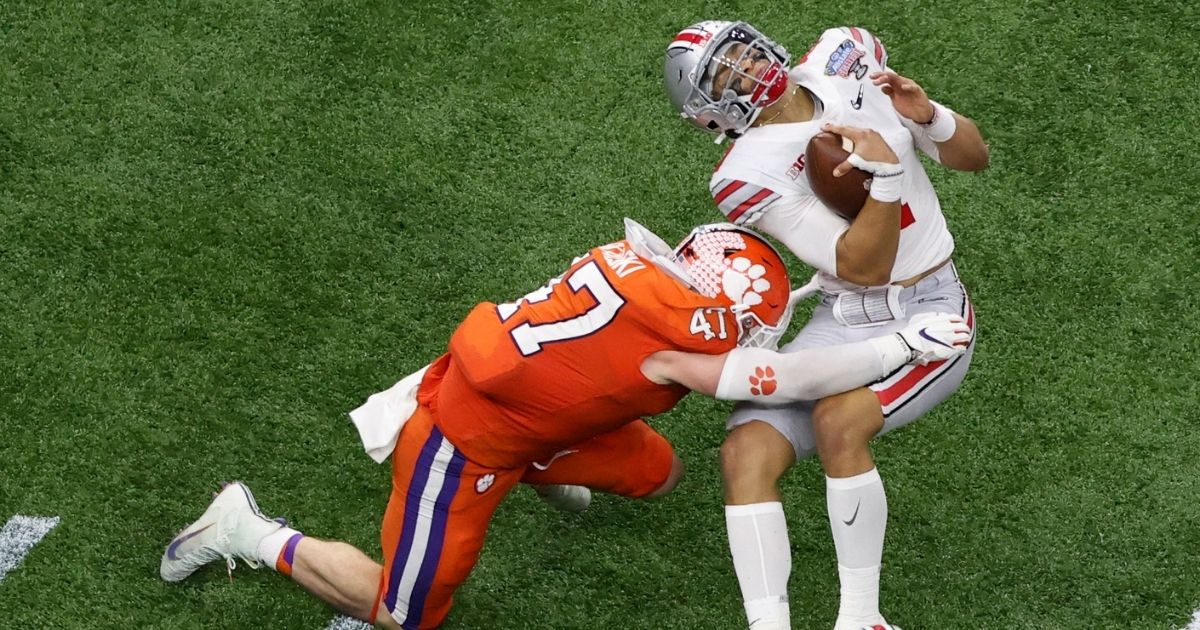 Both of the semifinal games, pitting the Alabama Crimson Tide against the Notre Dame Fighting Irish and the Clemson Tigers versus the Ohio State Buckeyes, were lopsided affairs that weren’t very competitive after the first quarter.

What should have ostensibly been a matchup of the four best teams in college football looked more like two varsity squads respectively playing against a pair of JV teams.

Alabama cruised to a 31-14 win over Notre Dame, continuing the Fighting Irish’s recent history of lackluster bowl performances. Crimson Tide receiver DeVonta Smith looked every bit like the Heisman finalist he is by catching seven passes for 130 yards and three touchdowns.

With absolutely no disrespect intended for Notre Dame, but there just wasn’t much to dissect from that rout. The better team won.

Ohio State’s 49-28 win over Clemson? That game was, somehow, not even as close as the final score would indicate. After trading a few touchdowns, the Buckeyes scored 28 straight points and put the Tigers in their rearview mirror.

But unlike the first semifinal game, there was one flashpoint during the Ohio State-Clemson game that sparked a fierce debate about the rules of football.

James Skalski was called for targeting and ejected after this hit on Justin Fields. pic.twitter.com/0oqTQCTEDi

Late in the second quarter, Clemson linebacker James Skalski was ejected after a hit he laid on Buckeyes quarterback Justin Fields.

Not only was the hit momentous in and of itself, turning the embers of Ohio State’s momentum into a raging inferno (the game was never closer than 14 points after that drive), but the circumstances surrounding the hit sparked genuine debate among ardent sports fans.

Some, such as former NFL and University of Connecticut quarterback Dan Orlovsky and professional ESPN loudmouth Stephen A. Smith, felt that the targeting rule in college football had gone too far.

This is straight B.S. for the second straight year in the playoffs this kid from @ClemsonFB named Skalski is ejected for “Targeting.” What is the guy suppose to do? Stand straight up and tackle? I mean, come on! What B.S. I feel so bad for that kid. Why even play defense.#Damn!

RELATED: AOC Complains About Abortion Law, NFL Star Steps In and Shuts Her Down with Lesson About ‘Simple Biology’

I feel sick for Skalski

That was a football hit. Not dirty, no head hunting. No trash talking after.

The rule is flawed.

Others, such as noted Fox Sports 1 provocateur Skip Bayless, felt that it was the right call according to the letter of the law.

The rule is the rule, and it’s designed to protect the defensive player as well as the offensive. But I don’t think targeting should include leading with the crown of the helmet below the neck. Skalski’s hit on Fields was a good football play on a QB who didn’t give himself up.

James Skalski’s ejection is the right call via the rulebook’s terms.

“No player shall target and make forcible contact against an opponent with the crown of his helmet” is part of what the rule says.

If you’re upset that Skalski was tossed, take it up with the rulebook. pic.twitter.com/ukAXacEjXJ

Both viewpoints certainly have some merit to them.

On the one hand, it’s not entirely clear what else Skalski could have done in that moment. Had Fields not been contorting his body to fight for extra yards, it appears Skalski would’ve hit him with his shoulder and not the crown of his helmet.

On the other hand, by the definition of the rules, Skalski did make “forcible contact” with the crown of his helmet. And unfortunately for Skalski, he might not be getting much benefit of the doubt from the refs given what he did in last year’s College Football Playoff championship game.

Here’s Skalski’s targeting. It’s the right call based on the rule, but it’s also a tough break on a not brutal play in the #NationalChampionship. #Clemson #LSU #CLEMvsLSU pic.twitter.com/CMURE3EfNY

In essence, the online arguments over Skalski’s ejection can be distilled into a few key talking points, all of which are worthy of debate.

Some feel that the rules are the rules. Period. That being said, there are some in that camp who feel that those rules need to be tweaked or changed, given that an automatic ejection is a massive and significant call in a game.

Others feel that the call was just abjectly horrible and completely ignores the spirit of the rule. Those are the generally same people who feel that these targeting calls are the death knell of football, paving the way for the “wussification” of the sport as it slowly morphs into flag football.

As long as the targeting rule remains as it is in college football, these debates are not dying down anytime soon.

Which side of the argument do you fall on?