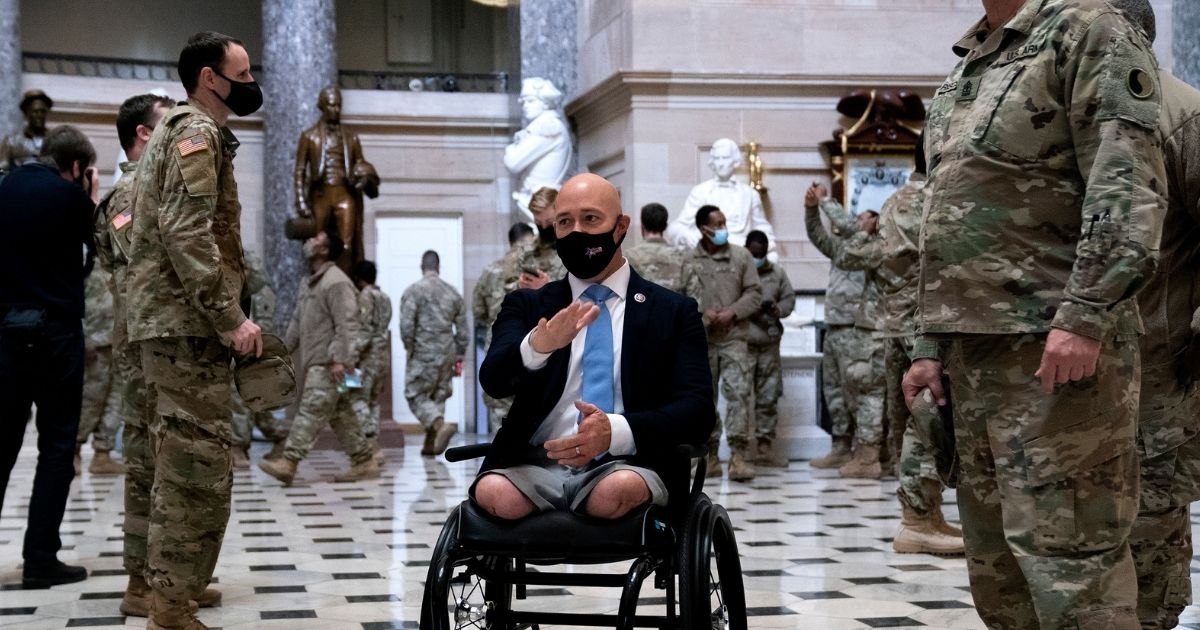 Brian Mast has already given two legs in the service of his country.

Now in his second term in Congress, he’s given more in public service than most Americans ever will.

On Thursday, he gave CNN’s Jake Tapper a lesson in democracy – and class.

The Florida Republican was responding to a snide aside Tapper delivered Wednesday night during a panel discussion about last week’s violent incursion by supporters of President in the nation’s Capitol.

CNN host Dana Bash noted that video showed some of those involved in the incursion had said Trump told his followers to go to the Capitol – as though that were proof that Trump was responsible for what followed.

Tapper picked up on that and – with the offensive smugness affected superiority of a liberal late-night comedian playing to an ignorant audience – proceeded to call into question the values of a double-amputee who nearly died in military service to his country.

“Congressman Brian Mast, a Republican from Florida — who lost his legs, by the way, fighting for democracy abroad, although I don’t know … about his commitment to it here in the United States, he said, ‘Did anybody say that?’” Tapper said,

I lost two legs for @jaketapper‘s right to say whatever the hell he wants, but that free speech also protects the Republicans he is so eager to condemn for asking Constitutional questions about the election. https://t.co/ViNrwz9cbU

“I lost two legs [email protected]’s right to say whatever the hell he wants,” he wrote, “but that free speech also protects the Republicans he is so eager to condemn for asking Constitutional questions about the election.”

Tapper’s response to that was just as insulting as his first comment.

After a perfunctory expression of gratitude for Mast’s service that came off as grudging and dismissive – “as I’ve said before” doesn’t exactly scream sincerity so much as annoyance – Tapper wrote that “i question the commitment to democracy of anyone who spread election lies, signed onto that deranged TX AG lawsuit, and voted to commit sedition. You were not just asking questions.”

You’re a hero for your service and I’m grateful, as I’ve said before. And yes i question the commitment to democracy of anyone who spread election lies, signed onto that deranged TX AG lawsuit, and voted to commit sedition. You were not just asking questions.

In a “Fox & Friends” interview Thursday, Mast gave that a better answer than it deserved.

First he dealt with the initial talk about the Jan. 6 incursion.

“OK, the president told you to come to the people’s house, did he tell you to do it violently? Or did he tell you to go there and cheer people on, or what, but it’s worth getting to the bottom of before you rush to judgment and that’s the foundation of democracy,” Mast said.

That, of course, is key to the whole farce of the Democrats’ second impeachment effort against Trump. Trump urged his followers to make their voices heard – not to trash Nancy Pelosi’s office in a moment of juvenile outrage more suited to the thuggish left end of the political spectrum.

If urging followers to demonstrate their beliefs is “incitement of insurrection” worthy of impeachment and disqualification from holding federal office, there are many Democrats in Congress right now – like, say, Maxine Waters – who wouldn’t be under the Capitol dome as anything but tourists.

But there was more to Mast’s message – something Tapper’s CNN audience might not understand, but will no doubt resonate with the countless millions of Americans who now find themselves being talked about like domestic terrorists for the crime of supporting the incumbent president.

“I’m gonna say to Mr. Tapper the same thing that half of America is saying right now, hold me to a high standard – don’t hold me to a double standard,” said Mast, who lost his legs to an improvised explosive device while serving with the Army in Afghanistan in 2010.

Do you think Tapper’s comments were out of line?

But as the saying goes about the left, if it weren’t for double standards, they’d have no standards at all.

As Rep. Jim Jordan of Ohio pointed out so powerfully on the House floor on Wednesday, the Democratic Party that spent most of 2020 praising the rioters who wreaked havoc on American cities is now trying to claim the moral high ground against Republicans over the woefully misguided actions of a tiny percentage of Trump’s nearly 75 million voters.

And mainstream media talking heads like Tapper are all too willing to play along.

At the end of the “Fox & Friends” interview, host Steve Doocy asked Mast to respond specifically to Tapper’s caustic comment. His words were obviously heartfelt.

“My commitment to democracy and to my country is unwavering, I love this place so much it literally breaks my heart to see the divide that exists in it, I love our democracy for all of our problems there is no government that I would rather be a part of anywhere in this world, and to strengthen that and keep it strong, we have to ask those questions,” Mast said.

“It’s not the opposite of that, where we don’t ask those questions, don’t ask lawmaker, ‘Did you take the time to ask somebody or interview somebody or have a hearing?’ That has to be the foundation of having justice is asking questions and waiting for the answer in silence until somebody gives it to you, or taking their silence as an answer. That’s my response. I love this place.”

That’s a statement coming from a man who has two artificial legs to prove his words.

As the country prepares for a Joe Biden presidency, with a House and Senate run by a Democratic Party in the throes of a leftward lurch, they’re going to be worth remembering.

Americans who love their country are in for a tough couple of years of proving it – and eventually getting it back.