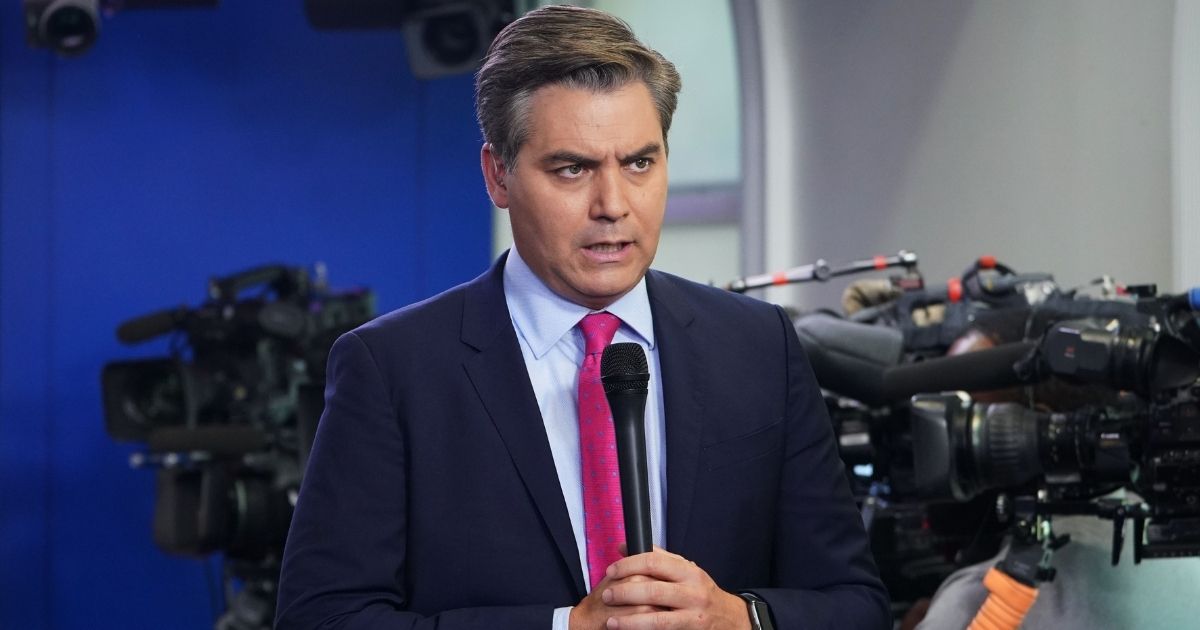 CNN’s Jim Acosta is considered one of the deans of White House correspondent-dom. He was omnipresent during the Trump years, giving a Brylcreem-ed sheen to CNN’s Very Serious Reporting™ from both the White House and President Donald Trump’s activities elsewhere. His frown let left-bubble America know he understood how horrible things were right now.

Given the transition to the Joe Biden administration and the inflection point America seems to be at, one wondered where this would take Acosta’s reporting.

The answer is: away from the White House.

“On to the next adventure! After eight years at WH, I’m moving into a new role as anchor on weekends and chief domestic correspondent for @CNN, a new challenge I’m very excited about,” Acosta tweeted Monday.

“Will miss my WH colleagues. But I know they’ll be great covering the Biden admin. See you soon!”

On to the next adventure! After eight years at WH, I’m moving into a new role as anchor on weekends and chief domestic correspondent for @CNN, a new challenge I’m very excited about. Will miss my WH colleagues. But I know they’ll be great covering the Biden admin. See you soon!

According to an article on CNN, in which the network covered its own internal moves as if they were serious news, Kaitlan Collins will be the new chief White House correspondent.

“Acosta, CNN’s chief White House correspondent during the Trump years and a frequent target of the outgoing president, will become chief domestic correspondent along with a weekend anchor role. His time slot will be announced soon,” the article read.

At the beginning of what was basically a long media release was this telling paragraph: “The new assignments all point in a hard news direction as CNN transitions from the Trump years to the Biden years. All the major television networks typically make anchor and reporter changes around the time of a presidential transition.” [Emphasis mine.]

Wow, it’s almost as if they’re saying their coverage during the Trump years wasn’t hard news but fulminating infotainment instead.

And look at who was congratulating Acosta on the move.

congratulations, though now i have to watch news on the weekend.

Then we had Joe Walsh — not the Eagles guitarist but the former one-term congressman from Illinois and tea party figure. Walsh, somehow less tolerable than a member of the Eagles, became a radio host, turned into a prominent NeverTrumper and then launched an adorable 2020 primary campaign against the president.

Here was Mark Hamill, best known as Luke Skywalker in the “Star Wars” franchise and as a prominent anti-Trump voice on Twitter:

Thanks for your unwavering strength reporting in a hostile environment the last 4 years & congratulations Mr. Anchorman!

And here’s Scott Dworkin, head of the Democratic Coalition, saying he was looking forward to coming on Acosta’s new show:

Thank you for everything man. This is so well deserved. Cant wait to come on your show! 😷👍🇺🇸

You get the idea. This wasn’t just his colleagues congratulating him, but liberals telling him, “Well done, good and faithful servant.”

“It certainly seems odd that CNN is pulling Acosta from the White House rotation right as a Democratic president is set to take office,” Amber Athey, who worked alongside Acosta when she was the Daily Caller’s White House correspondent, told Fox News. “He insisted repeatedly that his style of shouting questions, delivering monologues and heckling White House officials was merely about holding powerful people accountable for their actions.

“Is CNN effectively saying that they don’t want to hold the Biden administration accountable in the same way?”

Of course. Everyone congratulating him all knew what CNN is essentially admitting: Acosta’s role wasn’t as a reporter but as someone whose bickering with the president made for great ratings. Bickering with Biden won’t go so well — and, indeed, it’s been difficult to find many in the media who will take that role on so far — and vigorously agreeing with him doesn’t make for good ratings.

Thus, CNN is taking a “hard news direction,” which is as hilarious of an unintentional confession I’ve ever seen a news network make about its own reportage. Acosta doesn’t fit there, so he’s going to be the chief domestic anchor as well as a weekend host.

Is CNN too partisan?

If you’ve ever seen the weekend lineups on cable — no disrespect to Joy Reid, Jedidiah Bila or Al Sharpton — you know that’s not exactly where the A-team plays.

In the film “Good Night and Good Luck,” when newsman Edward R. Murrow was told by CBS News boss William Paley that he was being moved to a slot on Sunday afternoons, his response was, “Why don’t you just fire me, Bill?”

It’s impossible to say what his response would have been if Twitter were around, except going back in time and telling Edward R. Murrow about Twitter likely would have just made him smoke more.

However, I don’t think he would have called it his “next adventure.”

Perhaps chief domestic correspondent ends up being a promotion for Acosta and he ends up furthering his career. It sounds a bit more like he’s a man whose only core competency — the ability to antagonize people inside the Trump administration — is going to become very obsolete come Jan. 20.