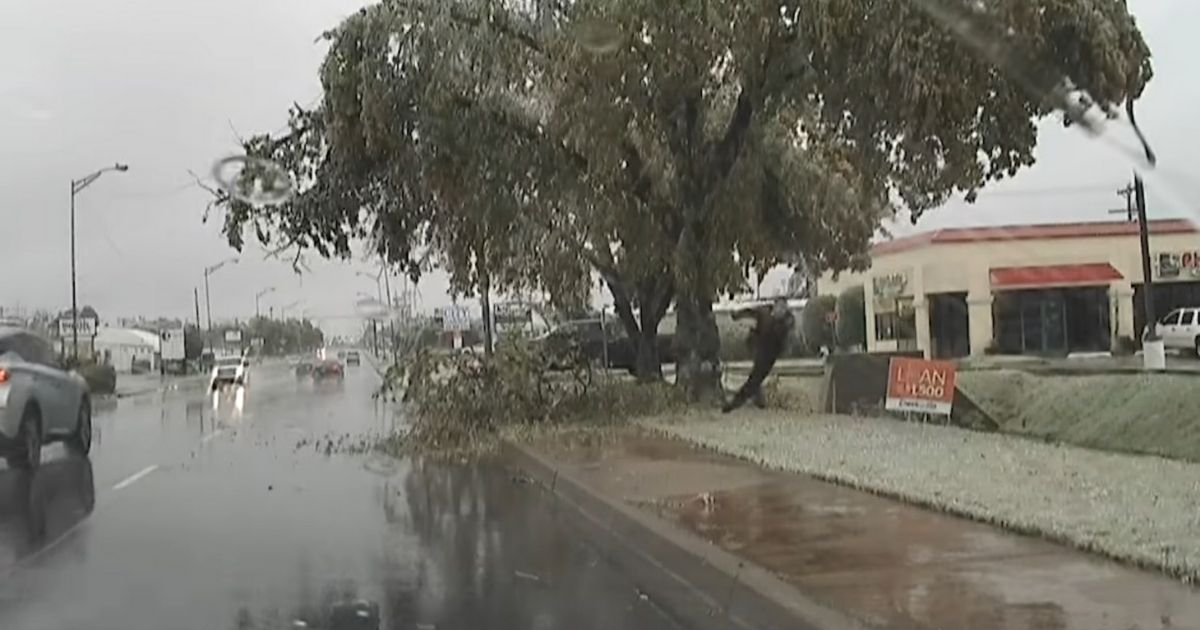 Edmond, Oklahoma, has seen some nasty weather this week that has dampened spirits, but one police officer has been able to inject some humor back into the community, despite his wounded pride.

Tree branches and entire trees were crashing down this week during what has been termed a “historic ice storm,” according to KWTV-DT.

More than a thousand people were left without power, and a woman who’s lived in Edmond for over two decades said she’s “never seen it this bad” before.

The City of Edmond Twitter account kept tweeting updates about the storm conditions, keeping people apprised of the damage.

“This is the most tedious part of the recovery effort, so we thank those that have been out of power for an extended period for your patience & understanding.”

2:30 pm – Crews continue working through the city removing tree limbs and rebuilding damaged infrastructure. This is the most tedious part of the recovery effort, so we thank those that have been out of power for an extended period for your patience & understanding.

One officer who was helping tidy up his community got a little more than he gambled for when he tried to move a fallen tree branch out of the road and off a sidewalk.

His car’s camera caught the whole thing on tape, much to our amusement and his good-humored shame.

The video shows him walking up to the limb, sizing it up, and trying to drag it away from the road by one of its largest and lowest branches.

But instead of cooperating, the branch snaps off — and the police officer stumbles backward, directly into a ditch.

The officer himself grins sheepishly as he picks himself up and climbs up the embankment. Another cop even drives up to assist, grinning the whole time.

“It’s been a rough few days for our state, and we thought you could use a laugh! Don’t worry…Other than his pride, our officer is not seriously injured.”

Based on the comments, the clip was just what the doctor ordered. It wasn’t long before the punsters showed up.

“Thank you for ‘taking the fall,’” wrote one. “Looks like something that would happen to you-know-who!”

“The tree limb was booked into county for assaulting an officer,” wrote another.

“Arrest that tree!! But seriously it’s nice to see police officers going out on a limb. He is a credit to his branch,” commented a third.

A woman who appears to be the officer’s wife shared the video as well, writing “As a gymnastics coach, I guess I need to teach him to tuck and roll.”

She reassured viewers that although his pride was a bit damaged, his sportsmanship was in fine form. Thankfully he wasn’t actually injured but has managed to give people some light and cheer during a rather dreary time.