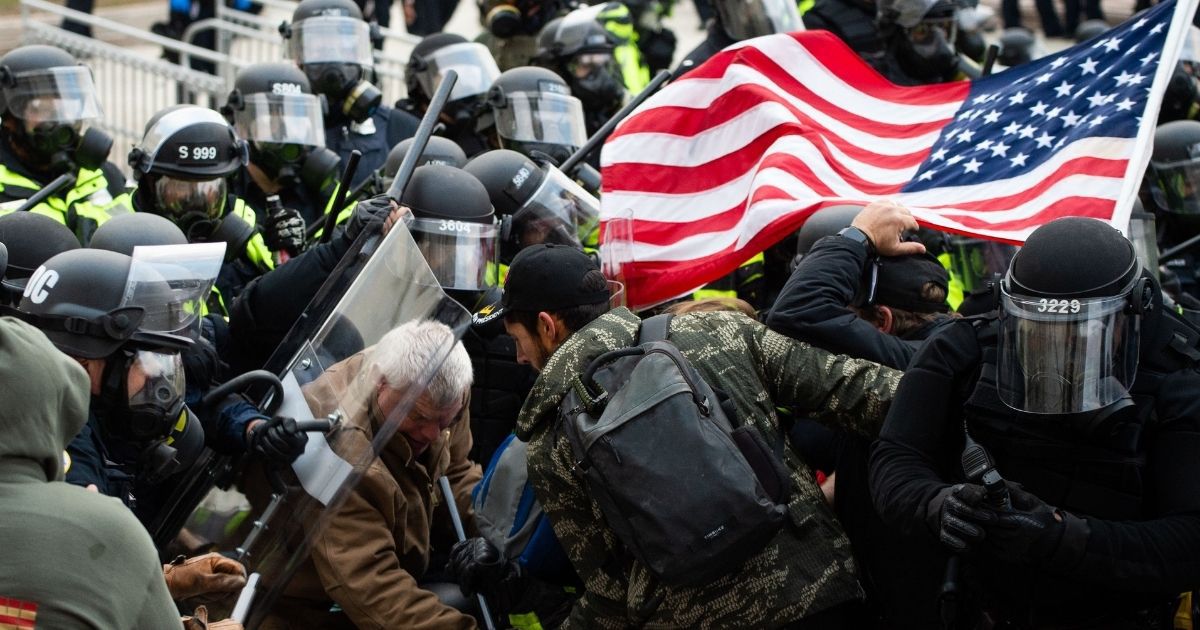 A Capitol Police officer who was injured as rioters smashed their way into the U.S. Capitol died Thursday night, bringing the death toll from Wednesday’s Capitol incursion to five.

“United States Capitol Police Officer Brian D. Sicknick passed away due to injuries sustained while on-duty,” the Capitol Police said in a statement.

“Officer Sicknick was responding to the riots on Wednesday, January 6, 2021, at the U.S. Capitol and was injured while physically engaging with protesters. He returned to his division office and collapsed. He was taken to a local hospital where he succumbed to his injuries,” the statement said.

This is Capitol Police Officer Brian Sicknick who died after he was attacked by rioters. He was 42 pic.twitter.com/z1iYVL2Lf2

Sicknick was the fourth Capitol Police officer in the force’s history to die in the line of duty, according to The New York Times.

The Times reported that Sicknick was “struck with a fire extinguisher,” citing as its source “two law enforcement officials” who were not identified.

Police officers and emergency response personnel lined Constitution Avenue on Thursday night as a police motorcade for Sicknick drove past.

Steven Sund, who has submitted his resignation as chief of the Capitol Police due to the events of Wednesday, issued a statement Thursday in which he defended the actions of his officers, saying they “responded valiantly when faced with thousands of individuals involved in violent riotous actions as they stormed the United States Capitol Building.”

“These individuals actively attacked United States Capitol Police Officers and other uniformed law enforcement officers with metal pipes, discharged chemical irritants, and took up other weapons against our officers. They were determined to enter into the Capitol Building by causing great damage,” he said in the statement.

“The violent attack on the U.S. Capitol was unlike any I have ever experienced in my 30 years in law enforcement here in Washington, D.C.,” Sund said.

“The actions of the USCP officers were heroic given the situation they faced, and I continue to have tremendous respect in the professionalism and dedication of the women and men of the United States Capitol Police.”

Metropolitan Police Department Chief Robert Contee III said Thursday that 56 members of his force were injured Wednesday, including one officer who was beaten and tased, according to the New York Daily News.

The Capitol Police have jurisdiction over the Capitol building and its environs, while the Metropolitan police patrol outside the Capitol complex. Officers from both forces responded to the chaos caused by Wednesday’s riot.

Michael Sherwin, acting U.S. attorney for the District of Columbia, said some who entered the Capitol were armed, while others stole sensitive materials, according to NPR.

“Electronic items were stolen from senators’ offices. Documents, materials were stolen, and we have to identify what was done, mitigate that, and it could have potential national security equities,” Sherwin said.

He said 68 people have been arrested to date.