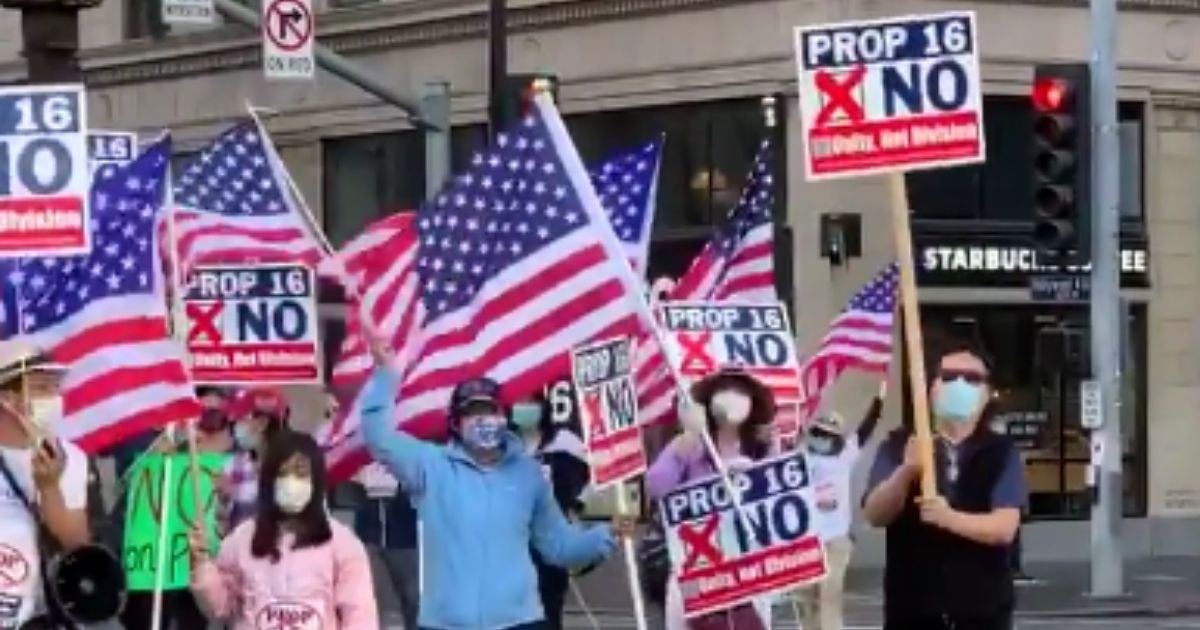 California ballot Proposition 16, aimed at allowing discrimination-based race and gender hiring in public employment and public education, looks as if it will go down in flames next week, based on a new poll.

In 1996, Californians amended their constitution through the adoption of Proposition 209, which provides that the state “shall not discriminate against, or grant preferential treatment to, any individual or group on the basis of race, sex, color, ethnicity, or national origin in the operation of public employment, public education, or public contracting.”

In other words, Proposition 209 “banned the use of affirmative action involving race-based or sex-based preferences in California,” according to Ballotpedia.

Proposition 16 would remove this language from the state’s constitution.

Proposition 209 passed by approximately 55 to 45 percent.

A poll released Monday by the University of California at Berkeley’s Institute of Governmental Studies finds only 38 percent support Proposition 16, while 49 percent are opposed and 13 percent are undecided.

The poll, conducted Oct. 16-21, included 6,686 California registered voters, 5,352 of whom “were considered likely to vote or had already voted in this year’s election.”

Do you think Proposition 16 is a bad idea?

The margin of error is +/- 2 percentage points.

Proposition 16 enjoys the backing of the Golden State’s most prominent Democratic Party politicians, including U.S. Senators Kamala Harris and Dianne Feinstein, along with the majority of California’s congressional delegation.

Republicans surveyed in the UC Berkeley poll are decidedly against the ballot measure, 86 to 6 percent. Further, a majority of those listing no party preference (independents) oppose it, too: 54 to 33 percent.

Even among Democrats, there is a surprising level of opposition, 26 percent, compared with 57 percent for it.

There is significant opposition to Proposition 16 among minority groups, with more Latinos opposing than supporting it, 42 to 40 percent, and Asian-Americans even more so, 50 to 39 percent.

Today’s No #Prop16 Rally in Hollywood is the 24th No #Prop16 rally! Yes16 has 20 million from a handful billionaires and special interests unions. No16 only has 1 million from 6000 people. This is a fight between David and giant Goliath. And I’m sure you know who won at the end. pic.twitter.com/vyNIlKBUAL

However, a majority of African-Americans surveyed would like to see the measure passed, 58 to 33 percent.

Kali Fontanilla, a school teacher and a daughter of a Jamaican immigrant, opposes Proposition 16.

“I want to get into the UCs [the University of California system] based on merit. Based on my own hard work, and not on the color of my skin,” she told KRCR-TV.

“Prop 16 will do more harm than good. We need to work hard, not relying our skin”

“Personally, look, I’ve seen many times when standards are lowered, that it really actually hurts minorities rather than helps,” Fontanilla added.

Californians opposing Proposition 16 are living up to the highest ideals of the Declaration of Independence, which calls for all to be treated equally, with no preferences.

As Dr. Martin Luther King Jr. said in his famous “I Have a Dream” speech in 1963, America should be a place where people are judged not “by the color of their skin but by the content of their character.”

Proposition 16 would work against that goal and should be rejected.