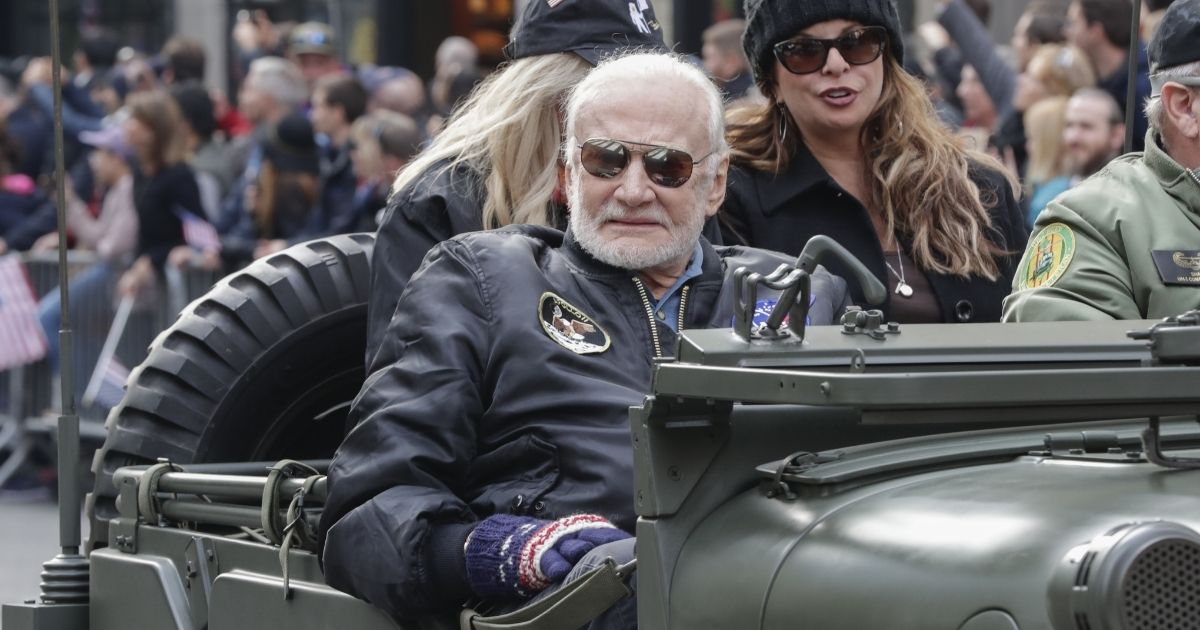 More than 50 years past the height of his fame in the legendary Apollo 11 moon landing, astronaut Buzz Aldrin can still cause a buzz in the political world.

The man whose lunar salute to the American flag is etched in the national memory jumped very much into the political present on Friday with a Twitter post predicting victory for Republican Arizona Sen. Martha McSally in her tightly contested election fight.

And the fact that Aldrin — a national hero by any accounting — used fighter-pilot lingo in his post made the move no doubt McSally’s coolest endorsement yet.

TRENDING: CNN’s Van Jones: Trump ‘Does Not Get Enough Credit’ for ‘Good Stuff He Has Done for the Black Community’

12 o’clock is straight ahead. 6 o’clock is behind. Fighter pilots understand what “check six” means in FTR lingo talk.
Martha, wave as you move ahead past Mark, to 12 o’clock, and you win for Arizona!

“12 o’clock is straight ahead. 6 o’clock is behind. Fighter pilots understand what ‘check six’ means in FTR lingo talk. Martha, wave as you move ahead past Mark, to 12 o’clock, and you win for Arizona!”

In other words, McSally is putting Kelly in her exhaust en route to re-election to the Senate seat she’s filled since January 2019 (formerly held by the late Republican Sen. John McCain, the seat was filled first by former Republican Sen. Jon Kyl.)

In endorsing McSally, Aldrin is doing more than taking sides against a fellow astronaut (Kelly is a U.S. Navy captain whose service with NASA included three space shuttle missions as well as time aboard the International Space Station, according to Space.com).

Aldrin was stepping into one of the fiercest Senate fights of the 2020 election year — and on the underdog’s side at that.

McSally, a special target of the liberal media in Washington — has been trailing Kelly in polls throughout most of the campaign and was behind in the RealClearPolitics polling average by 5.6 points as of Friday.

However, two polls reported by Breitbart on Friday showed McSally ahead of Kelly. And McSally, a former Air Force fighter pilot who was the first American woman to fly in combat, shows no sign of going down without a fight.

She welcomed Aldrin’s backing in a Twitter response that alluded to Aldrin’s own career, not only as an astronaut but as a fighter pilot during the Korean War (where he earned the Distinguished Flying Cross).

Absolute honor to have the support of hero astronaut Buzz Aldrin in this mission!

We must hold this seat, the Senate, and save the country. It’s a dog fight, and as we fighter pilots say: Fight’s On! 🇺🇸 https://t.co/np7Nu1Kt9i

“Absolute honor to have the support of hero astronaut Buzz Aldrin in this mission!” she wrote.

“We must hold this seat, the Senate, and save the country. It’s a dog fight, and as we fighter pilots say: Fight’s On!”

And there’s no question that McSally has a fight on her hands against Kelly — who is best known for being the husband of former Democratic Rep. Gabbie Gifford and a dangerously outspoken attacker against the Second Amendment.

He’s used Gifford’s shooting in January 2011 as an argument to strip gun rights of all Americans. The shooting was regrettable, of course. But the political ends liberals have used it for have been a disgrace.

But Aldrin is a household name and a man who has no compunction about demonstrating his pride in his country. His very public disapproval of the 2018 movie “First Man,” which depicted the moon landing but deliberately omitted Aldrin’s flag-salute scene, could well have been one reason the movie was a box office disappointment.

More than 50 years after Aldrin sealed a place in American hearts thanks to the matchless courage of the Apollo astronauts, he’s still setting an example for the country.

Conservatives can only hope Arizona voters will follow it, for their own sake, and the sake of the rest of the United States.