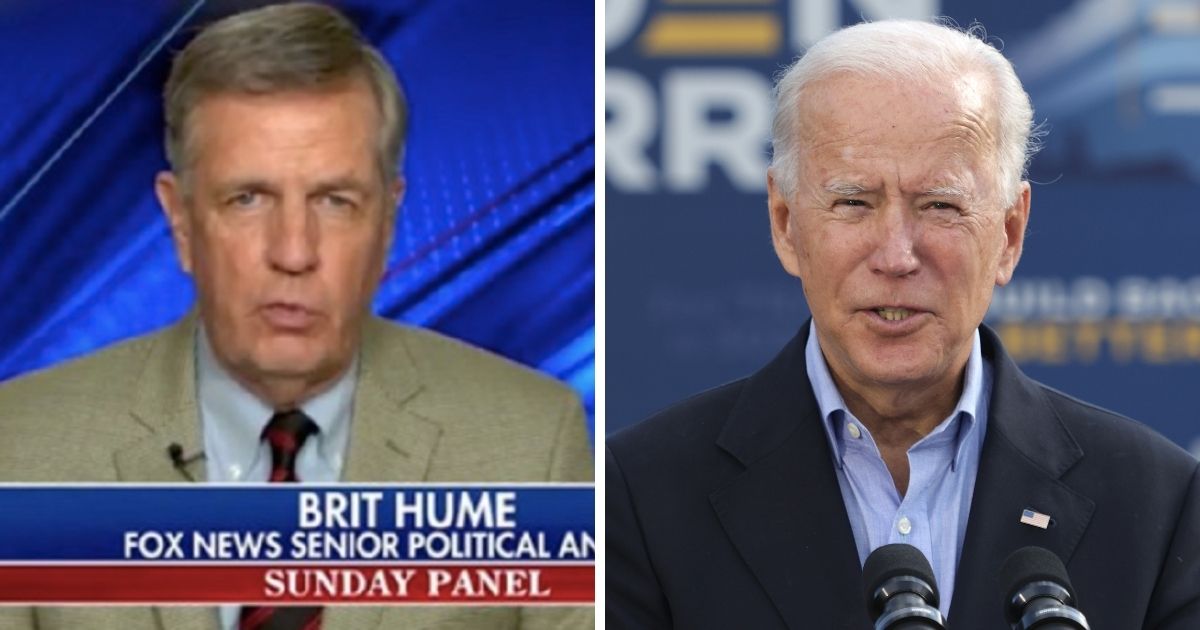 Three weeks out from the presidential election, their candidate is a man whose mental capacity stopped being reliable a long time ago.

And while President Donald Trump is clearly facing a challenge in most mainstream media polling, the challenge facing the Biden campaign, is arguably even bigger: Keeping the American public convinced the party’s standard bearer isn’t well on the road to senility.

Hume made the statement at the end of a “Fox News Sunday” panel discussion, after being asked by host Chris Wallace about the state of the presidential campaign.

Hume’s response acknowledged that Trump might be playing from behind at the moment, but what he followed with could not have been comforting to Democratic nominee Joe Biden’s campaign, or Americans watching the campaign unfold.

TRENDING: Pompeo Drops Clinton Bombshell: ‘We’ve Got the Emails, We’re Getting Them Out’

“I think [Trump] is in a place where the only thing that might save him would be a performance or several performances by Joe Biden in which his senility, which I think has been obvious to careful watchers for some time, becomes utterly obvious that people begin to say, ‘wait a minute, we really can’t have this guy in the White House,” Hume said (video at RealClearPolitics here).

“I think that’s [Trump’s] best hope but that means more debates, and let Biden talk, because the longer he talks, the greater the chance of it showing through are.”

Brit Hume: Joe Biden’s ‘senility … has been obvious to careful watchers for some time’ @washtimes https://t.co/akUfOXbRaa

The response apparently didn’t sit well with Wallace, who called Hume’s statement “controversial,” before acknowledging, “but that’s your view and you’re entitled to it.”

Actually, the only “controversial” aspect of the discussion was Wallace calling it controversial.

At this point, anyone who has followed Biden’s public statements over the course of the campaign has to acknowledge that there are serious questions about his mental state.

His gaffes have ranged from ludicrous — like apparently forgetting the name of the president he served for eight years — to almost unbelievable detached — like wildly misstating the number of American deaths, military and civilian, attributed to the coronavirus.

Garden-variety misstatements — for Biden — like botching references to foundational American documents or mixing up what state he happens to be in at any given time have become almost the norm.

Democrats and Trump-loathers in the media like to either ignore Biden’s evident mental frailties, or try to explain them away as the result of the pressure of a presidential campaign, but the real truth is more obvious: Biden is simply not the same sharp mind that spent a career in the Senate and was appointed vice president of the United States.

There were plenty of those defenders out in force on social media after Hume’s “the-emperor’s-got-no-clothes” comment, of course. There always are. But Hume had backers, too.

@jaketapper Finally an honest reporter – Brit Hume referred to Biden’s senility on Chris W.’s show this a.m. When will you CNN “puppets” get some guts and let the public know what you must already know well.

Nasty Democrat #ChrisWallace criticized a real journalist @brithume for having “controversial view” re @JoeBiden being senile. Chris was rude to a well respected colleague. No surprise. #maga2020 #election2020

In my Sunday morning channel switching, @BritHume was the star. He doesn’t hold back about #JoeBiden‘s obvious senility or refusal to be honest with American voters on packing the court.

“Let him talk” is excellent advice for Trump. Biden’s mental deterioration will be clear.

That last tweet, praising Hume’s advice to Trump for the next presidential debate — assuming there is one — was dead on.

Whatever the merits or drawbacks of Trump’s aggressive style in the first debate, it never gave Biden a chance to go off on one of his signature rambles — where evidence of his diminished faculties would become evident.

Do you agree with Brit Hume about Biden’s “senility”?

Wallace, a journalist who failed by every standard in his job as moderator of the first debate (his evident siding with Biden reached the point where the two shared a laugh at Trump’s expense at one point) might have thought it was “controversial” for Hume to describe Biden’s failings as “senility.”

But it’s a good deal more damning for a major political party, an entire mainstream media complex, and Hollywood celebrities to pretend that what is happening in front of the entire country isn’t happening at all.

The truth, as Hume put it, has been “obvious to careful watchers for some time.”

It’s not Hume’s fault, or Trump’s fault, if the American mainstream media doesn’t care to tell it.