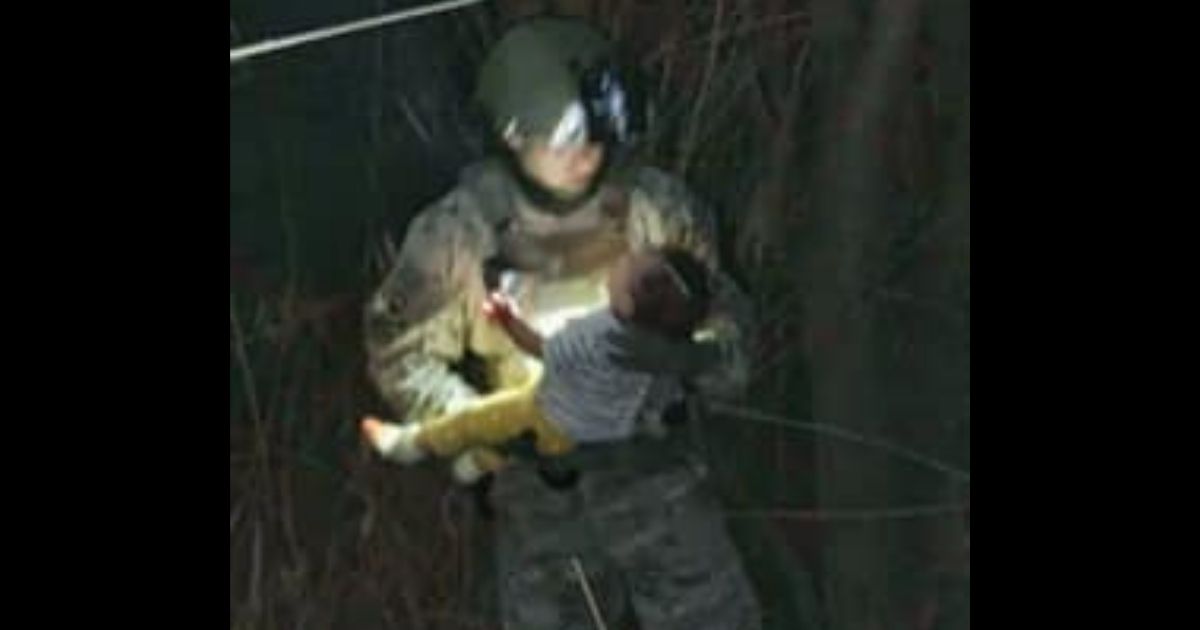 If you want to see the ugly side of President Joe Biden’s “humane” immigration policy, all you have to do is look at what happened in Roma, Texas, on March 16.

According to a report from the Texas Department of Public Safety, that’s where Texas Rangers and Border Patrol agents pulled a baby out of the Rio Grande after she was thrown out by human traffickers.

The Department of Public Safety released a photo of the rescue Tuesday.

In a Facebook post, the Department of Public Safety said the child “had been thrown out of a raft and into the Rio Grande River by smugglers. The child’s mother had been assaulted by smugglers in Mexico, resulting in a broken leg.

The rescue was carried out by a member of the South Texas Special Operations Group, Texas Rangers Division.

“This specialized group is a highly trained tactical team whose primary responsibility is to carry out specific missions, usually along the Texas-Mexico border region or wherever needed,” the Department of Public Safety said in a Facebook post.

“The team is designed to conduct both overt and extended covert operations in remote areas where conventional law enforcement cannot operate. The [team’s] focus is to gather intelligence, conduct interdiction, and disruption of criminal activity usually associated with drug cartels.”

While illegal immigration and human smuggling have long been an issue at our southern border, the sheer numbers of illegal immigrants we’re currently seeing — as well as the number of child migrants — are entirely the doing of the Biden administration.

And the numbers are staggering indeed.

According to NBC News, in May 2019, when then-President Donald Trump’s administration was experiencing its worst border crisis, the number of encounters the Border Patrol had with migrants — an encounter being either an apprehension of someone illegally crossing the border or an individual presenting himself or herself at the border without the requisite paperwork — was roughly 144,000. This month alone, that number is expected to be over 150,000.

Furthermore, Customs and Border Protection estimates the number of unaccompanied migrant children could hit 26,000 by September, according to Axios. That’s in addition to the 16,000 estimated for March, which would be a record.

There’s a reason the current crisis is being driven by family units and unaccompanied minors, and it’s called Title 42.

Under the Trump administration, CBP could expel any migrant if detention facilities were full, based on the COVID-19 pandemic.

RELATED: Here’s the Sick Tactic Cartels Are Using to Smuggle Members Into the United States

The Biden administration has kept that mostly in place — except minors are now exempt, according to USA Today.

That’s beyond the fact that Biden invited this by making it clear his immigration policy was going to differ greatly from Donald Trump’s, pretty much to the furthest extent possible without making him unelectable. And human traffickers have taken advantage of that.

According to a March 14 report by The New York Times’ Maria Abi-Habib, “migrants’ hopes have been drummed up by human smugglers who promise that President Biden’s administration will welcome them.”

“Instead, the United States is expelling them back to Mexico, where they wait along with tens of thousands of others hoping to cross,” she reported. “The pressure, and desperation, is quickly building among families stuck in Mexico, as shelters and officials struggle to help them.”

“Many of the migrants said they had spent their life savings and gone into debt to pay coyotes — human smugglers — who had falsely promised them that the border was open after President Biden’s election.”

Many others try to cross illegally via the Rio Grande, like this mother and daughter. Not all of them are so lucky.

On Friday, Customs and Border Patrol issued a statement regarding a March 20 incident where three people became “stranded on an island on the Mexican side of the Rio Grande River” near Eagle Pass, Texas.

“Agents found the individuals and immediately began administering first aid while transporting the migrants to shore. Two of the three migrants regained [consciousness], a mother from Guatemala and her three-year-old child from Mexico,” the statement read.

“Agents attempted life saving efforts on the second child, a nine-year-old from Mexico and [transferred] care to the Eagle Pass Fire Department’s Emergency Medical Services. The child remained unresponsive and was pronounced deceased by medical professionals.”

A 6-month-old who almost drowned. A 9-year-old who did.