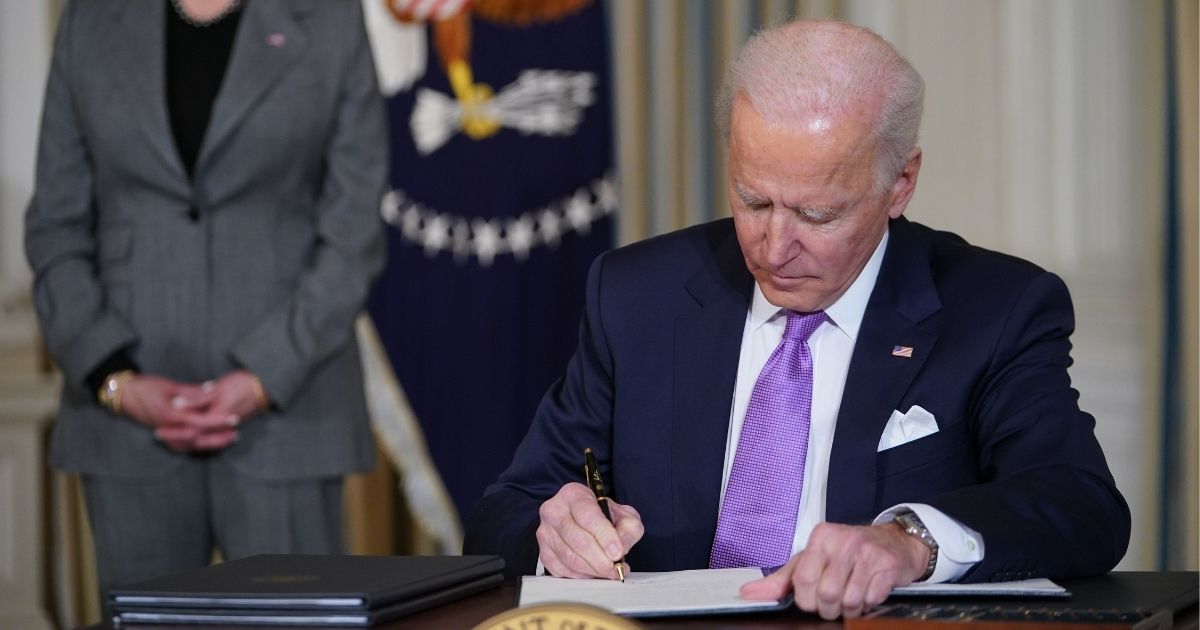 President Joe Biden wants to buy some new vehicles — about 645,000 of them.

As of 2019, the federal government operated 645,000 vehicles, with about a third operated by the U.S. Postal Service. Overall, the federal fleet was powered by 375 million gallons of gasoline, according to the General Services Administration, NBC News reported.

Biden foreshadowed his order on Monday. “The federal government also owns an enormous fleet of vehicles, which we’re going to replace with clean, electric vehicles made right here in America, by American workers,” he said, according to ABC News.

Robinson Meyer, writing in the Atlantic, said the action was as much political as practical.

“[T]his type of policy isn’t meant to reflect the present-day market so much as influence the country’s future political economy. It rewards two of Biden’s strategic constituencies: unions in the Upper Midwest and young climate advocates. It is practicable: Democrats can accomplish it using only their narrow congressional majorities and Biden’s authority as chief of the executive branch,” Meyer wrote.

“And it’s our first glimpse of Democrats’ new, souped-up approach to procurement policy, the catchall name for any action that uses the government’s power as a purchaser to create new markets and mainstream new technologies.”

Biden signaled his support for electric vehicles during the campaign.

“We’re going to make sure that we are able to take the federal fleet and turn it into a fleet that’s run on — they’re electric vehicles,” Biden said during the presidential debate in September, according to CNBC. “Making sure that we can do that, we’re gonna put 500,000 charging stations on all of the highways that we’re going to be building in the future.”

“Biden’s plan to replace the government’s fleet of 650,000 cars and trucks with electric vehicles assembled in the U.S…”

Problem: the US doesn’t make vehicles that match Biden’s requirements.https://t.co/V6S55WvX4j

What if in the next 4 years we purchased only EVs for a change?

Electrifying the USPS vehicle fleet in the next Congress would be great policy move.

But while the order puts electric vehicles in the fast lane, it sets up roadblocks on fossil fuels as Biden continues to issue executive orders at a frantic pace.

In part, Biden’s “Tackling the Climate Crisis at Home and Abroad” order “directs the Secretary of the Interior to pause on entering into new oil and natural gas leases on public lands or offshore waters to the extent possible, launch a rigorous review of all existing leasing and permitting practices related to fossil fuel development on public lands and waters, and identify steps that can be taken to double renewable energy production from offshore wind by 2030,” according to the White House fact sheet.

Coming after an initial angry reaction to a pause in leasing and drilling ordered last week, the fact sheet said Biden’s order “does not restrict energy activities on lands that the United States holds in trust for Tribes. The Secretary of the Interior will continue to consult with Tribes regarding the development and management of renewable and conventional energy resources, in conformance with the U.S. government’s trust responsibilities.”

Do you support all these executive orders?

The order also calls upon federal agencies to “eliminate fossil fuel subsidies as consistent with applicable law and identify new opportunities to spur innovation, commercialization, and deployment of clean energy technologies and infrastructure.”

Additionally, “the President has created a new position, the Special Presidential Envoy for Climate, which will have a seat on the National Security Council” and “it will be a U.S. priority to press for enhanced climate ambition and integration of climate considerations across a wide range of international fora.”

Biden said he will create what the fact sheet calls a “Civilian Climate Corps Initiative” with the goal of  putting a “new generation of Americans to work conserving and restoring public lands and waters, increasing reforestation, increasing carbon sequestration in the agricultural sector, protecting biodiversity, improving access to recreation, and addressing the changing climate.”

The order did not say where the money to fund the Climate Corps will come from.