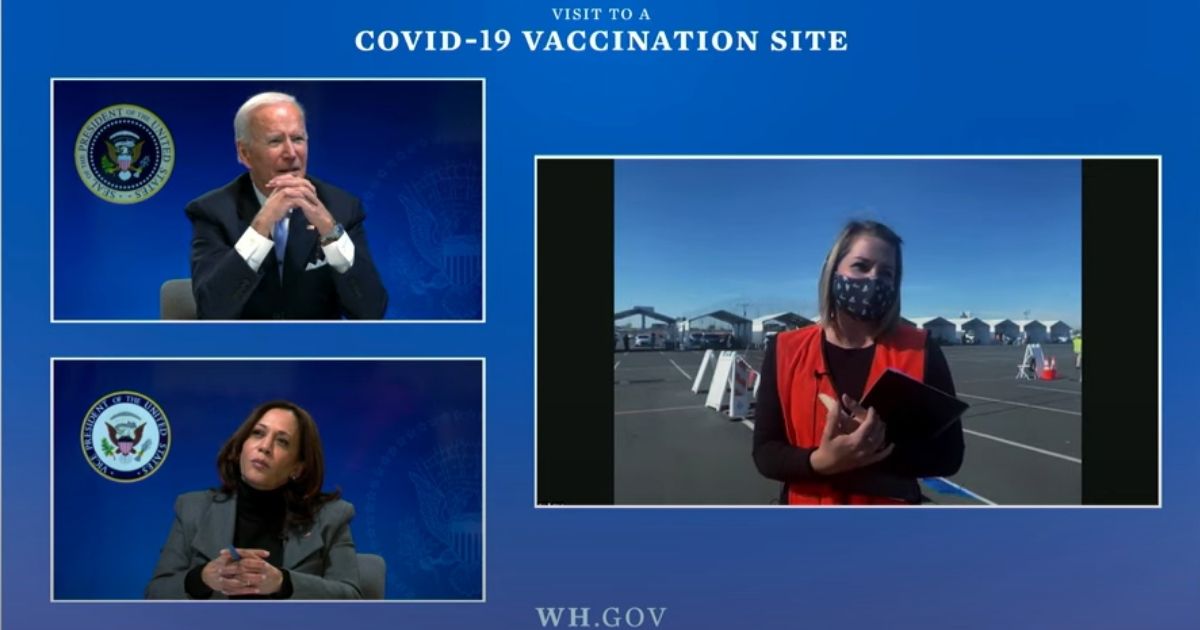 The phrase of “Creepy Joe” returned to the social media scene in force Monday after President Joe Biden had what the New York Post called an “awkward, flirty moment” with an Arizona nurse.

Biden and Vice President Kamala Harris took part Monday in a virtual tour of a COVID-19 vaccination clinic being set up at State Farm Stadium in Glendale, Arizona.

During the tour, they spoke with Brittney Hayes of Arizona State University.

“I’m the head charge nurse here at the vaccination pod at State Farm Stadium,” Hayes said when she introduced herself, according to a White House transcript of the event.

After she outlined how to vaccination clinic works, Biden had a question for Hayes, who wore a face mask throughout her conversation with Biden and Harris.

“Are you a freshman at the university?” Biden asked.

Biden has long been accused of being overly personal in his interactions with women, sometimes invading their personal space.

That led to Twitter erupting in “Creepy Joe” comments on Monday.

RELATED: Fact-Checkers Scramble to Cover for Joe Biden’s Transgender Agenda – Here’s What You Need to Know

Creepy Joe at it again. It’s never going to stop.

Equally creepy: Kamala sitting by, waiting to be called the co-President. #CreepyJoe https://t.co/bmTnfPSuCi

What professional woman wants to be infantilized like a receptionist on Mad Men… https://t.co/eqv36cjq4L

Women in health care are no stranger to sexists comments made my men, especially those in superior positions. https://t.co/QUGwUEsyQJ

During Monday’s virtual conversation, Biden had another question.

“Well,” he said, “I know having been a significant consumer of health care, I can tell — I know the vice president knows this, when I say it — doctors let you live, nurses make you want to live.

“If there’s any angels in heaven, they’re all nurses, male and female. And that’s not an exaggeration. That’s the God’s truth.”