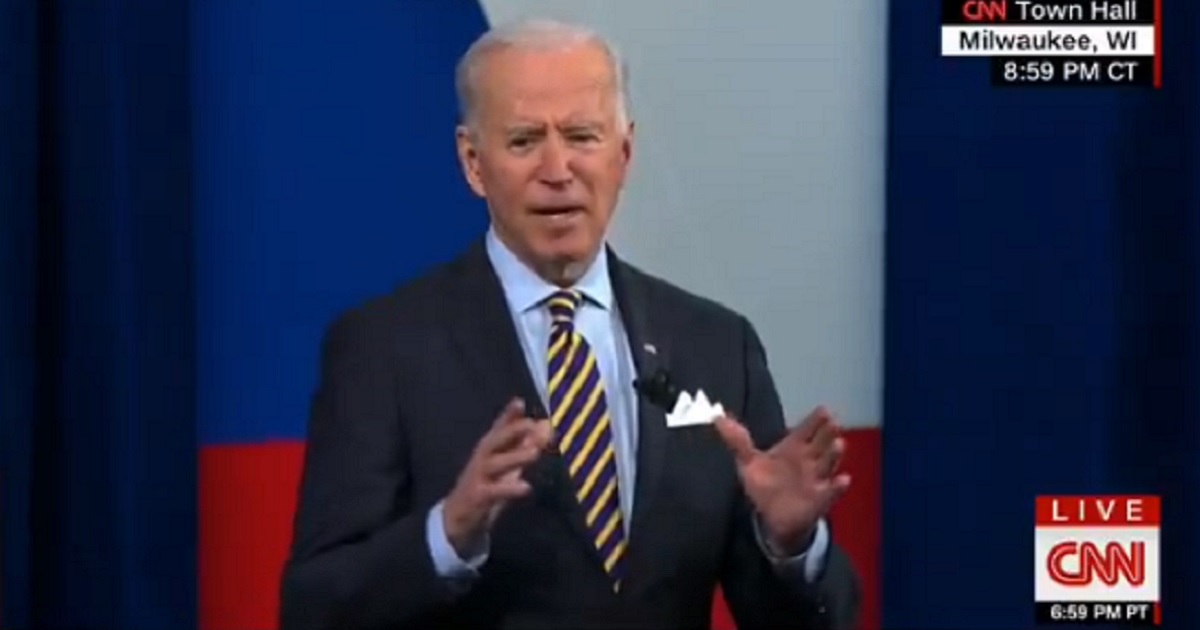 His own secretary of state calls it “genocide.”

And if nothing else came out of Biden’s already-embarrassing town hall meeting hosted by CNN Tuesday night, the revelation that an American president is willing to spout Chinese propaganda when it comes to the extermination of an ethnic group was a moment to remember.

The question arose when CNN’s Anderson Cooper – no mouthpiece of the militant right – asked Biden about his Feb. 10 conversation with Chinese President Xi Jinping.

Why is Joe Biden trying to explain away China’s human rights violations?

While discussing China’s actions in Hong Kong and the genocide against Uighurs, Biden disgracefully says, “culturally there are different norms”pic.twitter.com/TbF0GEm2xt

Specifically, Cooper asked about the Middle Kingdom’s oppression of the Uighurs, a mainly Muslim ethnic minority in China’s west. The population reportedly has been forced into internment camps, where systematic rape, torture, forced labor and forced sterilizations are commonplace.

In the final days of President Donald Trump’s administration, then-Secretary of State Mike Pompeo officially declared that China’s treatment of the Uighurs constituted “genocide and crimes against humanity.”

During his confirmation hearings Jan. 19, Biden’s then-nominee for secretary of state, Anthony Blinken, confirmed that assessment, according to the Washington Examiner.

Do you think the Biden administration is going to spend 4 years appeasing China?

But at Tuesday’s nationally televised town hall – which was watched closely in Beijing, no doubt – Biden had a considerably weaker take.

First, as a White House transcript shows, he responded with some wandering words that sounded like they came right out of the Chinese Communist Party’s propaganda manual — how the country’s history of being “victimized” by the outside world demonstrates the need for a “united, tightly controlled China.”

That was bad enough. What followed was worse:

“I point out to [Xi]: No American president can be sustained as a president if he doesn’t reflect the values of the United States,” Biden said, according to the transcript.

“And so the idea I’m not going to speak out against what he’s doing in Hong Kong, what he’s doing with the Uighurs in western mountains of China and Taiwan, trying to end the One China policy by making it forceful — I said — and by the — he said he — he gets it.  Culturally, there are different norms that each country and they — their leaders — are expected to follow.”

It’s been pretty well established – since the bloody destruction of the Nazi regime in 1945, at any rate – that the world, led by the United States, is supposed to take a dim view of the kind of genocidal “norms” that are being implemented in Jinping’s China.

Is the U.S. capable of imposing its own values on every other country on Earth? Of course, particularly not in the case of particularly nuclear-armed powers like China. But the image of an American president actually acting as an apologist for a totalitarian regime is appalling.

By his own words, Biden practically admitted that any criticism he directs toward Beijing about the genocide of Uighurs, the repression of Hong Kong and China’s increasingly aggressive stance toward Taiwan are meant pretty much for domestic consumption.

“No American president can be sustained as a president if he doesn’t reflect the values of the United States,” Biden said, outright acknowledging it would be political pressure, rather than his own convictions, that would be motivating any condemnation of Chinese human rights atrocities.

There’s no doubt Biden’s words brought smiles to the faces of the rulers in Beijing. And they brought outrage at home.

Joe Biden on China’s human rights violations and genocide against the Uighurs: “culturally there are different norms”

To be clear, the Biden administration is going to “speak out” against Chinese Communist Party human rights violations, but admit at the same time that different cultures have different norms—so basically it’s purely for domestic consumption and China knows it’s a ruse https://t.co/9bmryJyR61

Anderson Cooper just stood there and watched him do it. https://t.co/pLFqFpaUDM

Probably sensing how disastrous Biden’s answer was, Cooper spoon-fed the president a follow-up question, asking if there would be unspecified “repercussions” for China.

“Well, there will be repercussions for China, and [Xi] knows that,” he said. “What I’m doing is making clear that we, in fact, are going to continue to reassert our role as spokespersons for human rights at the U.N. and other — other agencies that have an impact on their attitude.

“China is trying very hard to become the world leader and to get that moniker.  And to be able to do that, they have to gain the confidence of other countries.  And as long as they’re engaged in activity that is contrary to basic human rights, it’s going to be hard for them to do that.

“But it’s much more complicated than that.  I’m — I shouldn’t have tried to talk China policy in 10 minutes on television here.”

Actually, it’s not “much more complicated” than this:

The president of the United States just told the country and the world that he regards China’s behavior as a symptom of different “norms” that different countries have, even if his own State Department calls it “genocide”;

That any criticism he directs toward China should be seen as driven by political considerations only;

And that any “repercussions” China faces will almost certainly be geopolitical theater.

The contrast with former President Donald Trump’s four years of confrontation with China — even outside its role in the coronavirus pandemic — couldn’t be more evident, on everything from the trade to industrial espionage to human rights abuses.

Biden clearly has no more desire to confront China as president of the United States than he would as an owner of the average NBA team.

In one way at least, Biden actually did his country a favor by trying to “talk China policy in 10 minutes on television.”

He showed America what the new “norm” is. Unfortunately, the rest of the world was watching, too.