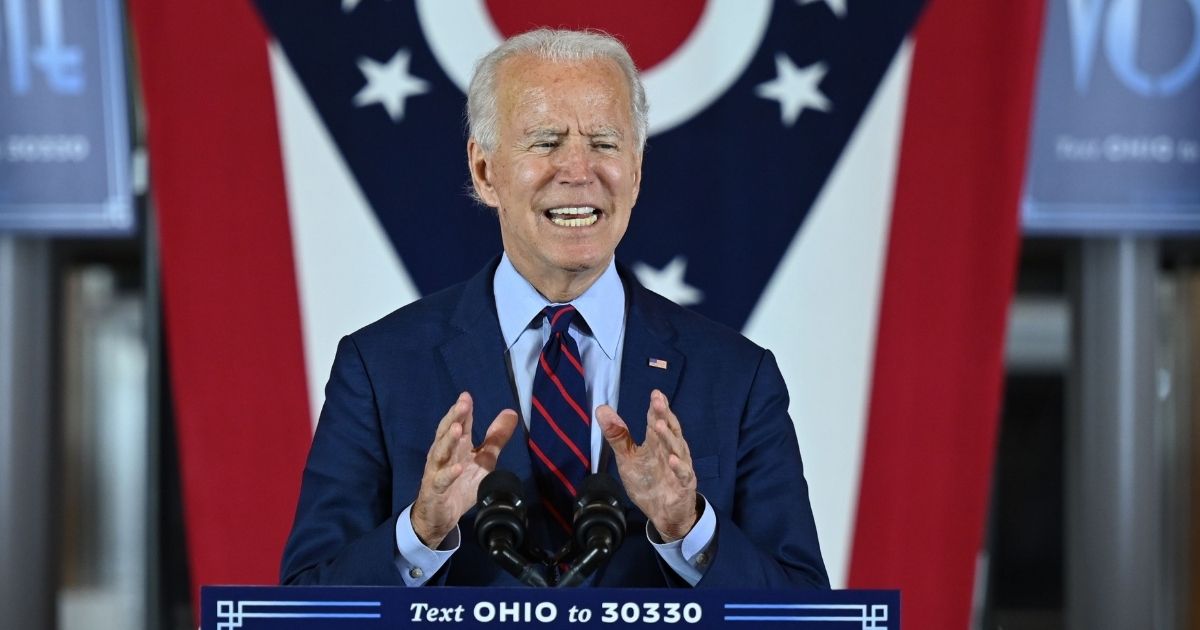 Joe Biden may have forgotten a lot, but when it comes to lying to the American people, he remembers how to do it just fine.

During an interview Monday in Ohio, the Democratic presidential nominee was asked — yet again — where he stands on proposals by radical members of his own party to destroy the independence of the judicial branch of government by “packing” the Supreme Court in the event he wins the November election.

Biden’s response was the latest lie from the Democratic Party — that President Donald Trump is “packing” the court already, merely by fulfilling his responsibilities under the United States Constitution.

“Look what I want them to focus on, as I’ve respectfully suggested, court packing is going on now,” Biden told WKRC-TV in Cincinnati.

The reference, of course, was to the nomination of Seventh Circuit Judge Amy Coney Barrett to the Supreme Court to replace the late Justice Ruth Bader Ginsburg. If Barrett is confirmed, it would solidify a conservative majority on the court, with three of the justices appointed by Trump.

TRENDING: Biden Doesn’t Know Where He Is: Addresses ‘People of Arizona’ When He’s Actually in Nevada

Democrats have responded to that prospect by threatening, if they gain power in the November election, to expand the size of the Supreme Court enabling a Democratic President Biden to appoint more justices amenable to the “progressive” agenda.

It’s a proposal so radical not even Franklin Delano Roosevelt could get it passed in 1937 with firm Democratic control of both houses of Congress. In his Senate days, Biden opposed it vocally, but has this year been unwilling — or too cowardly — to condemn it, telling voters he would not reveal his position until after the election.

Obviously, that’s not an answer a self-governing, freedom-loving people can accept, so Biden is working a new dodge — trying to divert attention from the question by lying about what’s happening with the court now.

Do you think Joe Biden is mentally capable of being the president?

“I’ve already spoken on it. I’m not a fan of court packing. I don’t want to get off on that whole issue,” Biden told WKR’s Kyle Inskeep. “I want to keep focused. The president would love nothing better than to fight about whether or not I would, in fact, pack the court or not pack the court, etc.

“The focus is, why is he doing what he’s doing now. Why now? With less than 24 days to go in the election?

“And the hearing’s going to take place, and there’s only going to be 10 days or whatever it is before the vote takes place. That’s the court packing the public should be focused on.”

That would be an acceptable answer – if it were remotely true.

First of all, in much of the mainstream media — and even some conservative news sites — Biden’s statement that he’s “not a fan of court packing” is being played as some sort of hint that he opposes expanding the court to suit progressive political needs.

At best, that’s an overly optimistic read. At worst, it’s either hopelessly naive or outright deception.

As Jordan Davidson put it at The Federalist on Tuesday:

“Despite Biden’s rhetorical spin, the term court packing does not refer to the president’s or the Senate’s constitutional duty to appoint and confirm justices to fill existing vacancies in the judiciary. It refers to the act of adding additional justices, beyond the existing nine …

“While Biden actively evades answering directly whether he has any intentions to add more justices any time he is asked, the media refuses to hold him accountable and have instead run with his false accusations that Republicans are packing the Court by simply moving forward with Barrett’s confirmation process to fill an existing empty seat.”

Biden was simply using the Democrats’ typical deception of trying to change the meaning of words when the argument is not in their favor. When logic isn’t working, they appeal to emotion — a tactic that’s only necessary when your argument is wrong.

What Trump is doing is not “court packing.” As the duly elected president, with a duly elected Senate made up of members of his own party, Trump is filling a Supreme Court vacancy as the Constitution mandates.

What Biden, Harris and Democrats are doing is trying to change the terms of the debate because they know Americans don’t support their actual goals of remaking the United States into a larger version of the countries where socialism has been tried before — at horrendous cost to human life and the liberties that are the birthright of American citizens.

No, there’s nothing in the Constitution that says the Supreme Court has to have nine judges, but it’s a number that has stood the country in good stead for 150 years now, there’s no reason to change it.

If Joe Biden were the straight-talking, lunch-bucket Joe from Scranton his campaign pretends he is, he would have no problem saying that out loud.

But he’s not. So he resorts to word games and duplicity to try to avoid a question he claims Americans don’t “deserve” to know the answer to.

In one sense, the Monday performance might have been reassuring to Biden backers.

As he’s recently demonstrated, their presidential candidate is sometimes unaware of what state he’s actually in.

And he’s been unable to name his 2012 Republican opponent, Mitt Romney, who’s not only one of the more prominent names in American politics, but was one of the Republicans libs were counting on to stop Trump’s Supreme Court nomination. (“The senator who was a Mormon,” Biden called Romney, which is more or less true. Romeny’s a Mormon, though he wasn’t a senator during the 2012 campaign.)

Those are all the kind of things Americans should expect their president to remember, but Biden has forgotten them all, in public. (It’s even more worrisome to think of what he’s slipping on when the cameras are off.)

But that interview Monday made one thing clear: Joe Biden hasn’t forgotten how to lie to the American people.

The only way to keep that from being important for the next four years is to make sure Donald Trump stays in the White House.