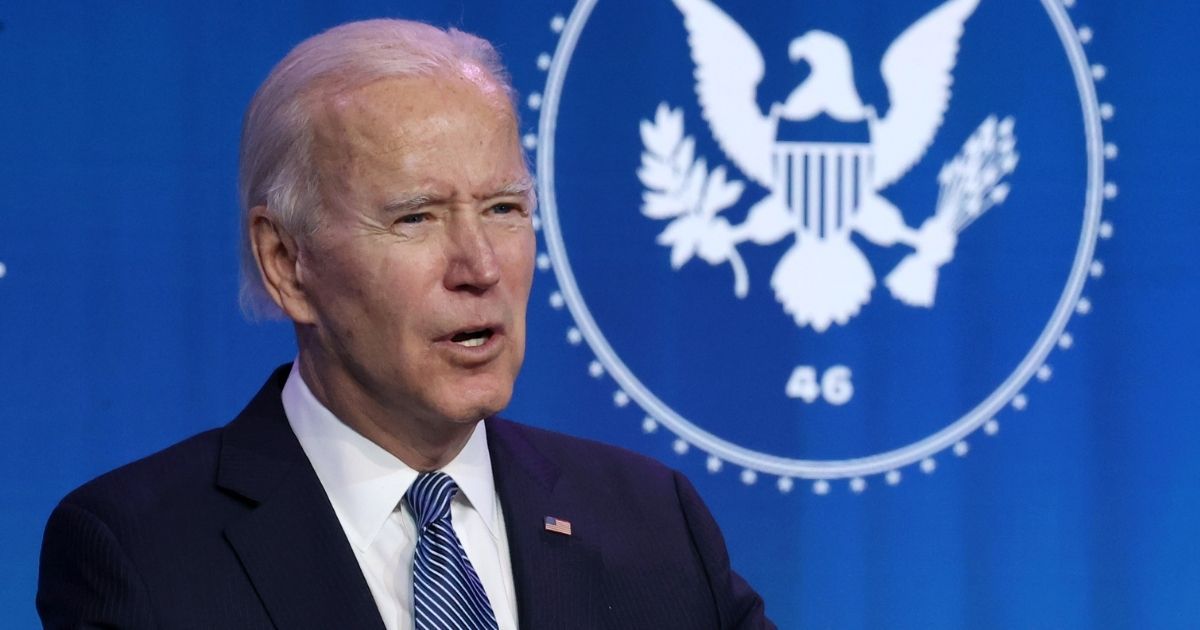 President-elect Joe Biden on Thursday said that race was a factor in the failure of Capitol Police to contain the mob that surged into the Capitol Wednesday to embark on a spree of violence.

“Our president is not above the law. Justice serves the people. It doesn’t protect the powerful. Justice is blind,” Biden said during a media event to announce his nomination of Merrick Garland to serve as attorney general.

“What we saw yesterday, in plain view was another violation of a fundamental tenet of this nation. Not only do we see the failure to protect one of the three branches of our government. We also saw a clear failure to carry out equal justice.”

“No one can tell me that if it had been a group of Black Lives Matter protesting yesterday, they wouldn’t have been treated very, very differently than the mob of thugs that stormed the Capitol,” he continued. “We all know that’s true, and it is unacceptable. Totally unacceptable. The American people saw it in plain view. And I hope it’s sensitized them to what we have to do. Not many people know it.”

TRENDING: As Democrats Secure Total Control of US Government, China Makes Its Move

Vice President-elect Kamala Harris seconded Biden’s comments that there was a double standard.

“We witnessed two systems of justice when we saw one that let extremists storm the United States Capitol and another that released tear gas on peaceful protesters last summer,” she said, according to The Hill. “The American people have expressed, rightly, outrage. We know this is unacceptable.”

“The Capitol police were unprepared, ineffective and some were complicit. All of them should be held to account,” said Democratic Rep. Marcia Fudge of Ohio, who has been nominated to become secretary of Housing and Urban Development, according to USA Today.

Black Lives Matter Global Network joined Biden in saying the ineffective police response to the rioting was tinged with racism.

“When black people protest for our lives, we are all too often met by National Guard troops or police equipped with assault rifles, shields, tear gas and battle helmets,” the group said in a statement. “When white people attempt a coup, they are met by an underwhelming number of law enforcement personnel who act powerless to intervene, going so far as to pose for selfies with terrorists, and prevent an escalation of anarchy and violence like we witnessed today.”

“Make no mistake, if the protesters were Black, we would have been tear-gassed, battered, and perhaps shot,” the group wrote.

Many on Twitter found Biden’s comments divisive from a president who pledged unity.

So much for “unity and healing”….just pushing the divide further and further.

Further, those who were at the epicenter of Black Lives Matter riots over the summer had noted that police did not intervene then.

“I think a more aggressive stance would have been able to forcibly stop them. You know, arrest them, take them into custody. You know, to stop this [from] happen[ing], that should have been done, I believe the first night,” businessman Jim Degrazio of Kenosha, Wisconsin, said in September, according to the Badger Herald.

“The past four years, we’ve had a president who’s made his contempt for our democracy, our Constitution, the rule of law clear in everything he has done. He unleashed an all-out assault on our institutions of our democracy from the outset. And yesterday was but the culmination of that unrelenting attack.”