Home Daily News Biden Claims ‘America Is Back’ Then Pompeo Shreds Him with Just 1... 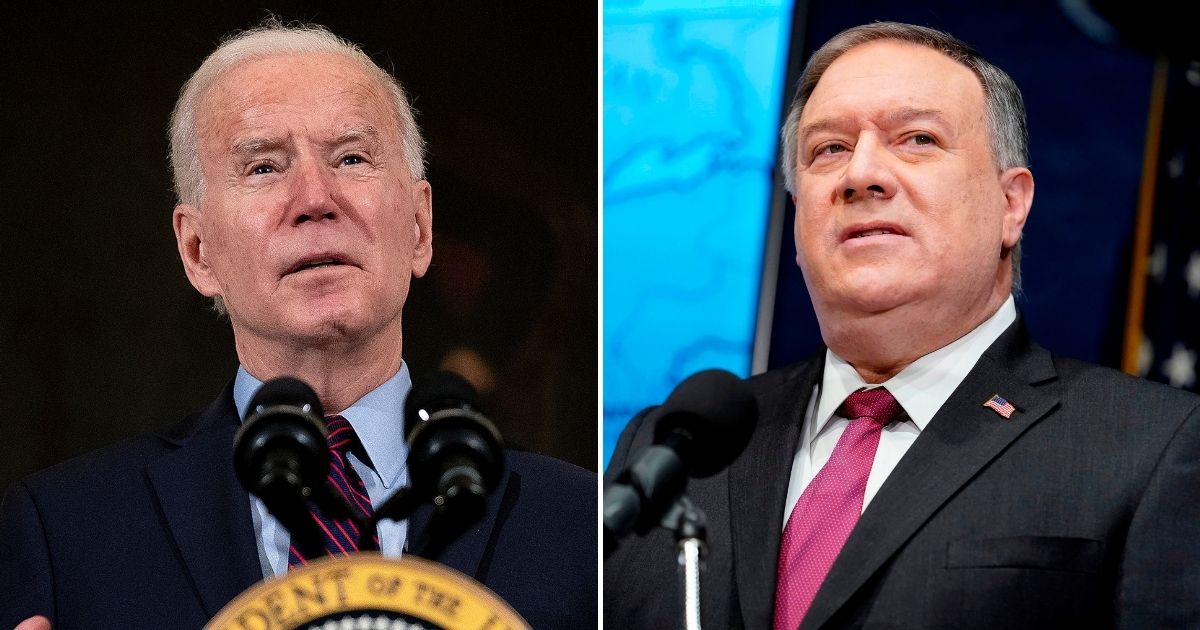 Former Secretary of State Mike Pompeo shredded President Joe Biden on Fox News on Thursday in response to Biden’s claim earlier that day that “America is back.”

Biden, delivering remarks at the U.S. State Department on Thursday during his first foreign policy address, portrayed the country as having faltered somehow during the four years of President Donald Trump’s leadership. Biden, in an (at-times) cringeworthy address filled with verbal miscues and his trademark problems with basic syntax, droned on for what felt like an eternity.

One line, however, stood out among others.

“And so — so is the message I want the world to hear today: America is back. America is back. Diplomacy is back at the center of our foreign policy,” Biden said in his address, alongside current Secretary of State Antony Blinken.

Appearing on Fox News with former Republican congressman and new “Primetime” host Trey Gowdy, Pompeo — who held Blinken’s post from April of 2018 until Biden’s inauguration in January — hit the new president with a memorable one-liner that makes you wonder if Pompeo himself might not be planning a quiet retirement while Democrats eat at the Trump administration’s legacy like termites under a discarded railroad tie.

“Does he mean back to when ISIS controlled a caliphate in Syria that was the size of Britain? I hope not,” Pompeo said.

Ouch! Pompeo was out for blood. He remained diplomatic, though, which is what you’d expect from the country’s previous chief diplomat.

“President Trump and our team took that down,” Pompeo said of the now-former Islamic State caliphate.

Would you vote for Pompeo if he were to run for office?

The former head of the State Department continued hitting Biden over his posturing teleprompter speech. He nailed the Democrat over the mess left behind by the Obama administration, which Pompeo and Trump put a lot of effort into cleaning up.

“When he says ‘back,’ when America is back, does he mean back to letting China walk all over us, destroying millions of jobs in places like Kansas and South Carolina, that we know so well?” Pompeo said. “I hope that’s not what he means by back.

“[Biden] talked about allies. When he said go back, does he mean back to dissing allies and friends like Israel and treating the terrorists in Iran like friends by giving them $150 billion in pallets of cash?

“I don’t think the American people can afford to go back to eight more years of Barack Obama’s foreign policy. I hope they’ll move forward with a foreign policy look much more like our America first foreign policy,” Pompeo said.

It’s worth noting, if you watched Pompeo’s Twitter feed during his final week at the State Department, that he was uncharacteristically active.

RELATED: Austin: Multiculturalism Could Destroy America — It Is Cultural Pluralism That Makes Us Great

The Kansas native used his time online in the waning hours of the Trump administration to step away from his usual modest style and share some thoughts which were more personal in nature.

These acts are an affront to the Chinese people and to civilized nations everywhere. The People’s Republic of China and the CCP must be held to account.

We moved past foreign policy elites peddling the same old failed ideas, on the left and the right. Not popular in the Swamp but it produced great results, like the #AbrahamAccords. pic.twitter.com/868iv0URRI

Today is my 1000th day as America’s 70th Secretary of State. Each one has been a privilege to serve the American people. So many kind words from all across our nation – thank you all for your support and kindness. The Lord is watching over America and always will be. pic.twitter.com/H7PSgcLcpE

Pompeo hasn’t given the slightest indication he intends to ever pursue an elected office. But he proved to be a true champion for Americans, and for “America First” ideals, during his time with the Trump administration.

Is there anyone more qualified to potentially carry the torch someday?

At 57-years-young, Pompeo has a lot left in the tank. Could we see his name on a ballot somewhere? He hasn’t said, but just maybe he’s testing the waters.

The country could certainly use a patriot like Pompeo in any capacity he’d be willing to serve.