Home Daily News Austin: What Could Have Stopped the Police Shooting of Daunte Wright? 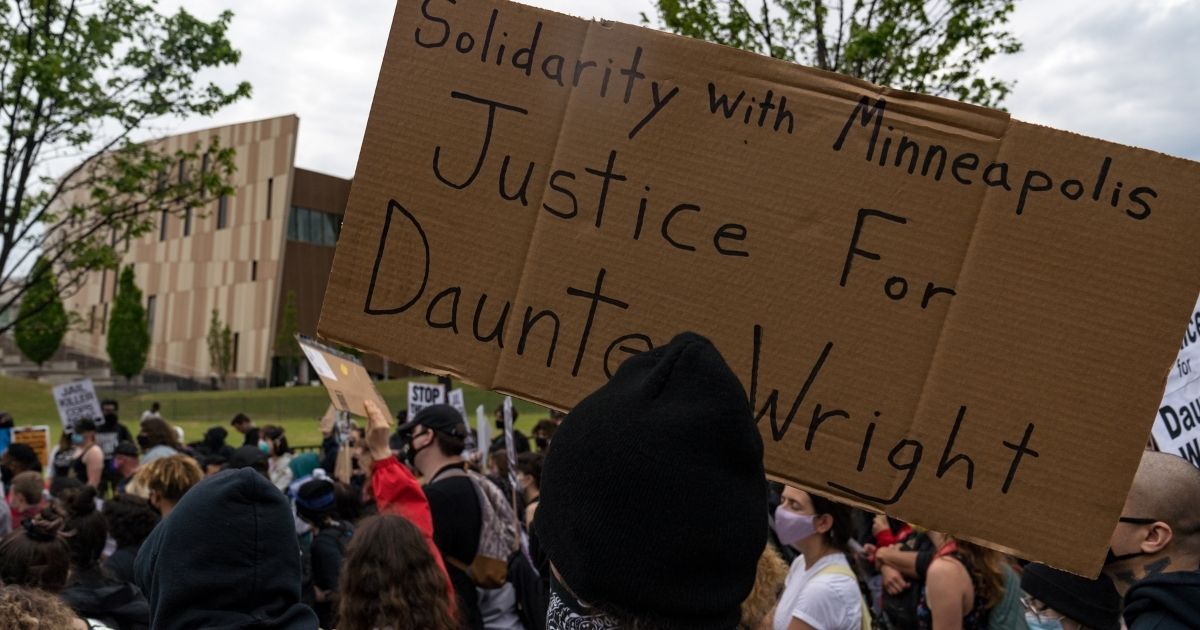 When it comes to tragedies, the progressive left is more interested in finger pointing than in finding realistic solutions.

When it comes to police shootings, this is particularly the case, with leftists claiming police are inherently racist and that until American society undergoes a radical restructuring, nothing will change.

Typically, what follows is a reactionary response from some on the right, with many placing the full weight of the responsibility on the shooting victims’ shoulders.

Ascribing motive and pointing fingers becomes the priority, when instead, we all should be focused on finding substantive preventative measures to reduce the odds of such tragedies happening again.

This certainly has been the case with the police shooting of Daunte Wright.

TRENDING: Dr. Fauci Admits, Under Oath, Biden Admin Is Pushing CDC Guidance on Americans, But Not on Illegal Immigrants

On Sunday afternoon, Wright — a 20-year-old black man — was pulled over on a traffic stop in Brooklyn Center, Minnesota. Officers on the scene then discovered he was wanted on an active warrant for a “gross misdemeanor weapons charge,” according to Lead Stories.

When officers found out about the warrant, they said they tried to arrest him, but Wright broke away, got back into his car and tried to drive away, according to the New York Post. Veteran officer Kimberly Potter allegedly then fired one fatal shot at Wright, saying she thought she was holding her Taser instead of a gun.

The killing sparked protests. Potter and Police Chief Tim Gannon resigned from the force on Tuesday, and Potter, 48, was charged Wednesday with second-degree manslaughter.

So how could the killing have been prevented?

Some reasonably have suggested more training for officers such as Potter might have helped.

This, however, would require drastic increases in police funding.

Due to the Black Lives Matter movement, departments across the country that are in need of more resources to better train their officers are instead being radically defunded.

It’s also possible more training would not have affected the outcome in this case.

Potter made a mistake, as all human beings do. That mistake carried drastic consequences with it. Police have millions of interactions with the public every year, and accidents are inevitable, unfortunately.

The odds of such an accident happening with police, however, increase dramatically during high-stress situations, which officers  often are faced with.

So what can be done to lessen the odds of having a high-stress situation with police, such as the one Wright experienced?

In basic terms, suspects need to comply with officers’ demands. If Wright had followed police commands, he likely would be alive today.

I can imagine what many emotional responses to this statement might be — “You’re blaming the victim,” “Police should never make mistakes,” “This should never happen.”

But this isn’t “blaming the victim.”

More often than not, when that phrase is invoked, it is being grossly misused.

For example, advising women not to walk around in public half-clothed at 2 a.m. isn’t “blaming” potential rape victims, it is simply acknowledging the reality of the situation — we live in a fallen world, and evil crosses through the heart of every person.

Therefore, we all should apply the requisite wisdom to interact with the rest of the world in a way that protects us against the brokenness of reality.

If potential rapists are drawn to attractive, scantily clad women, then being out in the middle of night — without any witnesses around — might not be the wisest course of action.

By the same token, if policing is a broken system, as many leftists claim, it would behoove all men and women interacting with police to make each interaction as painless and stress-free as possible.

As it turns out, many prominent cases in the past year likely could have been avoided if the suspects had complied with police orders.

Does the progressive left really care about finding solutions to these problems?

This isn’t to say the suspects got what was coming to them, or that they deserved to die — it’s acknowledging the reality of the situation.

Wright allegedly resisted arrest and was attempting to flee officers when he was shot.

In Kenosha, Wisconsin, in August, Jacob Blake — a 29-year-old black man — was confronted by police after being named in a domestic complaint and resisted arrest, according to a Wisconsin Department of Justice statement.

After a Taser failed to stop him, Blake reached into his vehicle, where a knife later was found, and was shot seven times in the back, per the statement.

The shooting left Blake partially paralyzed, according to The New York Times. No officers were charged in the case.

Even the killing of George Floyd in Minneapolis in May was precipitated by what police said were several minutes of Floyd — who an autopsy showed had fentanyl and methamphetamine in his system at the time, NPR reported — struggling with officers and resisting arrest.

Wright, Blake and Floyd have become part of tragic statistics.

The rate of fatal police shootings between 2015 and March 2021 was 35 per million of the black population in the United States, while the rate was 14 per million for whites, according to the research website Statista.

Meanwhile, black Americans appear much more likely to be charged with resisting arrest when compared to other groups, according to multiple reports.

This puts black men in more danger of police action.

Wright, Floyd and Blake had been charged with violent crimes before their shootings. The cases against Blake and Wright were pending; Floyd pleaded guilty to aggravated robbery with a deadly weapon in connection with a 2007 case and was sentenced to five years in prison.

So, even in cases where the police are fully at fault — the suspect has done nothing wrong and didn’t resist arrest — the odds of any of those cases happening in the black community would be reduced if the prevalence of violent crime within the community was reduced.

There was a time when even The New York Times acknowledged this to be the case.

In a 2015 article titled “Police Killings of Blacks: Here Is What the Data Say,” then-Harvard economist Sendhil Mullainathan examined why black Americans were being shot by police at a disproportionate rate.

While conceding that racial bias in policing might very well exist, Mullainathan found that “What the data does suggest is that eliminating the biases of all police officers would do little to materially reduce the total number of African-American killings.”

“The data is unequivocal. Police killings are a race problem: African-Americans are being killed disproportionately and by a wide margin. And police bias may be responsible. But this data does not prove that biased police officers are more likely to shoot blacks in any given encounter,” The Times article reads.

“Instead, there is another possibility: It is simply that — for reasons that may well include police bias — African-Americans have a very large number of encounters with police officers.”

Those “encounters” are driven by “crime data and community demands for help,” according to Heather Mac Donald of the Manhattan Institute.

“Policing today is driven by crime data and community demands for help. Victim reports send police disproportionately to minority communities because that is where people are most being hurt by violent street crime,” Mac Donald wrote in City Journal, a public policy magazine.

“Blacks between the ages of ten and 43 die of homicide at thirteen times the rate of whites, according to the CDC. In New York City, blacks make up 73 percent of all shooting victims, though they are 23 percent of the city’s population. In Chicago in 2016, there were 4,300 shooting victims, almost all black.”

In summary, due to higher levels of crime, black communities need more police presence. Due to those increases in presence, every member of those communities has a larger number of encounters with police when compared to individuals in other communities. And as the number of police encounters increases, so do the odds of a negative encounter occurring, especially if suspects are more prone to escalate tensions by resisting arrest.

None of this means that officers involved in unjustified shootings should skirt facing justice for their actions.

But again, if the goal is to reduce the odds of these tragedies  occurring, we need to try to look at the facts dispassionately.

And a dispassionate analysis reveals one simple truth: Until violent crime decreases within the black community, there will be a disproportionate number of African-Americans shot by police.