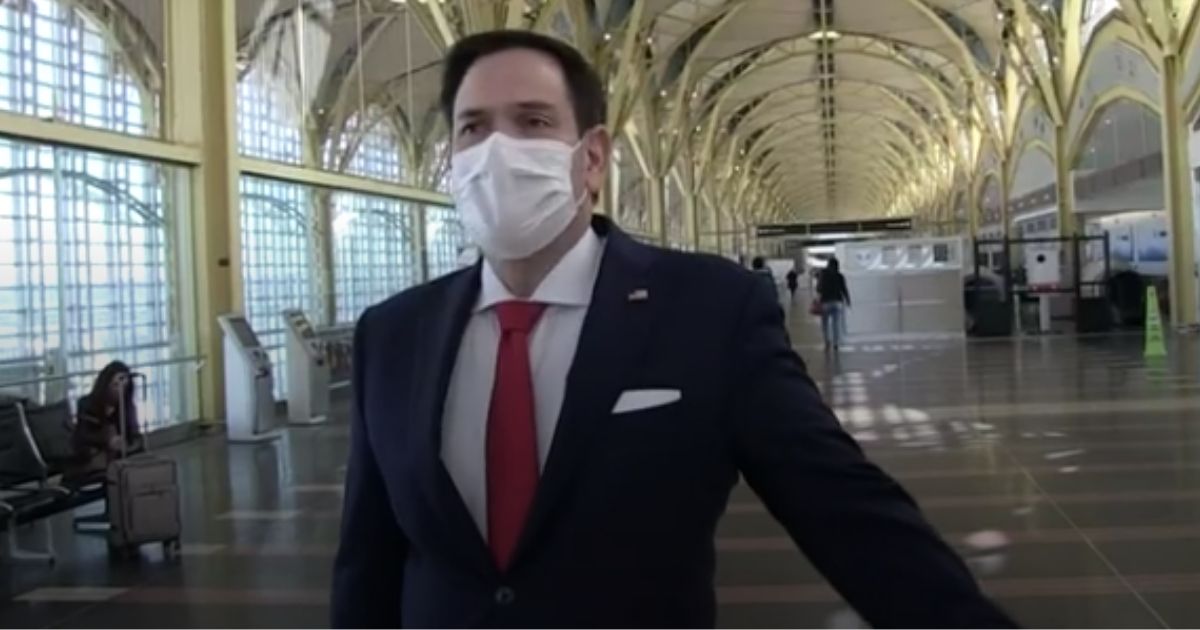 Do you believe in UFOs?

Needless to say, Sen. Marco Rubio, a member of the Senate Intelligence Committee, has been privy to classified information and he is extremely concerned. Either the technology of a rival nation or group has advanced at a frightening pace without our knowledge or we have visitors from beyond our solar system.

TMZ caught up with the Florida Republican on Monday at Reagan National Airport in Washington to discuss the situation.

And the unsettling truth is, Rubio said, the United States government doesn’t know.

The TMZ reporter noted that many people consider China to be a big threat, but he wondered if we shouldn’t also “be worried about what else that’s out in the universe.”

“I would take it one step at a time. You know what I mean. I’m not saying that’s what it’s all about. Like I told you, I don’t know the answer to what it is. But it’s stuff that’s there,” Rubio said.

Do you believe in UFOs?

“So, you’re on the intel committee and they don’t tell you what’s going on?” TMZ asked.

“Well, I think they tell us what’s going on. I mean there’s stuff flying over the top of our military and they don’t know who’s flying it. They don’t even know what it is,” Rubio said. “So that’s a problem. We need to find out if we can.”

“So, everyone thinks we’re the smartest out there in the universe. But are the aliens possibly smarter than we are?” TMZ asked.

“If they made it all the way here, they probably are, yeah. If they can get here and we can’t get there, that tells you they’re more advanced. But I don’t know if there are aliens. I don’t know if they’ve ever visited. When you talk about that stuff, everybody gets all stigmatized about it. No one wants to sound weird. My stuff is very simple. We don’t know what that stuff is that’s flying over the top of our installations. Let’s find out. Maybe it’s another country and that would be bad news, too.”

“Let’s just say, one more question … hypothetically …  should Biden … should we try to be friendly with these folks?” TMZ continued.

RELATED: China Bears Down on US Ally, Fleet of 200 Chinese Vessels Spotted in Formation

“Oh, I don’t know, man,” Rubio said. “We have so many problems going on as it is, that would be one heck of a way to top the last year and a half.”

Marco Rubio is far from the only government official to appear open to the possibility that aliens may exist.

In August 2020, several months after the Navy officially released video recordings of unexplained encounters pilots and sailors have experienced,  the Department of Defense issued an announcement that “Deputy Secretary of Defense David L. Norquist approved the establishment of an Unidentified Aerial Phenomena (UAP) Task Force” that willwill be led by the Navy.

In the video below, Ratcliffe tells her, “There have been a lot more sightings that haven’t been made public. Some of those have been declassified.

He continues: “When we talk about sightings, we’re talking about objects that have been seen by Navy or Air Force pilots or have been picked up by satellite imagery that frankly engage in actions that are difficult to explain. Movements that are hard to replicate, that we don’t have the technology for. Or traveling at speeds that exceed the sound barrier without a sonic boom. So, in short, things that we are observing that are difficult to explain. And so, there’s actually quite a few of those. So that information is being gathered and will be put out.

“When we see these things, Maria, we always look for a plausible explanation,” Ratcliffe notes. “Weather can cause disturbances, visual disturbances. Sometimes we wonder whether our adversaries have technology that are a little bit further down the road than we thought or that we realized. But there are instances where we don’t have good explanations for some of the things that we’ve seen and when that information is declassified, I’ll be able to talk a little bit more about that.”

Some readers may have seen the stunning videos officially released by the U.S. Navy in April 2020 of, well, unidentified flying objects. The Black Vault’s John Greenewald, Jr. explains that the Navy uses the term “UAP” as opposed to “UFO” because it is the “basic descriptor for the sightings/observations of unauthorized/unidentified aircraft/objects that have been observed entering/operating in the airspace of various military-controlled training ranges.”

The videos had been previously publicized by The New York Times and The Black Vault in 2017 and 2018. By April 2020, the videos were “officially” approved for release.

One video was recorded off the coast of San Diego in November 2004. The “FLIR1” became known as the “Tic-Tac UFO Incident” and a film titled the “Nimitz Encounters” was made about it, according to Greenewald:

And two others were recorded off the coast of Virginia by Navy pilots on a training mission in January 2015:

Last week, Popular Mechanics reported that, over a period of four nights in July 2019, a small group of U.S. Navy destroyers out on maneuvers off the coast of San Diego, coincidentally in the same area where UAPs had been seen in 2004, claimed to have “encountered a mysterious fleet of drones. The Navy investigated the bizarre incident … but came away without a satisfactory explanation.”

The drones were described by crew members as “Tic Tac shaped objects” which was the description provided by the Navy pilots who’d seen them in 2004. They “displayed an obvious interest in the destroyers.”

Observers claimed they “demonstrated capabilities far exceeding commercial drones, including flight time.” At one point, “a drone paced a destroyer as it sailed at 16 knots.”

In September 2019, Popular Mechanics reported, “observers spotted five to six drones in and around the Palo Verde nuclear power plant. And in January 2020, a wave of mystery drone sightings took place over Colorado, Nebraska, and Wyoming.”

The Navy has no explanation for this.