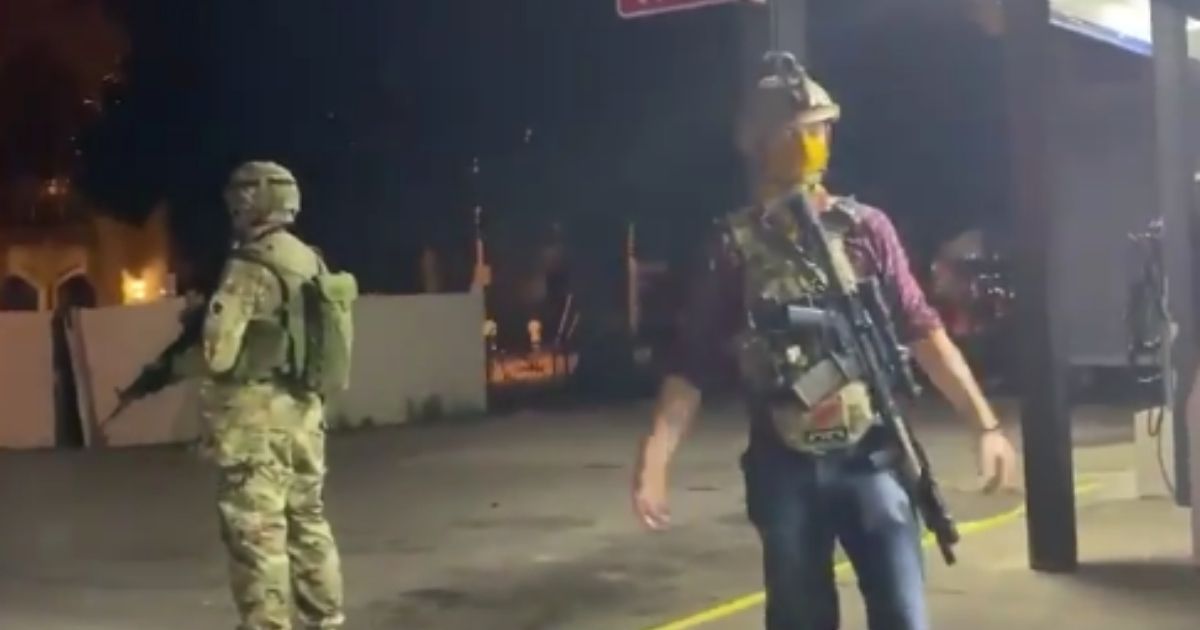 As looters and fires raged Monday night through downtown Kenosha, Wisconsin, some citizens grabbed their guns and tried to protect the community from destroying itself.

The city erupted in flames and rage Sunday after 29-year-old Jacob Blake, a black man, was shot multiple times by police. (Blake is in serious but stable condition, according to USA Today). Monday saw a repetition of the violence.

The armed men who appeared on the streets Monday appeared to sympathize with the anti-police protesters, but sought to limit the damage after Sunday’s rioting resulted in a ransacked car dealership and a damaged library.

“We’re trying to stop them from hurting their own community,” one man said.

TRENDING: Alyssa Milano Blasted by Rose McGowan: ‘What Have the Democrats Done To Solve Anything?’

Townhall reporter Julio Rosas said in a tweet that one of the armed men stopped rioters from attacking a car dealership.

The men disavowed membership in a militia, and simply asked to be called “armed citizens.”

WARNING: The videos below contain vulgar language that some viewers may find offensive:

This is the moment I mentioned earlier. These armed citizens said they support the protests but not the riots because people are hurting their own community.

Later on, as a car dealership was under attack by rioters, one of the armed men stepped in and stopped it. pic.twitter.com/uSqprPXkSW

In a separate video, protesters could be seen jeering at the armed citizens, one of whom replied.

“I’m on your side as long as you’re against the cops. But you can’t burn down your local businesses,” he told them.

A group of guys in #Kenosha armed with guns are protecting a local business from rioters:

As Kenosha became the center of national attention, some residents were amazed at what has happened to their city.

“This is our town,” 33-year-old Mike Mehlan, a chef, told The New York Times. “People have lost their damn minds.”

Do you think rioting is ever justified?

Not everyone was appalled.

“It’s unfortunate, but it has to be done,” added Wayne Gardner, who lives near the epicenter of the violence.

“This hurts,” told The Times. Although Body said the protests might have a cause behind them with which he agrees, he indicated violence is not the answer.

“But this is a neighborhood. They’re putting lives in danger,” he said.

One resident said the storm has been brewing for years.

“There’s been a growing disconnect here for years,” Nick Neumann, 36, told The Times. “There’s always been an underlying distrust for the police.”

BLM rioters in #Kenosha are carrying out a looting spree. #BlackLivesMatter pic.twitter.com/7O8tnHXaBn

Married couple Aldolfo and Julia Hernandez, meanwhile, said a 70-year-old friend who owned a mattress store that was looted and torched had been beaten by looters.

“Nobody come,” Aldolfo Hernandez told The Washington Post. “It’s ridiculous. This is America. This is a national emergency. Where are the firefighters?”