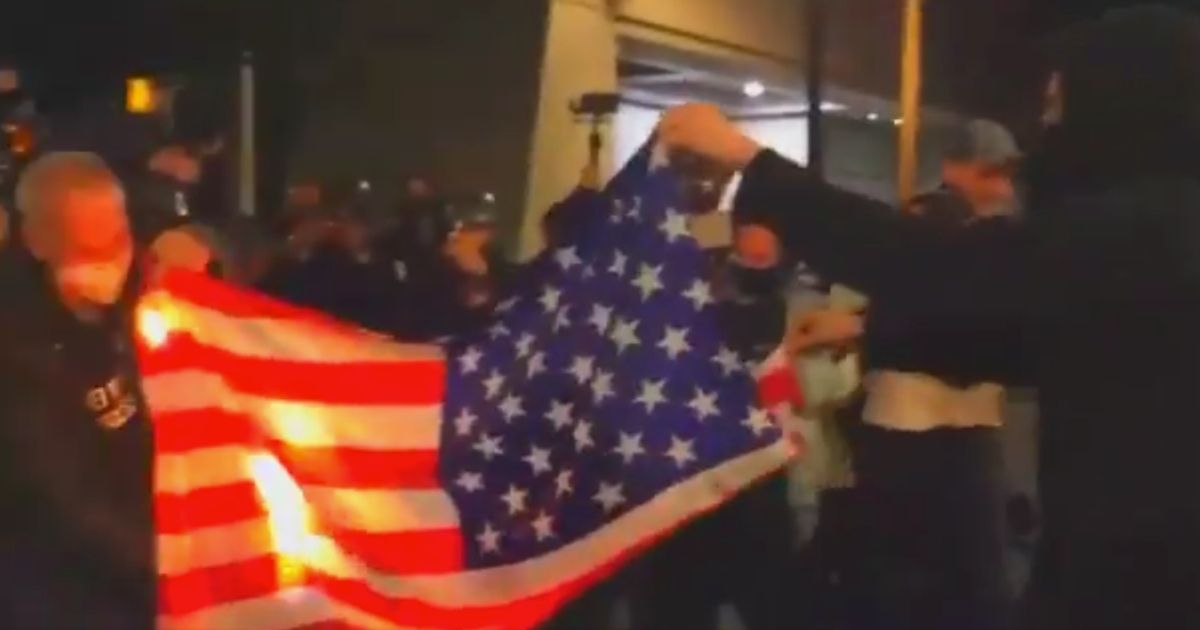 As Democratic state and local officials prepared for Saturday’s protests in Portland, Oregon, they focused on what might happen when the Proud Boys came to town.

But in the end, antifa turned the streets into flaming unrest as rioters burned flags and threw projectiles at police.

Chris Liedle, a spokesman for the Multnomah County Sheriff’s Office, noted after the Proud Boys rally that it had ended “without serious violence,” according to Oregon Live.

I was expecting bloody riots with the Proud Boys coming to Antifa’s Portland.
Nope, couple of small offenses.
Tell me again how the violent extremist far right, etc., managed to get this outcome. https://t.co/IBYEESWD0g

Then came the night.

“After largely peaceful protests throughout the day Saturday, several hundred protesters gathered in Downtown Portland around 8:30 p.m. in Lownsdale and Chapman Square Parks. As the crowd grew, many gathered in the street at SW 3rd Avenue and SW Main Street, blocking the street near the Justice Center,” according to a release posted by the Unified Command of Oregon State Police and the Multnomah County Sheriff’s Office.

“Warnings were provided via loudspeaker to vacate the roadway because it was open to vehicular traffic. Despite multiple warnings, much of the group remained in the street,” the release said.

“Officers moved in and made several arrests. While making arrests and ticketing illegally parked vehicles, projectiles were thrown at officers including full beverages cans, firecrackers and rocks. At one point, an officer was attempting to load an arrested person into a transport van when another arrested person, Michael Colten, forced his way out. He ran while still restrained in zip-ties for about two blocks before he was recaptured by officers,” the release said.

Should these antifa protesters be stopped cold?

Someone who was just detained ran out of a police van & took off sprinting with police running after them. #koin6news #PDX #PNW #PortlandProtest #protest #Oregon pic.twitter.com/s2VI606bHG

The release said that every time officers tried to disengage “individuals in the crowd threw projectiles at officers and re-entered the street. Officers made additional arrests.”

During the riots, police said they seized a drone from one vehicle.

As the night went on, rioters burned flags and scuffled with police.

RELATED: Oregon Governor Declares State of Emergency in Portland Only After Conservatives Plan To Rally

BLM-antifa rioters burn the US flag at their gathering in downtown Portland. #antifa #PortlandRiots pic.twitter.com/ZhzwjkdAZP

Later in the evening, “officers were targeted by high velocity objects, believed to be ball bearings launched from slingshots. These projectiles had the potential to cause serious injury,” the release said.

Police told the crowd at 11:45 p.m. that the riots had been labeled an unlawful assembly and that the crowd was to disperse.

“Few, if any, individuals followed the order, so officers began physically moving the crowd away. The officers were pelted with additional rocks and other dangerous objects. Officers continued making arrests,” the release said, noting that as late as 1:30 a.m. Sunday, rioters were still throwing objects at police.