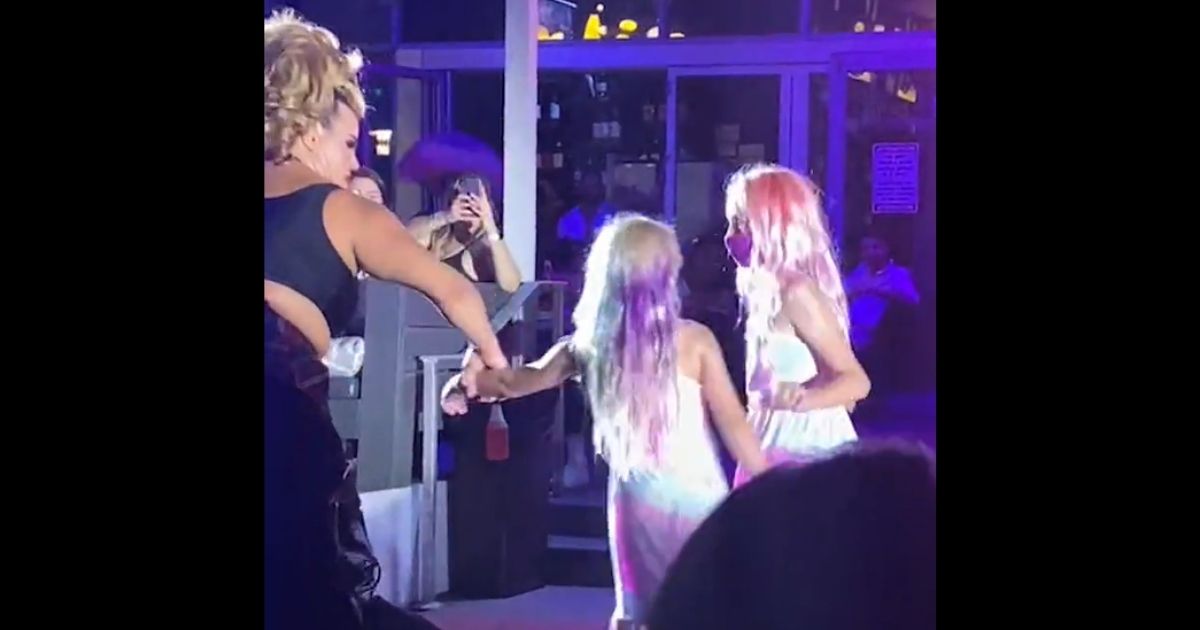 The left has insisted that its LGBT agenda is harmless and that conservatives who oppose it are hateful and evil. A disturbing new video exposes the truth about that agenda.

Former congressional candidate Angela Stanton-King posted a video to Instagram last week that showed children participating in a drag show. A man dressed up as a woman taught two young girls how to pose and strut for the crowd.

Stanton-King said in the video that it was in Los Angeles, but she corrected that in the post and in a follow-up video, identifying the location as Palace South Beach, an LGBT nightclub in Miami Beach, Florida.

The video begins with Stanton-King questioning in an expletive-laden monologue why it is that these children are taking part in a sexualized show.

Stanton-King then turned the camera toward the show, where the man in drag told two children, “Get your money, girls.”

Adults handed money to the children as they participated in the exploitative demonstration.

It is hard to overstate how disgusting this behavior is. Not only were these girls given confusing messages about gender at a young age, but they were also being sexualized. Meanwhile, the crowd cheered and participated.

(The video can be viewed by clicking here, though we warn readers that it is disturbing and includes language that some viewers will find offensive.)

Is the left sexualizing children?

“At one point, the drag queen took one of the children by the hand and directed them to stand on his left side,” TheBlaze reported. “He then showed both of the children how to pose correctly before they all continued down the walkway and turned to face the crowd.”

“He then told the children to stoop down and pick up the cash as the crowd continued to throw money at their feet.”

That’s right — adults went beyond handing bills to the children and began throwing money at them, which the man on stage encouraged.

“Got ’em picking up f***ing money off the floor like they’re f***ing strippers,” Stanton-King said with disgust.

The man in drag even joked that one of the girls had “made it” as a drag queen because a twisted adult gave her a twenty-dollar bill.

Stanton-King has been outspoken in her opposition to the left’s transgender agenda. She has a son who identifies as a woman, and they were on an episode of “Dr. Phil” on April 5.

According to Metro Weekly, Stanton-King said she was told that the episode would have the aim of resolving the relationship between her and her estranged son.

Instead, Dr. Phil brought on Ashlee Marie Preston, another man who identifies as a woman, to try and force her into accepting her son’s transition. Stanton-King posted a video to Twitter afterward criticizing the show’s approach.

“I’m the bad parent because they can’t force me to believe that my son is a woman,” she said before hurling expletives at the show. Her Twitter account has since been suspended.

While Stanton-King could stand to clean up her language and show a bit more empathy, her basic point is correct. Why is it that she is villainized for believing that her son is a man, and yet drag queens in Miami are cheered for sexualizing young girls?

The left wants you to believe that its insistence on allowing children to change their gender comes from love and compassion. It’s a lie.

As the video from Palace shows, LGBT advocates have no problem sexualizing children and trying to confuse them about gender. True love from a parent comes in the form of rejecting that behavior, not embracing it.