Home Daily News Alabama Weatherman Holds the Line and Stays on Air as His Wife... 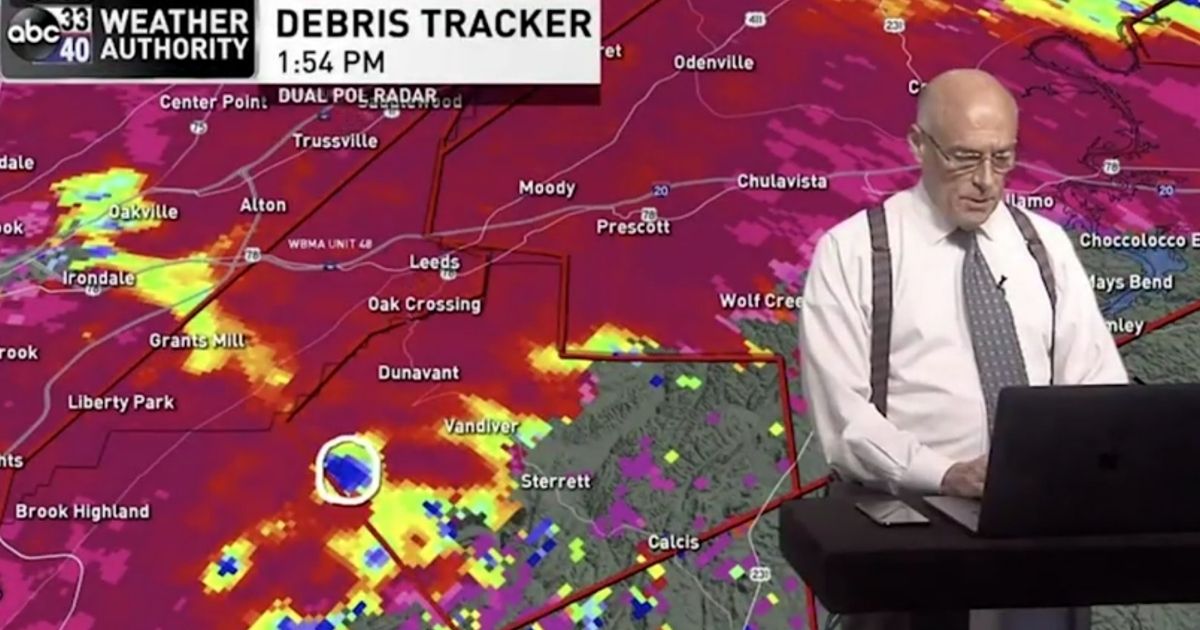 The job of any broadcaster is to remain professional at all times while on the air. One weatherman in Alabama took that task to heart as tornadoes ravaged the state and approached his own home on March 25.

Emmy-winning weatherman James Spann was reporting on the tornadoes that day for WBMA-LD, The Washington Post reported.

During the broadcast, Spann initially explained that he was checking to make sure his family was safe.

“What I’m doing is texting my wife to be sure she’s in the shelter,” he said.

After a few minutes passed, Spann took a longer break as his colleague took over the tornado coverage. After less than 15 minutes, Spann came back on air and explained the situation, The Post reported.

“The reason I had to step out — we’ve had major damage at my house,” he said. “I had to be sure — My wife is okay, but the tornado came right through there and it’s not good. It’s bad.”

The Hill reported that Spann was recently referred to as “Alabama’s most recognizable and influential TV weatherman” by a local news outlet, AL.com.

In addition, he has gained several followers through a show called WeatherBrains, which The Post noted was described as a “weekly show for weather nerds.”

After the tornadoes had died down, Spann sent out a tweet thanking those who reached out to check on him.

“As I often say, tornadoes happen to real people, at a real place, at a real time,” he added.

Had a scare today. As I often say, tornadoes happen to real people, at a real place, at a real time. pic.twitter.com/uoGxcKAJZE

Spann’s determination did not go unnoticed. Pat Cavlin, a fellow meteorologist in Florida, tweeted, “The composure he’s managed to maintain is unreal.”

Birmingham meteorologist James Spann returning on-air after checking in with his wife after reporting his house sustained significant damage.

The composure he’s managed to maintain is unreal.

In a time when Americans are increasingly skeptical of the establishment media, it is refreshing to see a broadcaster put viewers before himself.

Spann knew that it was his duty to inform the public about the impending danger, and after a brief check to make sure his wife was safe, he got right back to his job.

Did this meteorologist do the right thing while on air?

Even during the aftermath, Spann continued to advocate for others who sustained more substantial damage than he did.

Even though it was clearly not his primary intent, Spann’s coverage of the events only bolstered his reputation among viewers.

“Today will solidify James Spann’s reputation as the greatest broadcast meteorologist of all time,” a student named Andrew Justin told The Post.

The March 25 tornadoes in Alabama, unfortunately, took the lives of at least five people in Calhoun County, CNN reported.

Other families will face rebuilding efforts due to the storm damage on their properties.