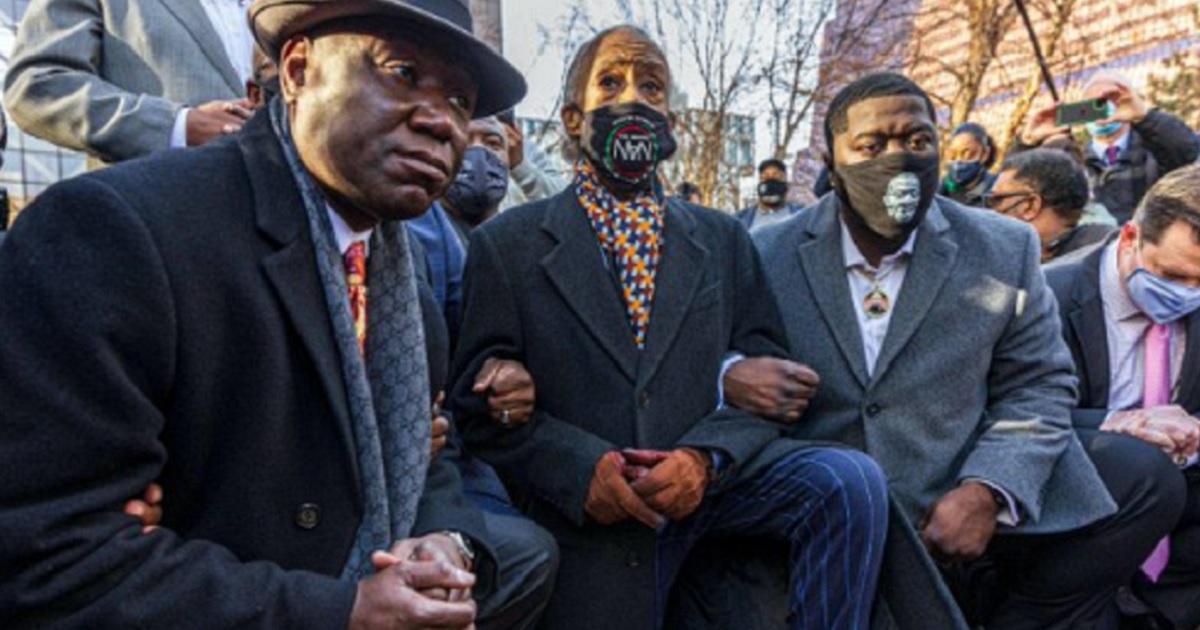 It’s a sure sign of trouble when the Rev. Al Sharpton shows up — and Monday in Minneapolis was no different.

The New York huckster, who has somehow turned civil rights “activism” into a lifelong grift, brought his traveling roadshow to the opening day of the trial of the former police officer accused in the death of counterfeit suspect George Floyd last year.

And he played the moment for all it was worth.

In the company of the Floyd family and their attorney, Benjamin Crump, Sharpton knelt on one knee outside the Minneapolis courthouse for eight minutes and 46 seconds, according to CNN.

That’s the length of time now-former Officer Derek Chauvin reportedly kept his knee on Floyd’s neck during the May 25 arrest that preceded his death.

Sharpton, the kind of guy who wants to be the ringleader at every circus, called out each minute as it passed.

“We are taking a knee for eight minutes and 46 seconds, and we want you to think of during that time, why Chauvin didn’t, in that time get his knee up?” Sharpton said at a news conference before the demonstration, CNN reported.

At a vigil Sunday night, Sharpton asked Americans all over the country to join in the theatrics, according to KMSP-TV in Minneapolis.

As anyone familiar with Sharpton’s history knows, none of this is a good sign.

Do you think Chauvin will get a fair trial in Minneapolis?

This is the charlatan who burst onto the national stage with the Tawana Brawley rape hoax of 1987 and hasn’t left since. With his gig at MSNBC, the man who was a frequent visitor to the Barack Obama White House is almost guaranteed to make an appearance whenever racial tensions are high and just need someone to throw gasoline on the fire.

Given the realities of liberals dominating social media, Sharpton’s production in Minneapolis was generally praised on Twitter, but there are still many who know the man for what he is.

Sharpton is always trying to make himself relevant !

Ben Crump is getting very rich litigating against city governments based in race. Al Sharpton has been a parasite for years.

Crump is the lawyer who won the $27 million settlement for Floyd’s family from the city of Minneapolis (a settlement that was announced as jury selection was beginning).

Sharpton and his ilk are parasites on the body politic, living off the pain of others while posing as champions of the downtrodden.

While the liberal media still take this con man seriously — he’s routinely, laughably, referred to as “civil rights leader Al Sharpton” by the journalists of The Associated Press and other mainstream outlets — Americans who remember a little more of history than, say, last summer, know that Sharpton’s presence at a scene of racial confrontation is almost inevitable, and it’s rarely for good.

Exploring Sharpton’s lengthy, loathsome history would be too much for our purposes (a 2017 piece from The Daily Beast is a nice start), but the pattern is clear.

From the Brawley hoax of the last century to the trial of George Zimmerman in the shooting death of Trayvon Martin in 2012 to the “hands up, don’t shoot” hoax surrounding the death of Michael Brown, the Ferguson, Missouri, man who was shot to death attacking a police officer in 2014, Sharpton has displayed an unerring instinct for inflammatory commentary that makes a bad situation worse — and has built a career benefiting by it.

The fact that the man is now considered a leftist eminence grise — a kingmaker of the Democratic Party — is a particular disgrace of modern liberalism. And it’s one the mainstream media and the progressive movement will never acknowledge.

History has proven over and over for more than 30 years that it’s a sure sign of trouble when Al Sharpton shows up. It’s a rock-solid bet that in Minneapolis, the country is going to see it proven again.