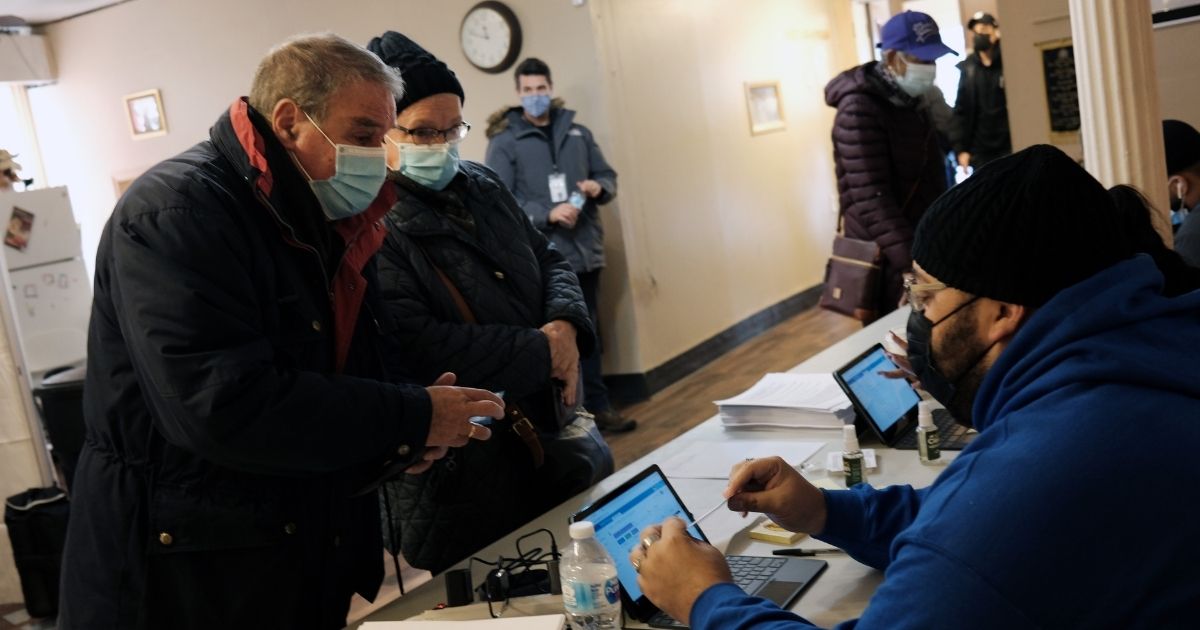 I remember the kids in my high school trying to look older in order to get into rated R movies or buy cigarettes. I would have hoped that kind of behavior would have ended by the time you hit 21 and you’re able to do pretty much everything legally.

However, in Florida, you can’t get the coronavirus vaccine legally below age 65 unless you’re a health care worker, in a care home or are deemed especially vulnerable, according to the AARP. So, like any high school sophomore trying to get in to see “Django Unchained” or buy a pack of smokes, two Florida women aged 34 and 44, allegedly dressed up as grannies and tried to skip the line for vaccines. They almost succeeded.

According to CNN, the two women were removed from the vaccination site by the sheriff’s department in Orange County, Florida, after showing up to receive their second jab by cosplaying as elderly women. The two were turned away when authorities realized the ruse.

The sad thing? They got away with it once.

“I don’t know how they escaped [detection] for the first time, but they came with the gloves, the glasses, the whole thing, and they are probably in their 20s,” Orange County health officer Dr. Raul Pino said.

Yes, according to WFLA-TV, the two women came in costume “complete with bonnets and gloves.” At a news conference Thursday, Dr. Dino said they had vaccine cards and all, and managed to get through on the first attempt.

Orange County Health Officer Dr. Raul Pino told us they’ve increased security at the @OCCC vaccination site over this and others who’ve tried different approaches to get the shot. He says the two girls had valid cards from their first shots, but got held up over their IDs. @WFTV

First off, consider shenanigans called on the fact these two managed to get through the first time — assuming they wore bonnets, gloves and granny glasses on that attempt, which isn’t known yet.

This isn’t an episode of “Mama’s Family” where Thelma Harper has to go to a funeral and ends up calling everyone there “dimwits” and “lamebrains.” This is real life, where no one, no matter how granny-ish, has worn these things in the better part of a half-century.

Should these women have been charged with a crime?

My mother is a granny in her mid-70s and she’s never worn a bonnet or gloves in the entirety of her time on earth — nor do I know any of her friends who would have donned that get-up. In fact, I don’t even remember my own grandmother ever donning those things, and she passed away almost 20 years ago. Want to call attention to yourself when you’re in line for the vaccine when all the other over-65s are wearing Buccaneers jerseys and flower-print dresses? Go dressed like a cartoon octogenarian from The New Yorker.

There were issues when they checked their ID cards — a fact only surprising in that it didn’t happen the first time around. While the names matched, the ages didn’t. Deputies were asked to escort the two women off the property at 10:20 a.m.

The women were given trespassing warnings and let go. Security around the site has since been ramped up.

RELATED: Dems Get Sneaky with COVID Bill, Include $100M for Subway System in Silicon Valley

To make this all the more distressing, Dr. Pino said that the number of people giving false identities to get COVID-19 shots is likely “higher than we expect,” according to CNN.

“This is the hottest commodity that is out there right now,” Pino said. “We have to be very careful with the funds and the resources that we are provided.”

WFTV’s Lauren Seabrook, meanwhile, had the same reaction I did:

IF SOMEONE KNOWS THESE TWO WOMEN, GET ME AN INTERVIEW WITH THEM. I NEED TO TELL THIS STORY. https://t.co/Qp7Anhh9KK

Alas, CNN reached out to them and they refused to comment. One Twitter user had a decent idea where you might locate someone in their younger age cohort, however:

You can probably find them on tiktok

Florida is the second-oldest state in the United States by population age, according to the Population Research Bureau (Maine, surprisingly, is number one), which is what makes this alleged ruse all the more heinous. The state desperately needs all the vaccines it can get right now, particularly in light of delays caused by the endless cycle of snowstorms this winter.

Unless these self-identifying “grannies” have some sort of underlying condition, there’s no reason for them to need a shot at this point. If they did, they could have gotten it straight off. They took one shot (and almost another one) from someone exponentially more likely to have serious complications or die from COVID-19. Most of this is bumbling, stupid and hilarious. One can’t help but feel a lot more needed to be done than just a trespassing warning.