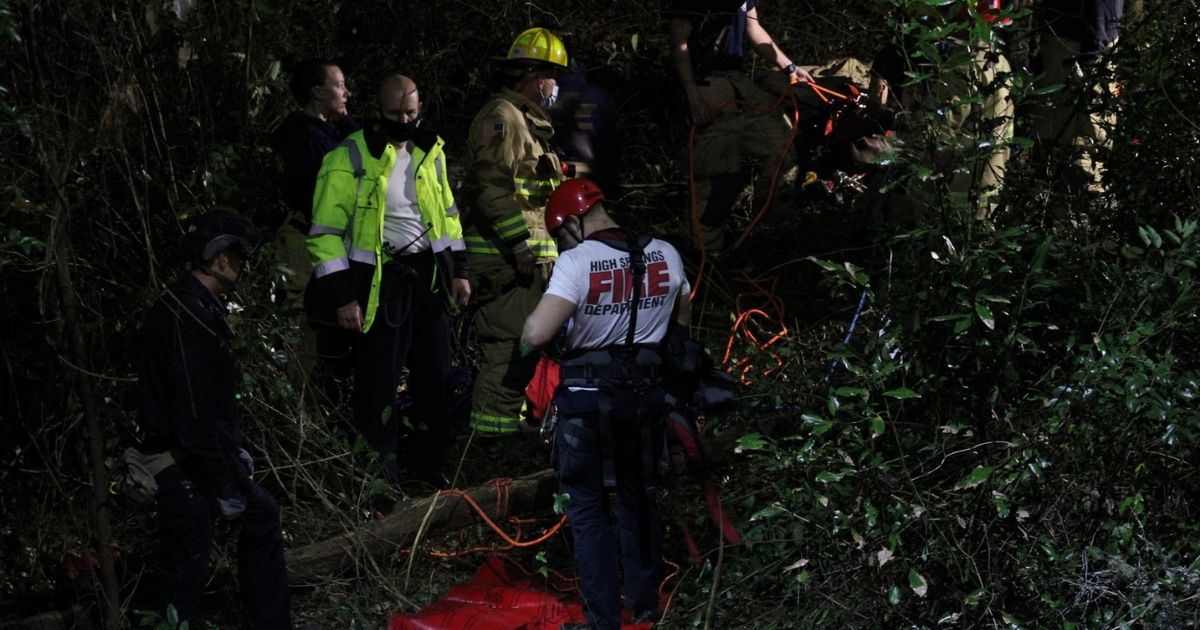 Many driving accidents happen when people are either unaware of the surrounding topography or fail to pay attention to where they are going.

Whether it’s in a car or on ATVs, some people can end up driving into ditches, mine shafts and sinkholes without realizing it.

According to the U.S. Geological Survey, “The most damage from sinkholes tends to occur in Florida, Texas, Alabama, Missouri, Kentucky, Tennessee, and Pennsylvania.”

Florida is notorious for the basins, and one of the most recent instances of a sinkhole accident occurred on Jan. 7 in High Springs, Florida.

It all began when a couple went out for a drive on private property the night before.

“It is reported that the female, and her male friend, were out last night around 8PM driving their car through the woods, roughly one quarter mile off of Poe Springs Road, when they drove into the sinkhole,” the High Springs Fire Department, who responded to the incident, posted on Facebook.

“Just after 5:30 this morning, High Springs Fire Department, High Springs Police Department and Alachua County Fire Rescue were called to the area of 24304 NW 182nd Avenue for a reported subject trapped in a sinkhole.”

“Upon arrival, firefighters found a female subject stuck roughly 40 feet below ground in a sinkhole filled with water.”

After they’d driven into the sinkhole, both driver and passenger managed to get out of their vehicle.

While the man was able to climb out of the hole and go for help, the woman was stuck in the sinkhole for almost half a day.

The location was not easy to get to, requiring special rescue gear and vehicles.

“After careful planning and preparation, HSFD Lt. Kevin Pearson, repelled into the 40 foot sinkhole, where he was able to make contact with the subject and secure her to her own harness and rope system,” the post continued. “She was removed from the hole around 7:21AM, with no serious injury after nearly 11 hours below ground.”

The post went on to say that a pair of ATV riders had fallen into the same sinkhole last September. The sinkhole was still on private property then, but an effort was made to make the sinkhole more obvious.

“Barriers were put in place after the incident in September to keep trespassers out,” the fire department said. “The barriers were moved or destroyed by trespassers. Several PRIVATE PROPERTY and NO TRESPASSING signs are posted all over the property.”

Thankfully, the two are doing well despite the incident, but hopefully they’ll think twice about trespassing on private property again.