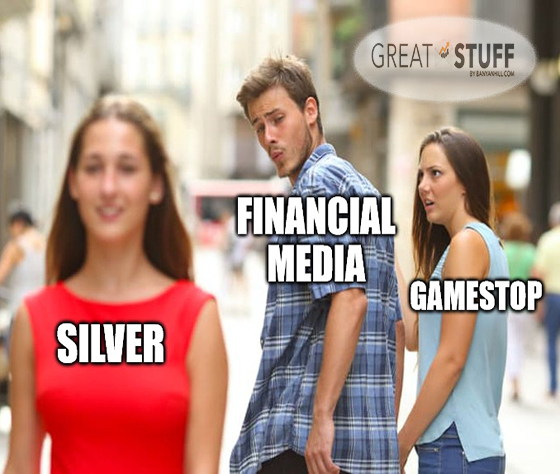 Saying everything is groovy when your tires are flat.

Silver prices soared today, with the lead futures contract spiking as much at 13% to $30 an ounce. The second-place metal hasn’t seen this much action since 2012.

What’s more, silver mining stocks like Pan American Silver (Nadsaq: PAAS), Hecla Mining (NYSE: HL) and Wheaton Precious Metals (NYSE: WPM) are going along for the ride. Hecla shares were up a whopping 30% just after the open this morning.

Now, before you jump on the silver bandwagon, let’s talk about why silver is surging to the moon. (Insert rocket emojis here.)

The major financial media publications would have you believe that Reddit’s infamous WallStreetBets message board (called a subreddit) is responsible.

Headlines such as “Silver surges as Reddit army targets precious metals” and “Silver jumps 11%, the most in 11 years as Reddit traders try their squeeze play with the metal” were everywhere today. Furthermore, #silversqueeze was trending on Twitter.

The idea is that there is not enough physical silver to back current market demand. Thus, “squeezing” silver prices will uncover the fact that most silver trading on the market is simply paper trading. The problem is that most hedge funds and institutional investors have been long silver for more than a year.  In other words, this supposed move by WallStreetBets doesn’t fit the collective’s typical M.O.

The subreddit is still decidedly focused on GameStop, not silver.

So, just who is driving the silver rally? That’s a good question.

All of this serves to weaken the GME short squeeze play and the silver squeeze — if that was ever really a thing.

I’m not saying you shouldn’t invest in silver. Precious metals have always been an excellent long-term investment, especially if you’re concerned about inflation.

What I am saying is that once an investing trend dominates financial media headlines, you’re probably already too late to the game. This is doubly true when it comes to silver, GameStop and any other Reddit-driven retail investor stock market trend.

Did you join the hordes of first-time retail investors this year? Bank some delicious tendies on GameStop or the massive returns we saw in the Great Stuff Picks portfolio? Well … it’s February, and you’re about to have a rather rude wake-up call: The taxman cometh!

Yes, it’s that time of year when Uncle Sam comes a calling, looking for his cut of your hard-earned cash. And if you had any major windfalls in 2020 from trading, he’s going to be looking your way very closely. It’s past time to get prepared, so you need to check this out:

It’s a proverbial “Tax Bible” on countless ways you could slash your taxes this year, next year and the year after that. But don’t wait too long, because tax season will be here before you know it. 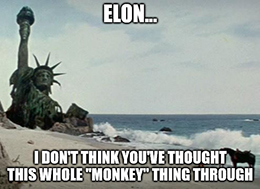 Are you ready for some Tesla (Nasdaq: TSLA) insanity? Alrighty then, let’s go!

First up, TSLA’s valuation craziness continued after Piper Sandler upgraded it from $515 to a Street-high $1,200.

According to Piper, “With Tesla’s target industries still embracing outdated business models, it may be decades before this company runs out of new opportunities to pursue.”

I’m not saying Piper is wrong, but General Motors would beg to differ on the “outdated business model” dig … as would pretty much every other major automaker in the world. Except maybe Ford, they’re still spinning their wheels on combustion engines.

Next up is a different level of insanity all together. Tesla CEO Elon Musk has hooked a monkey’s brain up to a computer to play Pong. I’m not kidding. “He’s a happy monkey,” said Musk. “We have the nicest monkey facilities in the world. We want them to play mind-Pong with each other.”

That’s it. There’s no real investing advice or takeaway here. Just monkeys playing “mind-Pong,” and maybe another inside look at Elon Musk, the mad scientist. What’s next? Brain-chipped monkeys driving Teslas? I shudder to think.

Oh, by the way … if TSLA’s valuation is just too much for your portfolio, or if the Tesla hype-machine has your brain playing monkey Pong, I’ve got a much better way to play electric vehicle (EV) revolution.

And it all starts with the “12 million mile battery!” Click here to learn more! 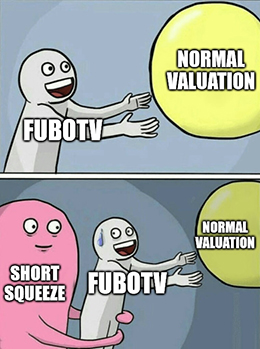 Between wired monkey brains and squeezing sports shorts, I’m not painting many pretty pictures today, Great Ones. But this one could be worth your attention…

If you read last week’s Great Stuff issue on heavily shorted stocks, you know that FuboTV (NYSE: FUBO) is among the top six. More than 65% of FUBO’s float is sold short right now, making it a prime target for a potential squeeze.

That squeeze play was just juiced this morning when Wedbush reiterated its outperform rating and boosted its price target from $40 to $50 on FUBO.

According to Wedbush, FuboTV is “well positioned with its ‘lead with sports’ strategy and competitive pricing to compete for a favorable share” of a streaming TV market.

Favorable share, indeed. FuboTV is one of the only options for live sports streaming.  The company is also looking to integrate sports streaming with sports betting. That’s two great revenue sources for the price of one.

FUBO was up more than 11% on the news. As regular readers know, we don’t chase these kinds of daily spikes.

That said, I’m keeping FUBO on my radar as a potential addition to the Great Stuff Picks portfolio. If we’re being honest, I should have added FUBO back in the first week of January. For now, we’re just looking for a reasonable pullback or consolidation period for an entry point. Stay tuned! 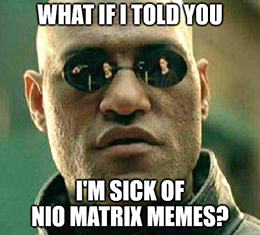 Great Stuff’s favorite Tesla competitor was back in the hot seat today.

Nio (NYSE: NIO) released its January delivery numbers, and boy, were they impressive. The company dropped some 7,225 EVs last month, a 352% increase over January 2020. It was yet another monthly record and the tenth-straight two-fold year-over-year increase in deliveries.

Despite starting 2021 off in high gear, NIO shares fell roughly 3% on the news. It seems some investors are concerned that deliveries only rose 3.1% from December’s tally. Nio’s bullish sentiment was also undermined by a 352% increase in January deliveries from EV competitor XPeng (NYSE: XPEV).

While competition is certainly heating up in the Chinese EV market, strong deliveries from two hometown EV makers tells me that U.S.-based Tesla is about to face some serious headwinds.

As I’ve stated before, Nio is my odds-on favorite for growth in the Chinese EV market. And, if you’re looking to get in on NIO shares, today’s pullback may be just the opportunity you’re looking for.

I hope you’re ready for earnings season, Great Ones, because we’re about to be flooded with quarterly reports!

I mean, just look at today’s Chart of the Week, courtesy of Earnings Whispers: 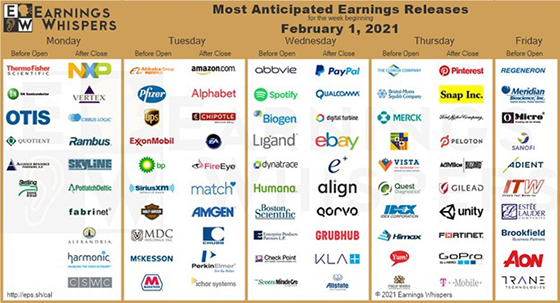 There’s literally something for everyone in here!

Tomorrow offers up earnings from Amazon.com (Nasdaq: AMZN) and Alphabet (Nasdaq: GOOGL). Both are expected to blow past Wall Street’s quarterly expectations, though I would keep an eye on Amazon’s earnings after last quarter’s miss. Also, look for any updates or impacts from Alphabets growing legal woes.

How about video games?

We’ve got those too, with Electronic Arts (Nasdaq: EA) earnings arriving after the close on Tuesday, while Activision Blizzard (Nasdaq: ATVI) steps up to the plate on Thursday.

Video game makers had a banner year in 2020, as everyone not gaming the market on Robinhood was locked in on their PlayStations and Xboxes. This week, we’ll find out if the video game trend is spilling over into 2021.

Finally, I’ll be keeping a close watch on up-and-coming millennial social media companies Pinterest (NYSE: PINS) and Snap (NYSE: SNAP) — both of which enter the earnings confessional after the close on Thursday. Facebook (Nasdaq: FB) is clearly not the choice of the next generation, and it will be interesting to see if Pinterest and Snap benefitted from the 2020 backlash against the aging king.

While we are a financial newsletter, chock-full of witty banter and entertaining stock news, Great Stuff’s silver lining has always been its wonderful readers. Readers like you!

There’s a reason we call you Great Ones!

So, if there’s a company, stock or investing strategy you’re watching that you’d like to see covered in Great Stuff, let us know!

Or if you just want to write in and rant … like so many of you do … you can do that too! Let us know how you really feel about the silver rally or any of the craziness going on in the market right now.

Just drop us a line at [email protected] with all your thoughts, trades, memes, rants, raves and everything in between.

Forget About Traffic: This Startup Will Change Everything