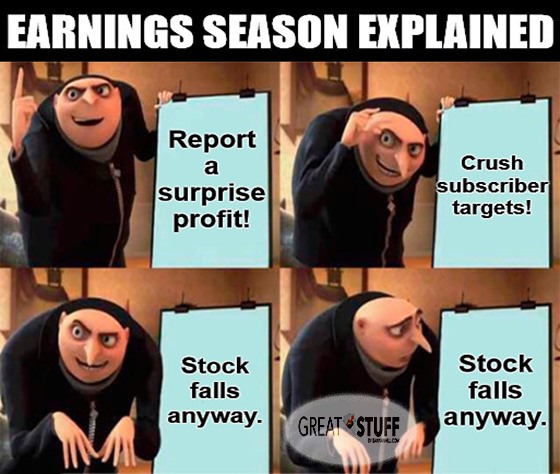 No, we’re not discussing The Last Airbender today. I just couldn’t resist the headline. But we will talk about the FAANG gang…

Anyway, remember how I talked about rising online ad revenue?

Remember … when Twitter (NYSE: TWTR) heaped on the ad revenue, and I said, “Just wait until Roku reports!” Remember?

That was cool, huh?

You know what’s a lot cooler?

Matthew McConaughey! I’ve never wanted to own a Buick before in my life.

Sure … it’s no Matthew McConaughey, though.

You see, Roku left Wall Street analysts dazed and confused last night when it reported a surprise fourth-quarter profit! Earnings came in at $0.49 per share, while analysts expected a loss of $0.05. Sales surged 58% to $649.9 million, blowing past the Street’s view by a cool $50.9 mil.

The real pièce de resistance … the coup de grâce was advertising sales. Roku’s ad revenue skyrocketed 81% to $471.2 million. See? What did I tell you? It pays to be an agnostic streaming platform … it pays big.

But it wasn’t all about the Benjamins. Roku is currently sitting on 51.2 million active accounts after adding 14.3 million last year. That’s a lot of Rokus.

Looking ahead, Roku boosted first-quarter guidance to between $478 million and $493 million, eclipsing the consensus target for $463 million. It’s almost like Wall Street analysts have no idea how to deal with Roku.

They better learn quick. The company is crushing competition from Amazon FireTV, Google Chromecast and AppleTV. That’s like half of FAANG right there! And Roku is beating them all.

So, naturally, after it reported a surprise profit, beat expectations and raised guidance … ROKU shares fell. That’s so 2020s.

But, never fear Great Stuff Picks readers! You’re still sitting on a gain of nearly 400% — that is, if you got in back in May 2019 when I initially recommended ROKU. If you waited until my second recommendation in December 2019, you’re only up 200%. Sorry about your good luck? I guess…

Anyway, the bottom line here is that Roku’s revenue will continue to rise as more advertisers move to online ads. Online is where the content lives now, after all, and Roku operates the biggest online streaming platform in the market.

However, if you’ve made your gains … if you’ve hit your profit targets … there’s no shame in taking some money off the table, especially if you’re up 400% or 200%. Take half your position and let the house money ride, if that makes you feel better.

I’m just your Great Stuff recommendation monkey, after all. The SEC won’t even let me have skin in the game here. You need to trade your way, not my way. That said, congratulations on ROKU! This really is Great stuff. 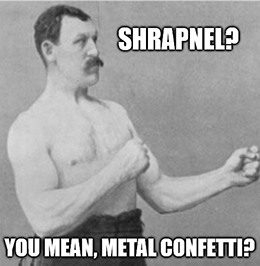 But at least I won’t hurl shrapnel. That’s something Ford Motors (NYSE: F) and I don’t have in common. Actually, we don’t have a lot in common, now that I think about it. I think it’s time we broke up, Ford…

Ah, yes … shrapnel. So, remember those faulty Takata air bags? You know, the ones that can explode and hurl shrapnel? The ones that killed 27 people worldwide?

Yeah, about those. Ford lost track of some of them. Just … poof, misplaced them. Funny story, the company didn’t purge those air bags from stock, and some of them could’ve been used in crash or theft repairs.

In an effort to avoid egg on its face — and shrapnel in yours — Ford recalled some 153,000 Ranger pickups from the 2004 through 2006 model years. Furthermore, Ford recalled another 1,100 vehicles across a broad range of models that could’ve received the Takata air bags during repairs.

Not so crazy ‘bout that Mercury now, are you, Alan Jackson?

There was one bright spot in Ford’s PR lineup today, however. Frosty Texas owners of the 2021 hybrid Ford F-150 called the truck a savior due to its PowerBoost onboard generator.

“Without it, I would have been in the dark and cold like everybody else in the neighborhood,” Randy Jones of Katy, Texas, told CNBC.

Some estimate space will be a $1.4 trillion industry in the next decade. So, the time to position yourself for the biggest gains possible is RIGHT NOW. 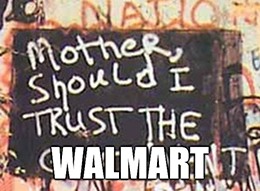 Earnings season wouldn’t be complete without the world’s largest brick-and-mortar retailer, and so Walmart (NYSE: WMT) stepped into the earnings confessional last night to rectify that.

The results were as creatively diverse as Walmart’s clientele, though. Earnings of $1.39 per share missed targets for $1.59 per share. Revenue rose 8.6% to $152.08 billion, beating Wall Street’s target.

The only real point for excitement was the 69% surge in online sales. It beat the consensus view for a 66% gain, but it’s down from an average of 83% over the prior three quarters.

Still, Walmart had a few other tricks up its sleeves, such as hiking its quarterly dividend to $2.20 per share and unveiling a new $20 billion stock buyback program.

Oh … and lifting wages for store employees to $13-$19 per hour — a development that worried some investors about future profits.

After starting the day off in negative territory, however, WMT eventually settled up about 1%. So, all’s well that ends well. 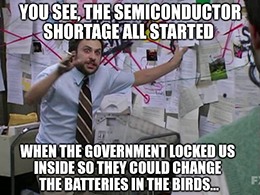 Remember when we talked about 3D printing the other day? I know, Wednesday was forever ago, so here’s a refresher.

Oh great, here we go on about “additive manufacturing this” and “carbon composite that” again.

No, but I mentioned a century-old company called Cincinnati Inc. It’s a machine shop’s machine shop — a company that makes machines that other companies buy to actually make the stuff you buy.

Longtime Great Ones know that the semiconductor market has its own “Cincinnati Inc.,” if you will. Applied Materials (Nasdaq: AMAT) plays that same role for computer chips, building out the tech that chipmakers then use to, you know … make chips.

Some call it “materials engineering.” Others call it atomic-level materials modifying. Great Stuff Picks readers call it a 100% gain.

We recommended the stock back on New Year’s Eve, 2019. And if you’ve tuned out the semiconductor sector for the last year-plus, first off … why? We’re making bank over here. Second, chipmakers were wringing their hands over a massive chip shortage all 2020 long.

Long story short, said shortage plays right into Applied Materials’ wheelhouse. Anyone looking to ramp up production needs more equipment for chipmaking — and they all hit up AMAT, judging by the semiconductor pro’s latest report.

CEO Gary Dickerson expects that semiconductor spending will continue to grow as part of a “decade-plus investment cycle.” Chipmakers still have some catching up to do before the chip shortage wanes, and that’s more and more cash in AMAT’s pocket.

The company expects next quarter’s revenue to grow, landing between $5.19 billion and $5.59 billion. Analysts only predicted $4.96 billion for next quarter’s estimates, and AMAT soared upwards of 8% today on the news.

Congrats if you’ve held on to AMAT this long … but keep holding for more! 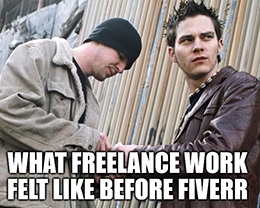 Considering we’re in the earnings confessional, I have a confession to air myself. Even as an ex-freelancer, I’ve never heard of the job platform called Fiverr (NYSE: FVRR).

If you haven’t heard of it either, join me under my rock because the rest of the Great Stuff team was quick to fill me in. “Oh yeah, it’s like Upwork or Gigster,” I was told. No help, that was. To Google, I went. Yoda … I have become.

Turns out, Fiverr is one of the new, shiny gig economy websites where anyone can market their skills and take odd jobs online. Digital design, editing and proofing, web-building, graphics, podcasting — Fiverr lets you post to sell your services or hire a freelancer for a project.

2020 was the year of the side hustle, and Fiverr’s earnings show it. Revenue shot up 89% year over year to reach $55.9 million, beating estimates for $54.1 million. Per-share earnings were in line with estimates at $0.12.

Fiverr also acquired a new creative talent platform earlier this week called Working Not Working to expand the user base and services offered on its site. The company expects last year’s growth to continue long into 2021, with full-year revenue growth estimates up between 46% and 50%.

Have you heard of Fiverr? Better yet, have you used the freelance platform for yourself? Let me know at [email protected].

Congrats, Great Ones — you made it to the weekend!

If you’re looking for something to do that doesn’t involve writing in to your favorite e-zine (wink wink, nudge nudge), here’s a podcast for you to check out: The Charles Mizrahi Show.

I know some of you get a monthly dose of Charles’ no-BS research in Alpha Investor, but here’s your chance to hear him chat up a new guest every week (for free, might I add). And not just faces from the finance biz, either: Charles recently had on a former KGB spy, an ex-Navy SEAL and even Paul Mampilly.

Click here to catch up on the latest episodes! And be sure to subscribe, so you don’t miss out when the next episode drops.

Forget About Traffic: This Startup Will Change Everything