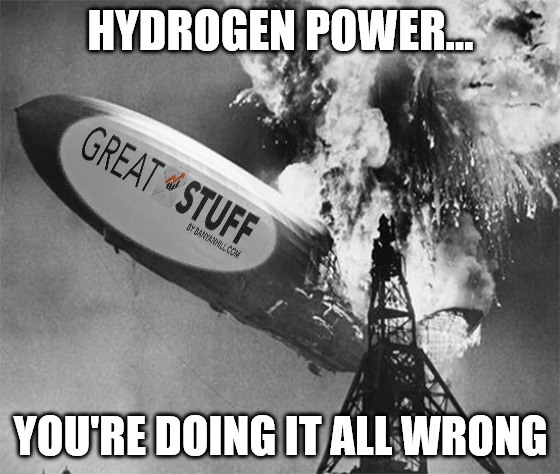 Great Ones, I have a red-hot hydrogen investing tip for y’all today.

Hydrogen, as you all know, is the green fuel of the future. It’s better and cleaner than normal battery power found in today’s electric vehicles (EVs). I mean … it powers the sun, for heaven’s sake — and nobody has flown up to refuel that thing in billions of years.

Hydrogen’s only byproduct is oxygen and water. Both good things, right? I mean, for people. If you’re a silicon-based lifeform, I’m sorry … but that’s just how we roll on Earth.

What’s more, hydrogen can eventually be made straight from water alone — once the refining process is streamlined to be more cost-efficient, that is. In the meantime, you can make hydrogen from existing oil and natural gas supplies.

And finally, hydrogen can use existing gas station fuel pumps, transportation pipelines and infrastructure that currently transports oil and natural gas — with some cleanup and a few modifications, of course.

That’s enough gushing on hydrogen power. What about Hyzon?

I know what you’re thinking when it comes to trucks and hydrogen fuel cells: Please not another Nikola! Tell me they don’t push their trucks down hills!

Hyzon does not, in fact, push its vehicles down hills. It doesn’t have to. The company has about 400 commercial fuel cell vehicles already on the road! Furthermore, Hyzon plans to produce and deliver about 5,000 fuel cell buses and trucks by 2023, with annual capacity of 40,000 vehicles per year in 2025.

What? A vehicle fuel cell company with actual products and production? Get out of here!

Wait … you said privately owned. How does that help?

This is the best part, Great Ones. According to the infamous “people with knowledge of the matter” — they’re close relatives of “people familiar with the deal” — Hyzon Motors is going public via a special-purpose acquisition company, or SPAC.

And that SPAC is Decarbonization Plus Acquisition (Nasdaq: DCRB).

Decarbonization Plus held talks about raising new equity — i.e., shares and cash — for the merger. Those talks reportedly valued Hyzon at more than $2 billion. Said deal could be official within the next week.

Here’s the point where I tell you that SPACs are speculative and potentially very risky … especially in Hyzon’s case, since the deal isn’t official yet. Please use caution and realize that you could potentially lose a lot of money if you choose to dive into Hyzon.

We all remember what happened with Nikola (Nasdaq: NKLA), after all.

That said, if you’re looking for another red-hot hydrogen fuel cell investment, Hyzon could be just the ticket. Of course, if the SPAC waters are a tad too speculative for your liking, we still have you covered on the EV boom!

Just click here to learn more about the one company that holds the key to unlocking a historic energy revolution. 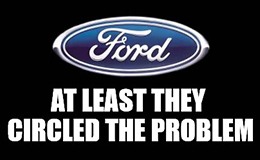 Any Icehouse fans out there? Of course not … I doubt many of you remember this 1987 one-hit wonder.

We’re here to talk about Ford Motor (NYSE: F). The Big Blue Oval just reported a quarterly loss of $2.8 billion, or $0.70 per share. What’s worse is that analysts expected a loss of just $0.07 per share. Ouch!

Revenue also missed expectations, arriving at $36 billion versus the Street’s target of $36.8 billion.

But earnings weren’t the big news for Ford. The company upped its electric game by promising to spend more than $22 billion on EVs — more than doubling its previous commitment. Ford also laid out plans to drop $7 billion on autonomous vehicles.

In a statement alongside the earnings release, CEO Jim Farley said: “The transformation of Ford is happening and so is our leadership of the EV revolution and development of autonomous driving.”

Your leadership of the EV revolution? Are you delusional, Jim?

It’s clear what’s going on here. There’s so much distance between Ford and the actual leaders in the EV market that the company thinks it’s in the lead. That’s not a lead, Ford. That’s the vast expanse of open ground you still need to cover just to be in the EV race.

Yes, there are all-electric versions of the Mustang, Bronco Sport and F-150 coming to market. But Tesla (Nasdaq: TSLA) is the current king of EVs, and General Motors (NYSE: GM) promised to go full electric. (And we won’t even mention the EV boom coming out of China.)

By comparison, Ford is still merely dabbling in the EV market … and given where that market is headed, investors should be concerned. 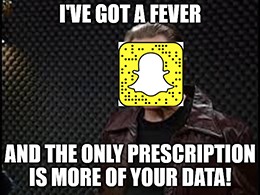 I’ve often said in Great Stuff that Snap (NYSE: SNAP) has the potential to become the next Facebook (Nasdaq: FB). I didn’t know just how true that was until today…

We all know that Facebook is a Baby Boomer and Gen X social media platform. Very few Millennials and even fewer Gen Z members use Facebook.

The younger generations have trended toward Snapchat, Pinterest (more on that in a bit) and TikTok.

But, according to Snap’s quarterly report, there could be a problem with that rise to power. Specifically, Snap said that Apple’s (Nasdaq: AAPL) new privacy features could negatively impact its revenue growth. Facebook recently — and vehemently — made the exact same argument.

In other words, Snap must’ve drunk from the same massive personal-data firehose as Facebook. It paid off well last quarter: Snap beat earnings and revenue expectations amid strong growth in daily active users. Guidance for a post Apple-data-smorgasbord, however, was another matter entirely.

Snap expects revenue of between $720 million and $750 million for the current quarter — above estimates for $705 million. However, Snap predicts an earnings loss of $50 million to $70 million, while analysts expected a profit of $17.5 million.

These lost earnings are directly related to Apple’s new privacy features. It’s probably due to Snap spending money to find new data sources after being dropped from Apple’s easy street.

But the really big issue comes when Millennials and Gen Z users find out how similar Snapchat’s data collection policies resemble Facebook’s. That won’t sit well with them at all. 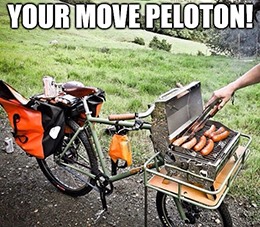 Per-share earnings came in at $0.18, doubling estimates for $0.09. Revenue more than doubled year over year, landing a hair above expectations: $1.06 billion versus the $1.03 billion estimate.

That marks a 128% sales leap on the quarter (a whole lot of pricey bikes, that is). And Peloton even boosted full-year rev estimates as well!

A double beat and raise! What’s “almost” perfect, then?

The company still sees huge, pandemic-propelled demand for its bikes and class subscriptions. The latter, those virtual gym memberships by another name, boomed in the pandemic, with the number of paid subs rising 472% year over year.

Management announced it would dedicate cash to remedying supply chain problems, with hints that this might hurt short-term profitability. Investors gasped in horror and sent the stock down 7%. More spending?! The nerve! How dare a company invest in itself.

Yet, Peloton’s trying to fix the same issues that investors and customers have complained about. This should help the company in the long run, meaning today’s drop could be a cautious buying opportunity if you believe all this e-bike hype.

You’re so cagey today, Mr. Great Stuff. What’s with the caution? Why can’t I just throw money at every ticker I see?

It’s a simple problem with a clear-cut solution: shipping, supply and demand. How much will Peloton spend fixing its supply chain to crank out more bikes? And how much will these delays impact customer satisfaction?

Remember: Peloton spent $420 million in December to buy out its fellow exercise equipment peddler Precor. You know … to try to add more manufacturing might domestically and fix these supply problems.

But those new facilities won’t pump out Pelotons until the end of this year. That’s virtually forever in the pandemic clime. With the vax rollout and cases abating, what will the at-home fitness market look like by the end of 2021?

It’s anyone’s guess if the soaring demand will stick around until Peloton’s factory death star is fully operational. It’s also up in the air how exactly Peloton plans to improve its supply chain so drastically. Such is the risk you take by buying into PTON right this very minute.

Peloton must position itself like the Apple of the exercise bike world, building up that sleek, shiny allure while adding an air of exclusivity around the product. How’d you get your hands on a Peloton?! Who’d you bribe?

Until then, it’s shape up or ship out for Peloton, and we’ll see how the reinvestment plans shake out. 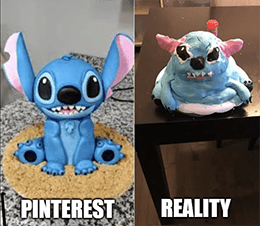 Great Ones, I need some help.

Ha, about time you realized it, Joe…

No, I need your help digesting these newfangled social media realms. I used to be with it. But then they changed what “it” was.

So … what’s the deal with Pinterest (NYSE: PINS)? What’s the appeal? (Let me know right here, so I’m not just yelling vague questions into the void like a madman … like usual.)

Make no mistake, I completely understand Pinterest’s appeal to marketers. However users end up on the platform, it’s an ad-spending gold mine.

Hordes of stuck-at-home folks pinning ideas for crafts, DIY, fashion, home décor and cooking? Sign me and my hypothetical ad dollars up!

The major key here is how Pinterest has amped up its marketing game over the past few years. Last quarter, the number of businesses using the company’s shopping ads format increased six times over.

The network effect is in, well, full effect. Active users rose 11% year over year, and the more users you have on board, the more marketers you attract. Rinse, repeat. Just don’t get all Facebook-y with the personal data usage, and PINS is in a golden spot for the digital ad migration.

P.S. Sorry, I don’t think the Great Stuff official Pinterest board is happening anytime soon … no matter how many times my daughters tell me it’s “where all the cool kids are.” Don’t forget to peep our Facebook, Instagram and Twitter pages, though!

Congrats, Great Ones — you made it to the weekend! Your reward (other than the weekend, I mean) is a fresh new podcast from our friend here at Banyan Hill: Charles Mizrahi!

If you’ve not tuned into The Charles Mizrahi Show, why not start your weekend with some Greatness?

I know many of you follow Charles in Alpha Investor, but if you’ve never heard any of the Street legend’s stories before, now’s your chance! (For free, might I add.)

He invites an esteemed celebrity guest onto the podcast each week. Mike Huckabee, Sean Spicer and even Paul Mampilly have all been on air with Charles recently, talking up the power of American capitalism and what it means to live the American dream.

Click here to get caught up on the latest episodes! And be sure to subscribe, so you don’t miss out when the next episode drops.