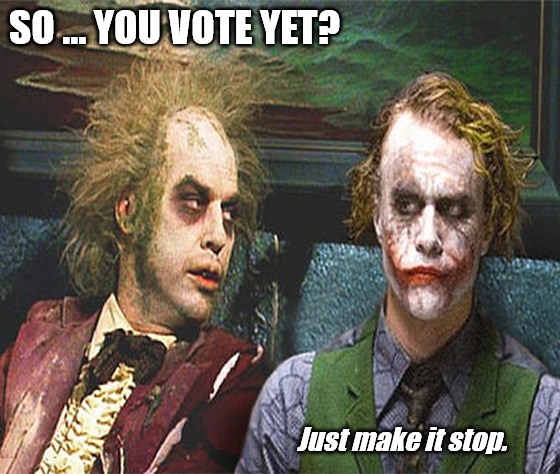 We are close, Great Ones! One of the major cogs in the vast volatility machine is about to be put out of commission.

Election day is tomorrow. While I don’t expect a clear winner before the day is up, we should be able to put this uncertainty driver to bed very soon.

We’re so close I can almost taste it. Aaak! Pthowey … bad idea. Don’t taste it.

But there’s more than just the election this week. So much more…

We have the Federal Open Market Committee meeting on U.S. monetary policy and interest rates on Tuesday and Wednesday. Nothing much is expected to happen, but that won’t stop Wall Street from scrutinizing Fed Chairman Jerome Powell’s every word.

We have the October U.S. jobs report on Friday. Expectations see a nonfarm payrolls rise of 600,000 last month, with the unemployment rate predicted to dip from 7.9% in September to 7.6% last month.

Finally, third-quarter earnings season continues to roll on. This week brings another fresh wave of reports … but more on that later.

Oh, right! Then there’s the pandemic…

Even with everything else going on this week, we all know that everyone’s talking about the election. On that front, BCA Research has some advice — and it’s oddly similar to Great Stuff’s.

According to BCA Research, there’s a 72% chance of a “reflationary outcome.” That means “market rally” in analyst speak. BCA forecasts a 27% chance of a Democrat sweep and a 45% chance that President Trump is reelected — both reflationary events.

That said, BCA predicts a 28% chance that Joe Biden will win with a Republican-controlled Senate. This is a “deflationary outcome,” says BCA.

“The 28% odds of a deflationary outcome are too elevated to ignore when the pandemic is reaccelerating and when the stock market is as expensive as it currently is,” BCA said in a research note. As such, the firm believes that it’s “too early to try to bottom fish the market.”

In other words, stay in your holding pattern for now, and keep your powder dry. But be ready to move when the time is right. It’s the Great Stuff mantra.

Editor’s Note: Nobody is talking about this, but a fleet of cargo ships are soon expected to start cruising across the Atlantic. When they hit ports, they’ll unload a breakthrough — $15.7 trillion in new wealth will could be created by 2030.

And by taking one simple step, you can learn how to make a fortune starting today. Get the details here. 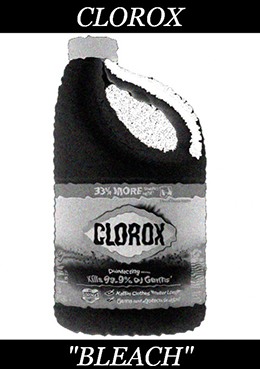 Since August, Wall Street has underestimated the power of clean. This morning, Clorox Co. (NYSE: CLX) reminded investors that cleanliness is, in fact, godliness.

The cleaning products specialist powered through consensus estimates like bleach through a stubborn stain. Clorox posted fiscal first-quarter earnings of $3.22 per share, more than doubling year-ago results and blasting Wall Street’s expectations by $0.90 per share.

And Clorox’s future looks just as bright as freshly washed linen. The company expects 2021 sales to rise between 5% and 9%, with per-share earnings of $7.70 to $7.95. Both figures left Wall Street’s expectations in the dust.

I know some Great Stuff Picks readers were worried about CLX’s decline from its August top. However, the uptrend is still intact, and you should sit on a gain of about 40% since Great Stuff recommended CLX back on January 31.

This pandemic is far from over, and people will need to stay clean. Look for another solid year for Clorox in 2021, and keep holding CLX!

The Bad: The One? 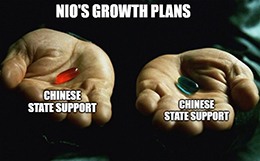 I typically don’t worry too much about Tesla Inc.’s (Nasdaq: TSLA) growth — the company has the U.S. electric vehicle (EV) market locked down. I do, however, worry about Tesla in China.

Yes, I know these numbers are still well below Tesla’s deliveries and sales. But Nio has come back from the supposed “dead” so many times … and it’s all thanks to Chinese government support. Furthermore, Chinese consumers are country-loyal and frugal.

If a Chinese-owned EV maker’s products are cheaper, that’s where Chinese money will go. Tesla may dominate the rest of the world’s EV markets, but it’s about to have a real fight on its hands in China — the world’s fastest-growing auto market.

Several Great Stuff readers wrote in about NIO and how well the stock’s performing for them. Kudos to all of you!

NIO isn’t an official Great Stuff pick … and if you’re wondering why, it’s because I can’t find an entry price I’m happy with. I mean, the stock just keeps going up, and I keep waiting for a consolidation period. It’ll come eventually. I’m not one to cave to FOMO that easily.

That said, feel free to write in to Great Stuff and tell me why I’m missing out on NIO — or why I’m wrong about Tesla’s ugly fight in China. 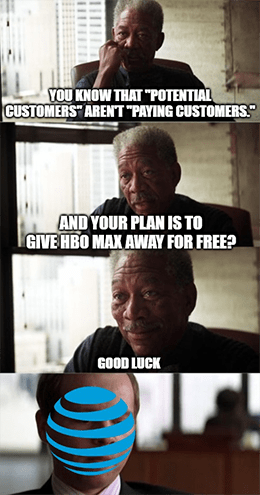 Yes, I know this was all reported last week. AT&T’s quarterly report was apparently good enough to draw plenty of analyst praise and halt a 10-day losing streak. Many of those analysts cited HBO Max and its 38 million subscribers as a high point.

Funny thing about those 38 million subs…

AT&T included all potential HBO Max customers in that number. If you pay for HBO on cable, you count as an HBO Max sub. Those figures also include customers with access to HBO Max through streaming platforms like Hulu+ Live and AT&T’s TV Now service.

As Motley Fool’s James Brumley puts it: “That puts the company’s potential cable or virtual-cable market size at just over 38 million consumers, according to AT&T’s most recent quarterly report.”

But an even-more-important bit was overlooked. While 38 million customers are eligible for a free HBO Max subscription, only 8.6 million actually activated the service.

In short, AT&T has trouble even giving away HBO Max.

Whatever it is, AT&T’s HBO Max hasn’t panned out to be the savior that investors hoped it would be.

I pan AT&T a lot in Great Stuff, but that’s only because I know how great the company could be … if it got out of its own way.

My solution? AT&T needs to roll all of its online streaming packages into HBO Max. Then, get Max on Roku and Fire TV. Maybe even consider a $2-per-month price cut to the Max service for six months to boost sub numbers.

After that … it’s all gravy.

Will AT&T do this? Nope. But I can dream.

Bleh, I hate how everything you read right now is so pointed and election-y. Wish there was better stuff to read in the news.

If the ins and outs of corporate earnings get your motor running, you’re in luck! There’s still a palate-cleansing glut of reports slated this week.

Let us know in the inbox what earnings catch your eye in our Chart of the Week, courtesy of Earnings Whispers on Twitter. Personally, my eyes home in right to the Papa Johns’ logo, but that’s beside the point.

Big-brand, household-name earnings are lighter this week, but that’s a relative term this season. There are still storied tales of industry snapshots to see, though the broad, sector-wide themes we’ve seen in weeks past are a bit tougher to pick out of the earnings crop. 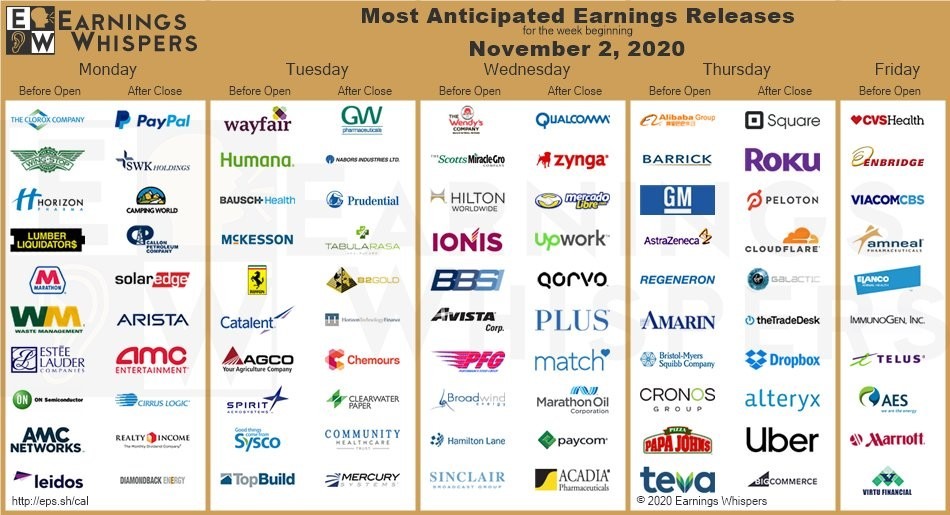 For those of you who thought AT&T was a tangled-woven web of woe, AMC Entertainment (NYSE: AMC) is here with its do-or-die report this afternoon. What everyone wants to know is how much more cash, debt and bridges the company has left to burn as it clings on.

Is there any hope of the Bezos bunch coming back into the picture?

Both offer free and simple ways to send and receive cash, with a tinge of that crypto-buying hype for good measure. With Square more exposed to physical small businesses with its payment processing systems, we’re looking at how much pandemic finances have hurt or helped either fintech servicer.

It’s been a looooong time since we ragged on Wayfair Inc. (NYSE: W) in these pages — back in April, actually. Once upon a pandemic quarter, Wayfair spent out the wazoo on ad campaigns, undercutting its boost from stay-at-home folks who realized their spaces were more drab than previously thought.

But that spending didn’t stop the stock from more than doubling in the summer run-up and pulling back since then. I’m watching to see if Wayfair maintains its standout growth … with healthy-enough margins to stay afloat.

On the health care front, McKesson Corp. (NYSE: MCK) has you covered on all things medical supplies, with CVS Health Corp. (NYSE: CVS) pulling its weight for the home front. When it comes to personal protection and pharmacy staples, these are your two biggest names this week.

Another duo to watch is Hilton Hotels Corp. (NYSE: HLT) and Marriott International Inc. (Nasdaq: MAR) for an update on the teetering state of travel. That is … for all of you not wandering with the Winnebago life.

With Roku, we’re not worried about any one streaming service losing steam — no sir! We’ll get to see how Roku’s benefitted from serving almost all of the streaming media’s masses during another pandemic quarter shortly.

Last but not least is Uber Technologies Inc.’s (NYSE: UBER) earnings report and its own political quagmire, as California voters decide whether or not gig economy companies like Uber and Lyft have to classify their workers as contractors or bona fide employees.

While Uber sees how long it can avoid the reality of having a workforce … we’ll keep you up to speed on all things earnings!

Get Your Stuff Together, Great Ones

It’s a big week, Great Ones, but just know this: You’ll be OK.

Through the deluge of data and diatribes, we’ll be by your side helping you laugh at Wall Street’s shenanigans and stop B.S. in its tracks. You should’ve prepared your portfolio for volatility long, long ago … but now’s the time to prepare yourself for any uncertainty ahead.

Stick to your guns, keep your powder dry and stick with Great Stuff. We’ll stick by you!

In the meantime, let us know how you’re doing out there in this crazy market. Share what’s on your mind with [email protected] night or day.

We’d love to feature your email in this week’s edition of Reader Feedback! We’ll be back tomorrow, so let’s take this to social media for now: Facebook, Instagram and Twitter.