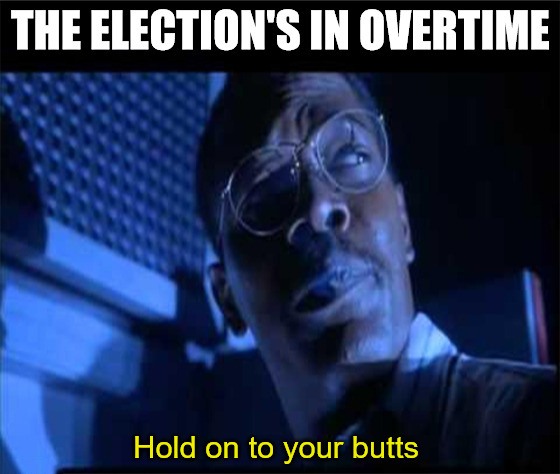 If you do anything on Election Day besides vote, can you please make a meme of the Samuel L. Jackson quote from Jurassic Park where he says, “Hold on to your butts.” … I think it would be a perfect fit for election day and all the outcomes that may happen, the volatility, etc.

Thank you for writing in, Klaus. Consider your request granted — I think it’s rather fitting today.

There were a few likely scenarios heading into the U.S. election.

The odds-on favorite, according to BCA Research, was a “reflationary outcome” — aka, bull market results. Those outcomes included some combination of President Trump’s reelection with a Democrat-controlled Senate or a Democrat sweep of the election. BCA gave these outcomes a 72% chance of happening.

What’s actually happening falls on the other end of the spectrum: a Republican-controlled Senate with Joe Biden as president.

Votes are still being counted, so this is all up in the air. However, this BCA projected 28% longshot appears increasingly likely. And it portends a “deflationary outcome” due to political gridlock in Washington.

On the topic of gridlock, Pantheon Macroeconomics Chief Economist Ian Shepherdson noted: “With Republicans still in charge in the Senate, we’d be surprised to see a stimulus bill early next year much in excess of $500 billion, far less than the $2 trillion we expected if Democrats had won.”

Remember that Wall Street is counting on stimulus to offset the pandemic’s growing economic drag.

Meanwhile, the other scenario unfolding is a contested election. “We were getting ready to win this election. Frankly, we did win this election,” Trump claimed last night. The indication is that the president will take his claims to the Supreme Court, setting up a repeat of the 2000 election.

“The odds have increased that the election comes down to one state now, which means a still-heightened chance of litigious outcome,” said Strategist Charlie McElligott of Nomura Securities.

Hold on to your butts, indeed.

So, we’re looking at the likelihood of continued gridlock in Washington and a drawn-out legal battle over the presidency … again. In layman’s terms, that means a smaller-than-expected stimulus and more short-term uncertainty.

What you need right now is someone to help you hold on to your butt.

No matter how contested or convoluted the election results are, there will always be pockets of opportunity across the market. You need someone to help you find those pockets. Someone to guide you through this maelstrom … someone like the small-cap sultan himself, Ian King.

Ian’s said that “2021 could unleash the biggest tech stock bull market we’ve ever seen … small-cap tech stocks will dominate in the new year.” And he’s isolated one such tech stock that could beat electric vehicle makers like Tesla and Workhorse in a big way…

This one tiny $100-million firm is already growing fast, setting up its patented, mobile EV charging stations across the country. And it just hit a “tipping point” that could send its stock up 1,000% in as little as the next 12 months.

I’d love to fill you in myself, but I’ll let Ian do the honors. Get the full details here — ASAP!

Good: Tale as Old as Time…

Ahh, the “multiyear share gain and margin expansion story!” My mom used to read that one to me at bedtime when I was but a wee lad. Puts me right to sleep.

Wee lad? Did the election break you, Mr. Great Stuff?

Bear with me for a minute, I’ll get there…

Goldman Sachs added Advanced Micro Devices Inc. (Nasdaq: AMD) to its “Goldman Conviction List” this morning. Which is good, because I don’t think any other firm would like it if Goldman added AMD to their list, but I digress.

Anyway, in addition to the “conviction list” add, Goldman also lifted its AMD price target from $84 to $96 — about a 28% upside from Tuesday’s close.

Valuation was the reason for Goldman’s bullish bump. In a note to clients, analysts said that AMD’s recent decline “presents a compelling opportunity to participate in what we expect to be a multiyear share-gain and margin-expansion story.”

Have you heard about the Corporate BS Generator? I’m convinced analysts live by this website every time I read one of these research notes.

Because of this, Goldman thinks AMD will make even more money as volume production brings down the company’s costs.

That’s it. That’s why Goldman lifted its price target and added AMD to its “conviction list.”

Meanwhile, Great Stuff has been bullish on AMD for quite some time. Welcome to the club, Goldman.

Better: The People Have Spoken 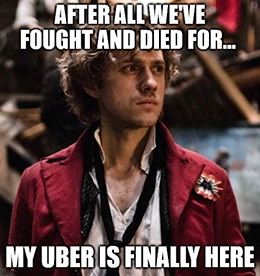 Do you hear the people sing? Singing the songs of angry men? It is the music of a people who will Uber and Lyft again!

With Proposition 22’s passing, Uber Technologies Inc. (NYSE: UBER) and Lyft Inc. (Nasdaq: LYFT) are exempt from labor laws designed to make drivers employees instead of contractors. Prop 22’s passage means that drivers are not eligible for employee benefits, but it does entitle them to things like minimum earnings and vehicle insurance.

“Overall, while Uber still faces regulatory challenges in the U.K. and other U.S. States, the vote helps alleviate a big uncertainty, and could open the stock to new investors, potentially aiding valuation,” Bank of America analysts said in a research note this morning.

Unsurprisingly, UBER and LYFT both rallied on the news, jumping about 12% each. 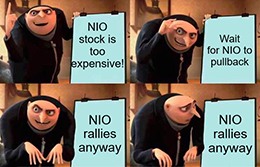 When Nio Inc. (NYSE: NIO) sold 88.5 million new U.S. American depository receipts (ADRs) at $17 each back in August, Chairman William Li said the company planned to use that money to expand into Europe.

Well, it turns out that Li wasn’t just whistling Dixie … at least according to unconfirmed media reports. Those are the best kind of reports, aren’t they?

Rumor has it that Nio will sell its ES8 and ES6 electric vehicles (EVs) in Europe next year. The first Nio House store is said to open in Copenhagen, Denmark. What’s more, under project “Marco Polo,” Nio aims for 7,000 EV sales in the first two years.

The irony of naming the project after a European trader who traveled to China is not lost on me, I assure you.

The news follows Nio’s impressive October deliveries report, rolling out 5,055 EVs during the month — a 100% increase over year-ago levels.

NIO shares surged roughly 11% on the news. Furthermore, the stock is up a whopping 1,113% so far year to date. I’ve repeated in Great Stuff that I’m looking for an entry point for NIO. Maybe it’s time to take a page out of Clark Griswold’s book in European Vacation and be a pig.

You tired of polls yet? No?

We’ve got another hot one for you today, branching off of our previous Poll of the Week. Amid last week’s plunge, we wanted to get a temperature check on all you out there — just readin’ the room, so to speak.

Namely, we asked if you still bought up a storm while the market dropped, sold into the weakness or sitting on the sidelines. The results here, at least, were hardly contested — though you might be surprised by what your fellow readers voted.

By and large, just under 79% of you are still in and buying in this shimmying shuffle through uncertainty. Another 14% of you are on the sidelines laughing and/or fighting off the FOMO. Finally, about 7% of you are selling out, laying down (but probably not sucking up to the man).

Short term — as in, up to the very second I write this — buying the dip was likely a good idea, depending on which corner of Wall Street you shopped around for your bargains. Long term? Throw it into the “too soon to call” washing machine of uncertainty.

Anyway, that brings us to today’s question … what’cha buying?

I mean, just asking for a friend, ya know…

Judging by the Nasdaq, everyone and their mother piled into tech today, but we know that you Great Ones invest with a more complex palate, searching out that diversification zeal. So, where are you looking?

Gross generalizations are fine and dandy — in this poll, at least. Of course, if you’ve got more on your mind, why not drop us a line? [email protected] is the place, now’s the time.

Otherwise, click below and fulfill your civic duty as a Great One!

Your form has been submitted

Don’t worry: We won’t dish out the details on your super-secret picks. Mum’s the word. Until then, let’s talk about that Reader Feedback elephant in the room, shall we?

Unless you’re the one sending me random “totally not a virus” files from Dropbox, WeTransfer and Fubar … you have yet to write in to the Great Stuff inbox like Dick K., Klaus D. and the rest of the wild bunch. You’re still out there, right?

Write us today with your thoughts on the market’s crazy times and climes!

You might even see your email in tomorrow’s Reader Feedback roundup, where we cut the chit-chat and answer back to you, your emails and, oftentimes, the overcritical voices in our heads. It’s entertaining, trust me.