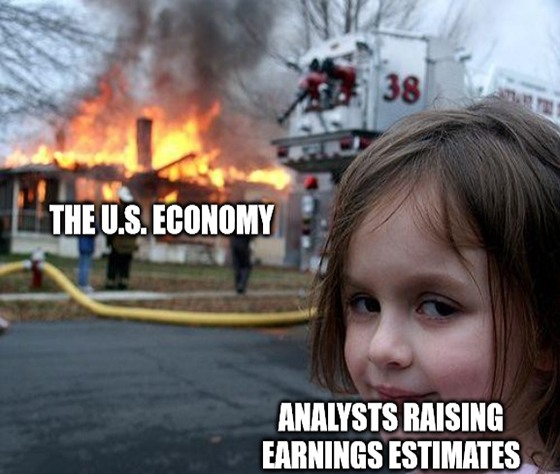 On Wall Street there is a tower, where analysts look out to the land to see traders quickly passing by.

This is for their own desire, lifting expectations to feel the power boiling in their veins…

I wanted to begin the week with a friendly voice, dear reader — a companion unobtrusive. But that song was so elusive … and we ended up with Greta Van Fleet instead.

Third-quarter earnings season kicks off this week, and projections are none too rosy.

In fact, despite the past few months of doom and gloom, Wall Street has high apple pie in the sky hopes. No fewer than two major financial rags — Barron’s and CNBC — published articles this morning detailing how this quarter’s results will be better than you think.

Specifically, Deutsche Bank Strategist Binky Chadha noted that the Atlanta Fed’s GDPNow model forecasts a 35% rise in economic growth for the third quarter. According to Binky: “This suggests the consensus is likely again underestimating the bounce in earnings.”

Looking back at the second quarter, 85% of S&P 500 companies beat Wall Street’s expectations, with an average beat of 20% or more. Analysts repeatedly cited this data when they raised third-quarter expectations.

But there’s a major caveat when looking back at the second quarter.

Analysts expected the worst in the economic shutdown’s wake and set their earnings targets accordingly. They clearly overshot, and many companies beat those rock-bottom targets … while posting year-over-year losses.

As such, many brokerage firms lifted their third-quarter earnings and revenue targets. The thing is … these adjusted targets look like rising optimism on the surface. But, in reality, these “rising expectations” are simply a function of analysts being better prepared this time around.

We’re about to find out how prepared analysts and investors really are.

Will the economic black smoke continue to rise? Or will investors whistle a highway tune when the curtain falls?

Either way, you can count on Great Stuff to be here for the third-quarter’s greatest hits and misses. So, stay on your toes and keep your radio dialed in right here. We’ve got you covered once the earnings reports start flying.

And we’re not just talking stocks. After all, making bank during earnings season doesn’t even have to involve stocks. Click here to find out how. 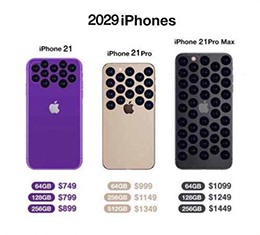 As if earnings season wasn’t enough, Apple Inc. (Nasdaq: AAPL) is poised to unveil the 20th iPhone iteration tomorrow. The big unveiling is dubbed “Hi, Speed,” leaving no mystery that 5G will be the focus of this year’s event.

Honestly, just call it: “Hi, Speed. Sorry we’re late!” Practically every major smartphone and mobilemaker on the planet already has a 5G phone on the market.

International Data Corp. reports that 4.2 million 5G devices were sold in the U.S. in the first half of the year. That 4.2 million only accounts for about 7.5% of smartphone shipments.

In other words, consumers are holding out for more 5G coverage, and Apple’s new iPhone could help spark that growth. That is … assuming Apple has more than just 5G to entice iPhone owners to upgrade.

In the past, iPhone customers have been more interested in better cameras and bigger screens than higher speed. The much-maligned iPhone 11 Pro was surprisingly popular with its triple-lens camera, making up 23% of last year’s sales. Meanwhile, the 2014 “supercycle” for iPhones centered on the iPhone 6’s considerably bigger screen.

The point is, Apple needs something bigger than just 5G to juice iPhone sales and justify its $2 trillion valuation.

Better: Pining for the Fords 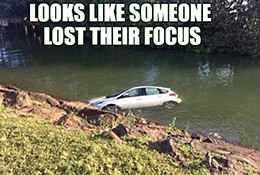 With electric vehicles (EVs) consuming all of Wall Street’s attention lately, few give much thought to old-school automakers. Benchmark Analyst Michael Ward changed that this morning. Ward upgraded Ford Motor Co. (NYSE: F) from hold to buy and set his price target at $10 — 38% above Friday’s close.

Ward cited Ford’s third-quarter earnings and new management team as catalysts for his bullish stance. “Better than expected North American production, a positive shift in mix, and improving metrics in the auto credit markets, in our view, are the primary drivers for better than expected earnings performance in the third quarter,” Ward told clients in a note.

Let’s break that down, shall we?

This, in turn, will lift Ford’s quarterly results. Furthermore, new CEO Jim Farley and his team will continue to expand on Ford’s success, helping to drive guidance and better revenue down the road.

Ward isn’t far off. Right now, Ford trucks don’t have much competition from the EV market. And they won’t for some time. I can’t see anyone driving a Tesla Cybertruck on the farms back home in the Kentucky farmland. It just ain’t happening.

The question, however, is how much low borrowing costs juiced Ford sales during the pandemic. We’ll find out on October 28 when Ford officially enters the earnings spotlight. 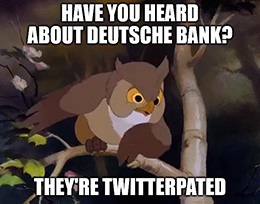 The pandemic sent ad spending spiraling down this year, and few places have felt the crunch more than social media firms. But Deutsche Bank Analyst Lloyd Walmsley sees this situation improving as we barrel toward 2021. (2021? It seems so far off right now…)

According to Walmsley, Twitter Inc. (NYSE: TWTR) has a “compelling bull case” to take full advantage of the ad spending taps when they finally open wide.

Citing a “big event landscape in 2021,” an ad server rebuild, mobile app promotions and a “high-margin subscription product,” Walmsley boosted TWTR from hold to buy. He also hiked his price target on TWTR from $36 to $56.

Twitter has certainly grown into the “big event” social media platform in the past four years. If it can maintain that level of excitement heading into 2021, and ad spending finally returns to pre-pandemic levels, Walmsley may be on to something big here.

TWTR rallied more than 5% on the upgrade. We’ll be sure to keep our eyes on this one as the year progresses.

After weeks of drought in the corporate earnings confessional, ‘tis the season once again. Between Wall Street’s mixed signals of depressed expectations and teeth-clenching hope, here’s what we’re watching most this week, courtesy of good ol’ Earnings Whispers: 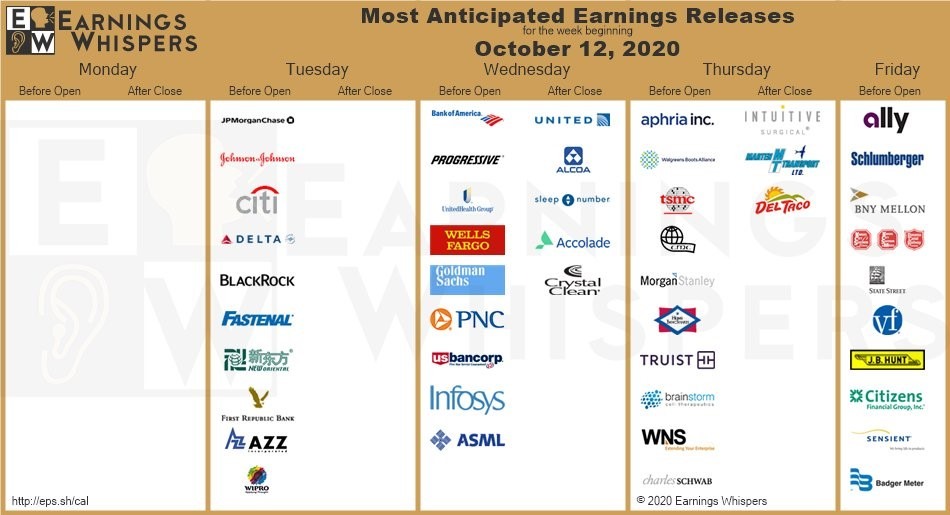 Obviously, the biggest name on my mind is Del Taco — but that was the case earnings or no earnings.

OK, we mentioned JPMorgan and its banking cronies up above, but this Chart of the Week makes it clear: Just look at aaaaall those banks up in the limelight this week!

It’s an all-out brawl in the financials arena.

Even the (relative) small fry like First Republic Bank (NYSE: FRC) and Citizens Financial Group Inc. (NYSE: CFG) will do their little turn on the catwalk. (On the catwalk, yeah.) So why should we care? It’s just fancy shmancy boring old bankers doing the same old thing, right?

With the band of banks reporting this week, it sets the tone for this whole upcoming earnings season. Analysts and talking market heads have kept the movie rolling about better-than-expected quarterly results. But the story’s getting old now, and banks will be first to look in the mirror and test that theory.

Personally, I expect standout stats from banks’ trading departments. But lending revenues are likely to be utterly abyssal due to low Fed rates. What Great Stuff’s looking out for is guidance — and whether or not any banks set aside more cash than usual for potential defaults.

Who knows? We may end up talking about banks each and every day this week — oh happy days!

After we hear from the big dawg traders, we’ll get a glimpse at how retail investors shaped up or shipped out over the past quarter when Charles Schwab Corp. (NYSE: SCHW) reports on Thursday.

After that, it’s a pick your poison situation when Delta Air Lines Inc. (NYSE: DAL) and United Airlines Holdings Inc. (Nasdaq: UAL) report. Will they put on airs and coax people into feeling safer toward flying? Or will we see the carnage of an industry barely held aloft sans stimulus?

That’s not our only snapshot at the changing consumer clime though: Johnson & Johnson’s (NYSE: JNJ) report shows what (and how much) people are buying amid the pandemic. Considering that JNJ owns virtually half the health-and-wellness brands under the sun … this should be much more interesting than your average CVS run.

Great Stuff: Earn Some, Burn Some

From the window to the wall, from the banks to the airlines, Great Stuff has you covered on the ups, downs and mixed bags this earnings season will undoubtedly deliver.

Have you been gearing up for the glut of earnings reports up ahead? Any companies you want to hear from most? What sectors do you think are set for dashed-hope catastrophe?

It only takes a second to share what’s on your mind with [email protected].

You might even spot your email in this week’s Reader Feedback installment! We’ll be back tomorrow, but until then, why not keep up with us on social media? We’re on Facebook, Instagram and Twitter.