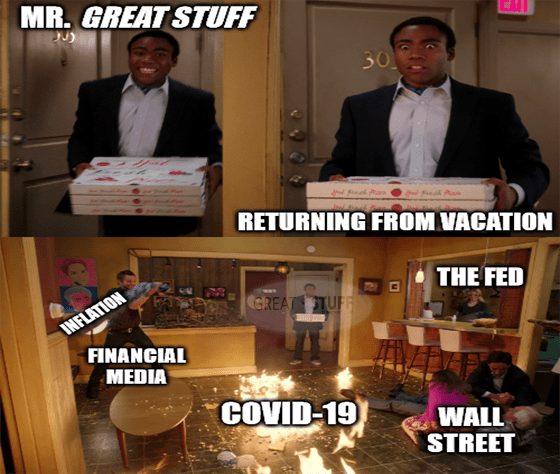 Vax In The Saddle Again

I leave for a week of vacation, and I come back to … this?

COVID-19 cases are soaring again. Inflation fears are running rampant. And the stock market is having a conniption fit.

It reminds me of an old joke my grandfather used to tell: Peat and repeat walk into a store. Peat comes back. Who is left?

Exactly. I swear. I can’t leave you guys alone for a minute.

Now, let’s get down to business.

The talking heads on Wall Street realize the problem: It’s COVID-19. It’s always been COVID-19 … despite attempts to reframe our economic woes as inflationary.

Cases have rebounded significantly due to the delta variant. In fact, the U.S. saw cases rise 70% last week. India reported a record 41,000 new cases in one day this weekend. The supposedly secure Olympic Village in Tokyo now has three active cases.

“Consumer concern about inflation as well as a rise in new cases of COVID-19 among vaccinated Americans could weigh on consumer sentiment in the coming months even as employment and incomes grow as the economy re-opens,” said Oppenheimer Chief Investment Strategist John Stoltzfus.

Perfect timing, John. Calling for consumer sentiment to fall just as the latest University of Michigan consumer sentiment index dropped from 85.5 in June to 80.8 in July. The thing is, however, consumers are still spending, despite complaining about high prices. Remember, June retail sales rose by 0.6% while economists expected a decline of 0.4%.

And yet, while the consumer confidence index showed that 33% of consumers think that now is a bad time to buy — the highest such reading dating back to 1960 — they’re still buying. We can thank government rescue funds and higher wages for this economic cushion.

Now, a lot has been said about the transitory effects of inflation. Heck, I’ve personally said a lot about transitory inflation. And it’s true. Production and distribution will stabilize. Prices will normalize, and this entire nightmare will eventually be behind us … at least, as long as COVID-19 eventually goes away.

And therein lies the rub. Right now, all signs point toward the unvaccinated as the major driver for this resurgence. 99% of all COVID-19 related deaths are among the unvaccinated.

If COVID-19 doesn’t go away, central banks will be forced to pump more funds into the system, and pandemic lockdowns could return.

In other words … if you don’t like inflation, you want the U.S. economic recovery to continue and you value your portfolio … I don’t know … maybe, go get vaccinated or something? Just a thought.

On a final note, do you wanna welcome me back? Praise the Great Stuff Team for a job well done in my absence, or just lay into me over vaccines, inflation and COVID-19? (I know more than a few of you do.)

Well, then email me at [email protected] and let me have it. I’m a big boy. I can take it.

Editor’s Note: This Could Be The Stock Of A Lifetime

One tiny tech company — still nearly unknown to Wall Street — is setting up to be a bigger story than Tesla, Zoom or PayPal have been in the last year.

This company is at the forefront of an industry that is growing incredibly fast — faster than electric vehicles, wearable tech and even the Internet of Things. This company’s growth is already at a breakneck pace, with sales and cash reserves doubling in the last year. 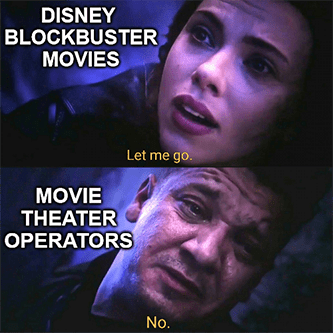 I talk a lot about “narratives” in Great Stuff. Narratives drive sentiment, which, in turn, drives stock valuations. Whoever sets the narrative first (or the loudest) usually wins in the court of public opinion.

The Mouse’s House just released its latest Marvel blockbuster film, Black Widow. The movie set pandemic revenue records, bringing in $80 million in the U.S. and Canada in its opening weekend.

What’s more, Disney said that the Scarlett Johansson-led movie raked in another $60 million worldwide on Disney+.

But movie theater operators are calling the movie a bust. The National Association of Theatre Owners, aka NATO — seriously? NATO? — praised Black Widow, calling it “such a well-made, well-received, highly anticipated movie.” However, NATO also rolled out this little gem:

Despite assertions that this pandemic-era improvised release strategy was a success for Disney and the simultaneous release model, it demonstrates that an exclusive theatrical release means more revenue for all stakeholders in every cycle of the movie’s life.

In other words, Black Widow may have been a success for Disney, but movie theaters got bupkis.

Furthermore, as part of its anti-Disney+ narrative, NATO said that without the simultaneous release model, Disney could’ve made $92 million to $100 million in Black Widow’s initial weekend. Therefore, says NATO, the movie was a bust.

The bottom line here is that the Disney+ model is working as intended for Disney … not so much for companies like AMC Entertainment (NYSE: AMC). But that hasn’t stopped NATO’s narrative from sinking DIS stock about 3% today.

If you want to get in on our Great Stuff Picks recommendation on DIS stock, or add to an existing position, now is a good time to pick up a few shares amid this sell-off. 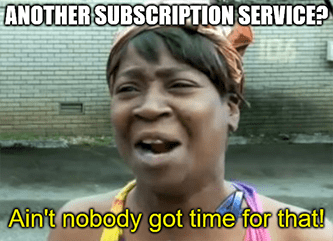 I don’t know about you, Great Ones, but I’ve about hit my subscription limit — Disney+, Netflix, Amazon Prime, Crunchyroll, Hello Fresh, etc.

The list has become unwieldy at this point, as I’m sure many of you have also realized.

Over the weekend, Tesla announced that instead of paying $10,000 upfront for its Full Self-Driving package, customers would now be able to pay $199 per month for the service.

Just what you wanted, right? A subscription service for your car. And we’re not talking Sirius Satellite radio here — we’re talking a potentially critical safety feature.

If that wasn’t enough, some Tesla drivers — particularly drivers of older models — might have to pay an additional $1,500 to have a chip installed to even use the Full Self-Driving package.

Sounds like Tesla needs to up its game in Western markets because it’s about to have quite a fight on its hands in China. 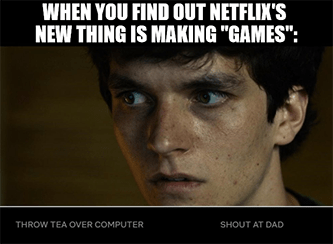 What did I just say about subscription fatigue? Don’t lie, if the budget comes down to keeping a self-driving Tesla and streaming Netflix (Nasdaq: NFLX) … well, Netflix is getting the cut.

The big red streamer has floundered with the original content limelight for some years now.

Say what you will, for all the Netflix Original programming you may personally dig, the streaming competition is tougher for Netflix now. It’s not holding a candle against the Mouse.

Netflix knows that, so instead of fighting over an increasingly small slice of the video content cheese, Netflix might be onto the next big thing (for once).

The rumors are true: Netflix will soon offer game-streaming in addition to its video content. The only problem I see there is … where’s Netflix getting these games?

That’s where this gets even more interesting. Netflix will develop its own games. Because one “original content” problem was not enough, no, let’s go up against literally every other major game developer out there and hope this streaming ability sells enough people.

Ooh, better yet: Let’s not even make “video games.” Pshh, that’d be so pedestrian. Netflix plans to “create new types of stories and new product experiences,” which just sounds like Black Mirror Bandersnatch to me.

Netflix also noted that it won’t charge extra for whatever “interactive experiences” it develops, but my mind can’t help but add “… for now” to that.

All this leaves me to wonder: Why? Why does Netflix toy with my emotions like this?

Does Netflix think people want game-streaming so much that it will keep them paying Netflix’s ever-increasing subscription costs? What happens if no one likes whatever ephemeral digital experience Netflix develops? Can it afford to pay the rights to stream other games? Like … actual video games?

Besides, you can’t just promise a whole new field of content, throw a few job postings onto Indeed.com and create a new game development studio from scratch. Bloomberg puts it best, surprisingly: “They don’t have a team, they’re not capable of making games, and the idea that they think they’re gonna launch games next year is crazy. There’s no chance they get anything made in the next year.”

We might as well declare that our new “Quote of the Week.” Enough said.

It’s Monday, Great Ones — time for a new Chart of the Week and a freaky fresh crop of earnings.

We told y’all last week that earnings season is about to hit overdrive — just look at how packed this week’s earnings slate is! Here’s the week in earnings, straight from EarningsWhispers over on Twitter: 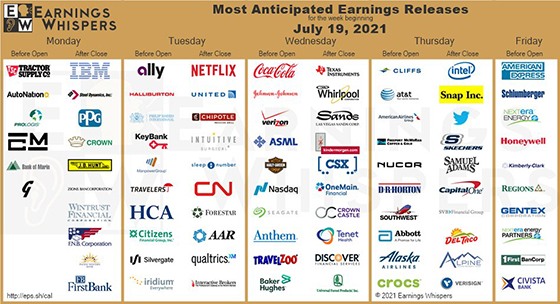 Of course, we have the usual slog of credit and insurance companies to wade through to get to the goodness. Sorry, American Express and Anthem, but I’d rather trudge through the airlines’ reports instead … and that’s saying something.

All the big-name airlines are following in Delta’s (NYSE: DAL) wake this week. Here, we’re looking for a few things: How many people are flying these days — and on which airlines? We shouldn’t expect every airline to roar back equally from their cash-burning, thumb-twiddling quarantines…

Oh, and what about guidance? Are the airlines expecting travel to slow down with COVID cases increasing? Maybe they should expect the worst, just to be safe.

Pandemic paranoia aside, what else is shakin’ on the Street this week? How about hydrogen picks? Yup, got ‘em: NextEra Energy (NYSE: NEE) reports on Friday. Chipmakers? You bet — Intel’s (Nasdaq: INTC) ready to disappoint us once again on Thursday.

Consumer-facing stocks? The week’s chock full of them, starting with Johnson & Johnson (NYSE: JNJ). For my vote, I’m watching Honeywell (Nasdaq: HON) since it makes pretty much everything under the sun, from aerospace equipment and health care products to safety protection gear.

Though, I’d reckon its fan and portable AC sales won’t be chump change either for the foreseeable future. I hope you Great Ones are staying cool out there … or trying to, at least!

Congratulations, Great Ones! It’s the day y’all have been waiting for: Hyzon Motors starting trading on the Nasdaq today under the ticker .

Your Decarbonization Plus Acquisition — formerly DCRB — shares should change over to Hyzon shares shortly if they haven’t already. This merger is a go!

I’m watching the stock today to see how the market reacts to this sucker, and I’ll let you know what’s up with it in tomorrow’s Great Stuff. A few of you have asked about the stock leading up to this merger date, and we’ll get to those questions promptly … tomorrow!

In the meantime, why not stop by our inbox and share your thoughts with us? Whatever you feel like sharing — market-related or otherwise — drop us a line at [email protected].

In the meantime, here’s where else you can find us: