Home Daily Hot Picks Can You Afford Not to Own Some Bitcoin?

Satoshi Nakamoto began writing the code for it in 2007. Today, this more than decadelong project is on fire.

And whether you believe it’s God’s gift to money or a mania waiting to unwind, you have to admit bitcoin can go higher.
Don’t you?

Some Dislike Mexico … Not Me

There are some innate — maybe even deep-rooted — components to the demand for bitcoin. Some of them are very personal to me…

The stories my Mexican colleagues shared with me about the angst just a few years before I arrived are ones you need to hear.

People from more developed countries may not have experience with this. (Or they may not think they do.)

But this is what my friends lived through…

On December 20, 1994, the Mexican central bank devalued the peso.

Two days later, the government allowed the peso to trade freely in the market. It then fell another 15%.

The value of the money Mexicans held in the bank and in their wallets was worth 30% less!

Imagine if the car you were looking at doubled in price … in an instant. Or jeans. Or if the stuff you regularly imported became less available.

That’s what my friends endured, through no fault of their own.

And I’m afraid that doesn’t only happen in Mexico.

And these events are often preceded by statements like this:

But none of these citizens chose for this to happen, and few materially contributed to it.

So, if you live in any of these countries, why wouldn’t you own some bitcoin?

Or if you live in a country that has seen a big drop in purchasing power?

Just in case. As a way to transport at least some of your wealth to start a new life.

It’s Not Easy for Spoiled Westerners to Appreciate This

And I find that strange.

I’ve shown you before in these pages that the U.S. dollar has depreciated more than 90% since your grandparents were born.

Those aren’t my numbers. They’re from the Federal Reserve:

That’s the purchasing power of the dollar since 1933.

It makes sense to consider where you put your money.

And even if you’ve always put your savings in the same places, that doesn’t mean adding one more place to the mix is wrong.

Listen, there are some things you need to understand.

Bitcoin has risen a lot over the past few months. 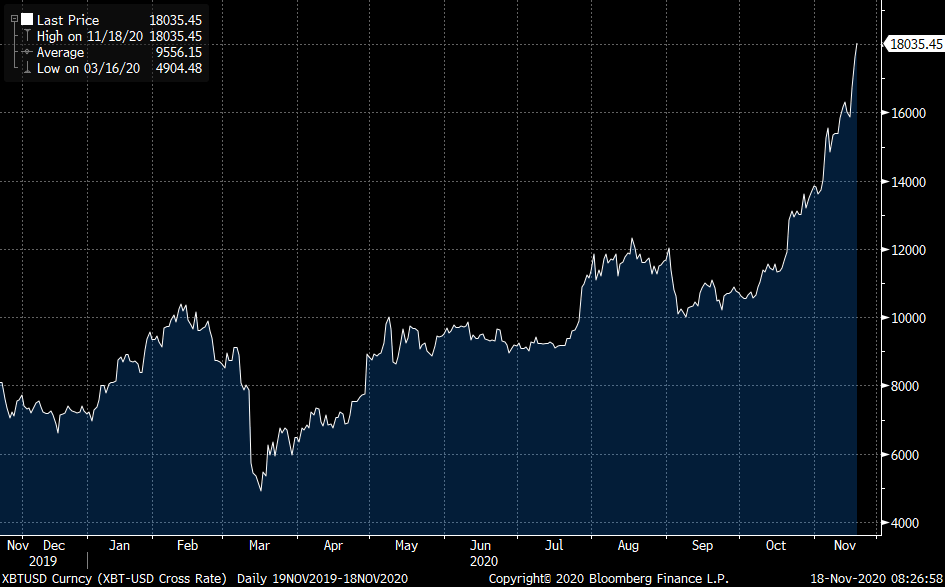 You should expect a hiccup in this uptick.

In fact, bitcoin could even fall over the near term.

But ask yourself: Why is this happening?

It has been volatile.

Today, the narrative has changed.

More and more, the people of the world are recognizing that their governments aren’t out for their best interests.

Politicians want to win elections. They aren’t worried about maintaining the purchasing power of their currency.

Bitcoin has maintained its value, though. Even after that huge drop!

Right or wrong. Good or bad. Add whatever narrative to the story.

That is what happened.

And the reason has to do with certainty. If your government can lop a zero off the value of your currency or print as much as it wants, saving in that currency isn’t as attractive.

Bitcoin is benefiting today from the power — and the beauty — of scarcity.

Today, more hedge funds realize bitcoin is a store of value. We have seen incremental growth in demand.

And there should be.

Only one person can own the real “Mona Lisa.” Only a few can own the Topps Mickey Mantle rookie card.

And you can still own bitcoin.

And while it can and will fall, it still makes sense to own some.

In a world where your leaders aren’t taking care of you, look to yourself.

We Want to Hear Your 2021 Predictions