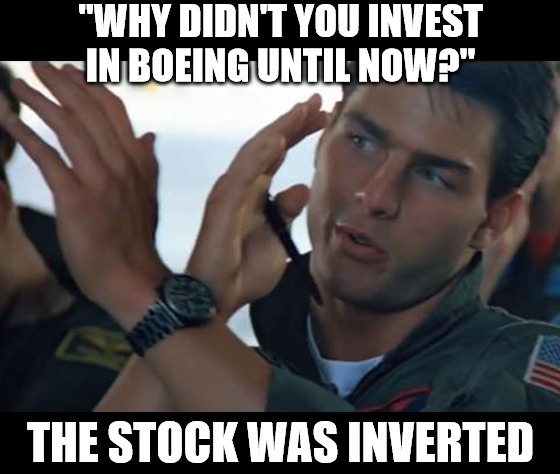 So, Great Ones, are you ready to jump off the deck and shove it into overdrive?

Mr. Mister into Kenny Loggins? Bah. Give me Ozzy!

BA stock is flying high again after the Federal Aviation Administration (FAA) cleared the 737 MAX to take to the skies once again.

The highway to the danger zone is officially closed — unless you have to travel through Cincinnati, that is. But then, that’s a different kind of “danger zone.”

Here’s an excerpt from the agency’s official statement:

The design and certification of this aircraft included an unprecedented level of collaborative and independent reviews by aviation authorities around the world. Those regulators have indicated that Boeing’s design changes, together with the changes to crew procedures and training enhancements, will give them the confidence to validate the aircraft as safe to fly in their respective countries and regions.

Furthermore, FAA Administrator Steven Dickson said he was “100% confident” in the 737 MAX.

I can almost hear you say: “That’s all fine and dandy, but what about the fact that hardly anyone is flying during the pandemic?”

Well, this news isn’t about the here and now. It’s about the future.

With the FAA’s clearance, Boeing can ramp up 737 MAX production rates again to meet existing and future orders. The pandemic won’t be around forever. Demand for airplanes will rise again, and Boeing’s path forward was just cleared.

Furthermore, BA stock trades for half its March 2019 highs. With the company back on track and the end of the pandemic tunnel now in sight … that’s a lot of potential upside for investors.

That sounds like a buy recommendation, Mr. Great Stuff!

Not just yet. I’ve got a little more digging to do.

And I want to see if this short-term strength holds amid rising COVID-19 concerns. But don’t be surprised if Great Stuff Picks pulls the trigger on BA soon. *Shirtless beach volleyball scene not included.

But you know we never leave you (or your portfolio) empty-handed ’round here. No siree! No matter how this pandemic winter plays out…

Our friend Adam O’Dell found a way to not only protect your money … but to make enough to help you ride out whatever happens. It’s a special kind of investment that’s on the cusp of a HUGE growth phase despite the turmoil engulfing our country. In fact, it could even do better the worse things get.

Read this here to find out how! 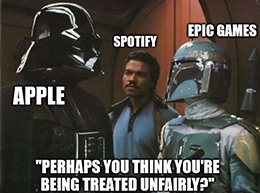 So, Apple Inc. (Nasdaq: AAPL) announced a thing today that should’ve made a lot of people happy.

It didn’t. Not investors. Not developers. And certainly not outspoken Apple critics Spotify and Epic Games. What did Apple do?

It announced that it will cut App Store commissions for small developers by half — from 30% to 15% — starting this January. Developers making less than $1 million in annual revenue are eligible for the 15% commission rate.

CEO Tim Cook played up the altruistic nature of the move: “We’re launching this program to help small business owners write the next chapter of creativity and prosperity on the App Store, and to build the kind of quality apps our customers love.”

But Epic CEO Tim Sweeney wasn’t having any of it, noting: “By giving special 15% terms to select robber barons like Amazon, and now also to small indies, Apple is hoping to remove enough critics that they can get away with their blockade on competition and 30% tax on most in-app purchases.”

Developers not happy? Check. What about investors?

Well, according to research firm Sensor Tower, this new App Store policy will apply to 98% of developers. Those developers accounted for less than 5% of App Store revenue in 2019, but it still means less revenue for Apple.

As a result, AAPL shares initially opened more than 1% lower before recovering alongside the broader market. 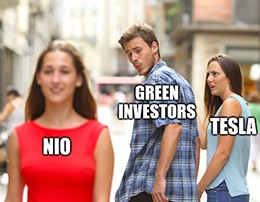 What is competitive, though, is the quarterly report that Nio Inc. (NYSE: NIO) just put out.

Much like looking at my bank account after a Steam Store sale … the losses were better than expected, with Nio losing $0.14 per share to beat expectations for a $0.20 per-share loss.

Revenue shot up 146% to $666.6 million, whereas analysts expected $664 million. But despite the double beat, Nio sank about 6% today before rallying to break even.

Oh, it’s gotta be because of that earnings-per-share loss! Am I right?

Not quite. No one really expects Nio to actually post profits yet — that’d be positively preposterous. Besides, China wouldn’t let Nio actually go broke-broke. Remember, that’s one advantage that the Chinese Tesla-killer has over, well, Tesla Inc. (Nasdaq: TSLA).

Nay, today’s sell-off was mere profit-taking. NIO’s rallied over 1,070 % since just summer — wouldn’t you get off Mr. Toad’s Wild Ride by now?

Realistically, any further selling in NIO could be a buying opportunity if you’re not in already. What long-term investors saw in the company’s report was the impressive delivery growth for Nio’s vehicles.

Not only did Nio increase orders over the second quarter by 18%, it more than doubled deliveries year over year. The company delivered 12,206 vehicles last quarter, compared to 4,799 vehicles this time last year … in spite of the pandemic … despite supply chain issues and manufacturing hiccups and slowdowns.

Best: Hydrogen Is the Bomb 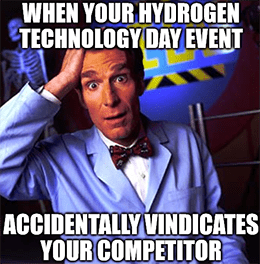 Any Great Ones out there wondering why NKLA surged 16% today?

If you are, then you should probably go and read the October 1 issue of Great Stuff titled “Hydrogen: 3 Stocks for an $11 Trillion Market.”

On Monday, diesel engine giant Cummins Inc. (NYSE: CMI) hosted a hydrogen technology day for investors and analysts. The critical takeaway? Hydrogen power is the future of green energy, and Cummins is backing it in a big way.

Cummins highlighted its fuel cell and hydrogen production technology for investors at the event, noting that “hydrogen provides a pathway to store energy from renewables.”

CMI stock rose more than 2% today as news of the event trickled out onto Wall Street. But why did NKLA shares skyrocket?

Because Cummins’ data for the hydrogen economy closely matched figures that Nikola is constantly derided over. In short, the Cummins hydrogen day event all but vindicated Nikola’s business model.

There’s just that little “fraud” thing involving former CEO Trevor Milton left to overcome now. The bottom line here is to keep both CMI and NKLA on your short-list for possible investments to take advantage of the coming hydrogen boom.

This year has me paranoid when things get a little “too quiet.”

But when it comes to the Great Stuff mailbag (a bit light this week, mind you), I just know that means a torrent of tidings is just waiting to drop.

Hit us up at [email protected] with any questions, ideas or feedback you have on your mind! We love hearing from you all — your trades, your pandemic prep (or lack thereof) and your best Mr. Great Stuff impressions — it takes all kinds here.

If you haven’t written in yet, what’s stopping you?

But just remember: Email is only one way to get in touch with us. If you haven’t answered any of our past Polls of the Week, you’re in luck! We’ve got a fresh one on tap.

This week, we want to know what you’ve been up to while Wall Street went head over heels for the vaccine race.

Did you dump your stay-at-home picks (think Zoom and Netflix) when news of the Pfizer vaccine dropped? Or are you still knee-deep in your pandemic plays?

Either way, we want to hear more from you after you vote — the “why’s” behind your “what’s,” if you will — so write to us at [email protected] with all those cunning thoughts of yours.

We’ll circle back on this one next week! And we’ll start unraveling our Möbius strip of an inbox right here tomorrow. So until next time, stay Great and check us out on social media: Facebook, Instagram and Twitter.