Bitcoin broke through $24,000 on Christmas Day.

Some said that was even better than getting snow.

But it didn’t stop there.

From its low in March to that recent high, the cryptocurrency jumped more than five and a half times!

There are still lots of people who doubt the price of this asset. That’s fine.

But there’s something about it that you shouldn’t doubt…

Coinbase is the largest crypto exchange in the U.S. It is one of the outlets via which normal investors can buy cryptos (and institutions, for that matter).

A lot of investors. It has more than 35 million users who live in more than 100 countries.

It allows customers to buy, sell and manage crypto assets. And setting up an account is easy.

In the U.S., you link it to your bank account. There are setups for each country. That ease is part of its success.

Here is how much it has grown since its founding in 2012: 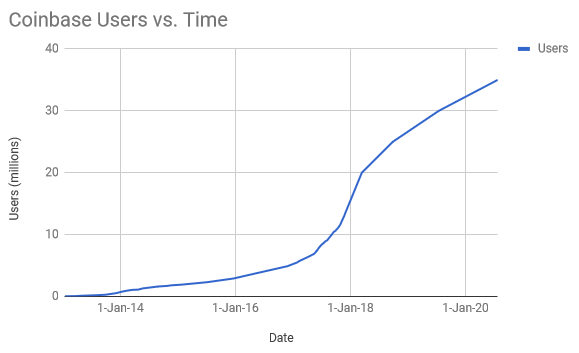 Of course, Coinbase’s user growth isn’t proof that bitcoin will rise in price from current levels. But I believe it is a strong sign that bitcoin and cryptos are here to stay.

Coinbase launched its service in October 2012.

It grew to 1 million users in 2014. With more than 30 times that today, it can’t evade the government.

The company provides detail of your trading activity to the IRS, just like E-Trade and other online brokers.

But that’s what you should want. Regulation allows markets to grow.

Buying and selling cryptos on Coinbase is not a way to avoid taxes. But that “above the law” aspect hasn’t stopped people from using the service.

On December 17, Coinbase filed its Form S-1 with the Securities and Exchange Commission (SEC). This is the form a company that wants to go public must create and submit.

The SEC is now reviewing the initial public offering. (And when it’s available, we will too.)

Coinbase will go public next year. And the market is antsy.

Futures exchange FTX has valued Coinbase at as much as $80 billion. As I write, it’s closer to $63 billion.

Still, this is a huge sum given this exchange was founded less than a decade ago. And it only raised $550 million from third parties.

But the popularity — and the proposed value — stem from where we are today.

Central banks are flooding the world with cash, with no plans to quit in the near future.

Prominent investors such as Paul Tudor Jones, Stan Druckenmiller, Bill Miller and many others have endorsed bitcoin.

That gives the space more clout. That didn’t happen during bitcoin’s last peak three years ago.

The Shift to a New Way of Money

People want bitcoin and other cryptos … and they’re getting them.

Now you can buy them on PayPal, Square and Robinhood, too. That strengthens the demand picture. These firms compete with Coinbase to help you transact in crypto.

Retail and institutional investors alike are “in.”  The more people who transact or save in crypto, the more the world needs their services.

Coinbase is going public at the right time.

No doubt, its price will reflect that excitement, as the price of bitcoin does today.

More important, though, is the shift taking place. The shift to a new way of money. Don’t doubt that.

The Biggest Disruption Since the Automobile

The Surprise Reason Inflation Could Rock Your Stock Portfolio