Long before Amazon.com and Walmart dominated the retail landscape, there was Montgomery Ward.

This long-forgotten company came up with the catalog more than a decade before Sears, Roebuck & Company — now known as Sears.

Montgomery Ward was one of the world’s largest retailers before the Great Depression.

Its chairman adeptly navigated through the Depression. But after that, he allowed his opinions to interfere with sound business planning.

His oversight is an especially timely lesson as the 2020 election nears — since these events can often cloud investment decisions.

Click here to learn how the downfall of this massive retailer can make you a better investor today.

The Fall of Montgomery Ward

When retail giant Montgomery Ward went bankrupt in 2000, analysts attributed the company’s demise to decisions made in the late 1940s.

According to The New York Times: “Retail historians date the start of the decline to the postwar boom of the 1950s, when its rival, Sears, Roebuck & Company, moved aggressively into the then nascent suburbs, while Ward, under the steely leadership of its then chief executive, Sewell Avery, hoarded cash and waited for a second Great Depression.”

Avery survived the Depression. He halted expansion. He built up cash reserves to survive the decline.

His strategy worked. But he became permanently bearish.

The chain never recovered from his pessimism.

When You’re Always Bearish, You Lose

They focus on the last decline. They raise cash. They never find the right time to buy.

It’s easy to be a bear. I could list dozens of reasons stock prices should fall.

Bearishness comes easy. Investors are comfortable expecting the worst. And many expect bad news next month.

As the election nears, our biases increase. Many believe that elections change everything.

So, in early November, they believe stocks will make a big move. This belief carries big risks.

If the market action defies expectations, many investors stand aside.

You may know investors who missed the strong rally in 2016 because they believed stocks would crash if Donald Trump won the election.

Instead, stocks soared the day after election. That rally is shown in the chart below:

Stocks Rallied After the 2016 Election 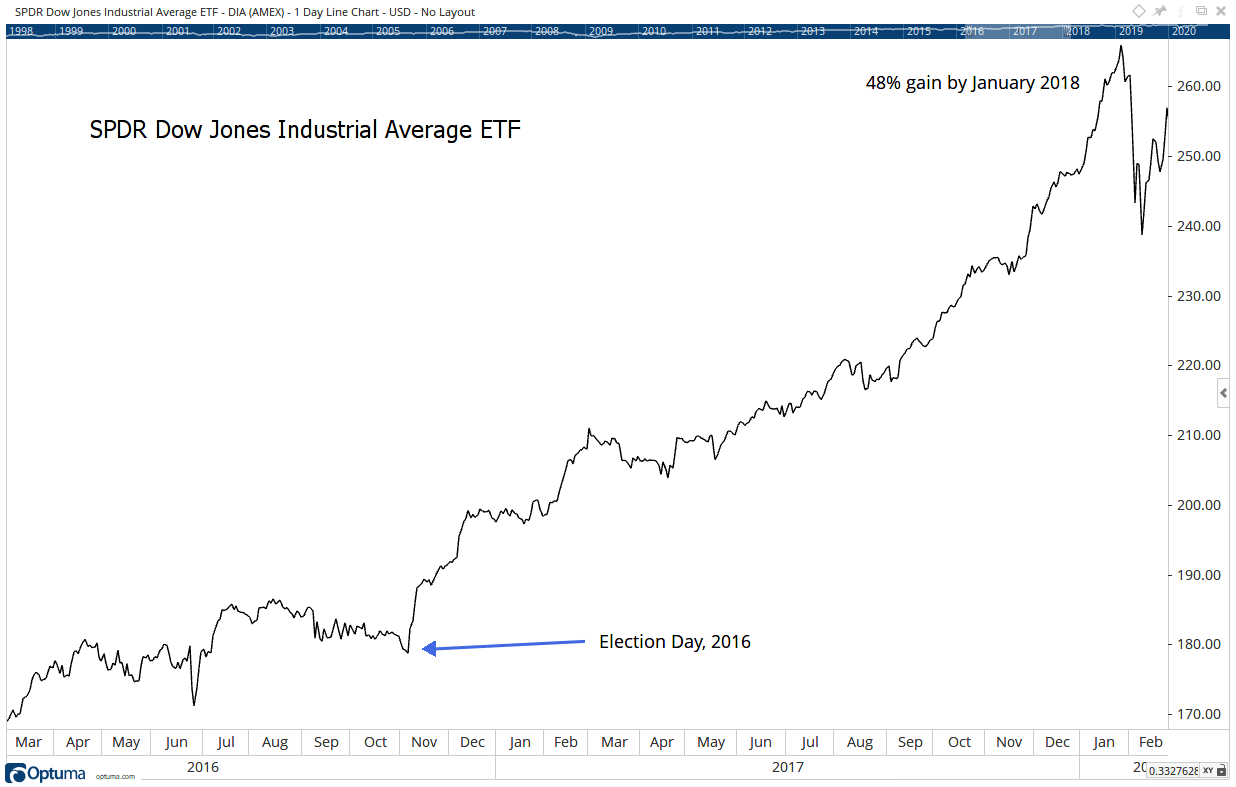 Despite immediate gains, some investors insisted a crash was coming.

They remained bearish. And they missed large gains.

This wasn’t the first time markets defied expectations. And it won’t be the last time.

How to Make Money in Any Market Condition

To overcome the fear of decline, a short-term focus can be helpful.

Short-term traders aren’t thinking about what will happen after the election. They are trading the market they see this week.

This may go against long-held beliefs about investing. But my One Trade strategy is up more than 89% since the beginning of the year.

These gains are in an account that Banyan Hill trades for charity.

We only hold positions an average of two days. So, we don’t focus on earnings, interest rates or elections.

We simply focus on making money.

This simple, short-term strategy could have saved Montgomery Ward. Find out how you can navigate any market condition with this strategy by clicking here.

1 Stock That Stands Up to the Stormy Market