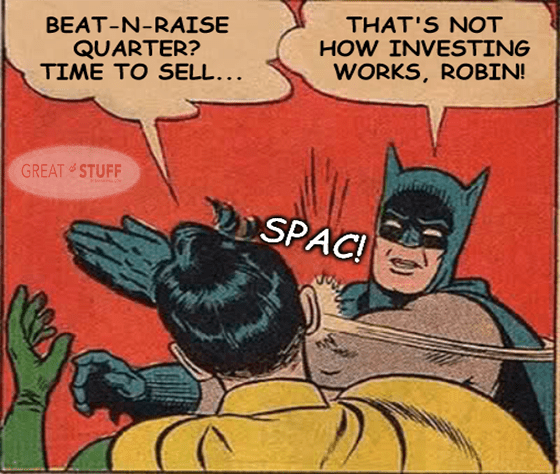 They’ve got to (bump bump) get away from the fear the market drives into the heart of investing. The gains they fear will seem to go nowhere, and they’ve lost their sight … they toss and turn and can’t sleep at night.

Everyone have “Tainted Love” by Soft Cell in their heads now? You’re welcome.

Today, we have another lesson in tainted love … this time between Wall Street and Microsoft. It’s a tale as old as time — or at least as old as 2020:

Company reports blowout earnings across the board.

This is the 2020 two-step … the tainted love relationship between skittish investors and a stock market that continues to look like it’s about to hit a top. But, Great Ones, you don’t have to run away (bump bump) from Microsoft. You may think Wall Street is just about short-term gains … but I’m sorry, I don’t play that way.

OK, let’s get on with it before we spark an impromptu rave!

Gotcha. Microsoft killed it this morning. Literally killed it. The world’s largest software company reported fiscal third-quarter earnings of $1.95 per share on revenue that jumped 19% to $41.7 billion. Both figures handily beat Wall Street’s targets. But that’s not all…

Microsoft also beat analysts’ targets across the board for “Productivity and Business Processes” revenue (up 15%), “Intelligent Cloud” revenue (up 23%) and “More Personal Computing” revenue (up 19%).

And if that wasn’t enough, Microsoft placed current-quarter guidance for all of these business segments above Wall Street’s targets. And yet … MSFT fell as much as 4% following this stellar news.

Baby, baby … where did our love go? — Microsoft, probably.

The thing is … this volatile market has investors taking profits where and when they can, whether they should or not. I’ve said it time and time again: Microsoft is one of those investments you just don’t sell. It’s one of those companies that emerged from the fires of recessions and market crashes past stronger and more profitable than before. The same will happen after the pandemic.

So, Great Ones, after today’s sell-off on a beat-and-raise quarter, I’m watching MSFT for an entry point for a long position over the next month or so. If the shares drop to the $245 to $250 area — home to MSFT’s February highs — it’s go time.

Don’t be surprised if I officially recommend buying MSFT in Great Stuff Picks before the end of May.

You need to watch this video as soon as you can.

In the first 30 seconds, you’ll discover a little-known technology that’s set to drive the greatest investing mega trend in history. According to experts, “Imperium” is set to go from virtually unknown … to having 2 BILLION users in the next four years, launching a stock market “gravy train” almost nobody sees coming. 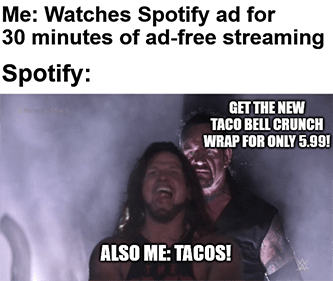 By now, I think Wall Street just likes to give Spotify (NYSE: SPOT) a hard time — it can’t win for losing.

They may talk about Spotify cold when it was headed for the skies. When user growth was ramping up, earnings and profit concerns were the main griping point. But Spotify was young and bold, and those concerns changed with a blink of your eye.

Now, no one’s talking ’bout those crazy days gone by — Spotify posts “a rare profit” in its latest report, and it’s all about the subscriber growth.

Spotify’s monthly active users rose 24% year over year but still paled by Wall Street’s expectations, and even worse, the company had the absolute gall to mention slowing growth for the rest of 2021. Now, it only expects to have between 402 million and 422 million subs by year’s end, compared to its previous estimates of between 407 million and 427 million subs.

So, here’s the thing. Like Netflix (Nasdaq: NFLX), Spotify is now at the advanced-streamer stage, barely adding subs amid growing competition from Big Tech. Yet, Spotify’s still barely eking out any real growth on the financial front, either. This quarter, revenue only ticked up 16% year over year, and that’s down 1% from last quarter’s revenue.

I’m just wondering how Spotify makes more money from here on out. Rather than reinvent chat lines like Clubhouse, it’s not like there are any real revolutionary features out there for music streaming. What will make more people want to subscribe to Spotify? I like the company, and it’s arguably the top music-streaming service out there.

But what’s next? How does Spotify grow now? Curious minds want to know. 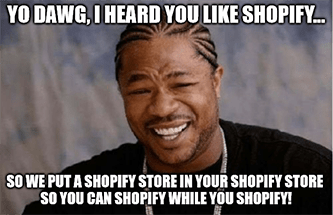 Shopify (NYSE: SHOP)! You’re gonna make your fortune by and by.

The company is right at the forefront of retail’s move online (finally!), and if you need another bout of earnings box positivity, Shopify will have you lose your mind.

Online shopping, pandemic boredom, super doses of stimulus … you can imagine how well the e-commerce expert did last quarter.

Shopify’s also benefitted from the negative press surrounding Amazon (unionizing rights, employee representation, yada yada). There isn’t really a direct competitor to Amazon, so consumers are looking for direct sales from the companies they like, and it’s paying off big for Shopify.

I think it’ll be a long time before Shopify sees a real slowdown in any part of its business. Someone would have to come along and disrupt their model with something quick, easy and do-it-yourself … and I don’t see that happening anytime soon.

Indeed! They’re all part of a booming new industry Charles Mizrahi calls “SoE.” And since the pandemic, SoE has started to soar. He expects it to reach $2.7 trillion within the next decade … and the No. 1 SoE company leading the charge is ripe for the picking.

“In Su We Trust” is probably tattooed on every diehard Advanced Micro Devices (Nasdaq: AMD) bull. And why wouldn’t it be?

Since Lisa Su took over in October 2014, AMD went from $3 territory to all-time highs near $85. Today, AMD looked to climb even higher after the company posted yet another blowout fiscal quarter.

Earnings skyrocketed 242% from $162 million last year to $555 million in the first quarter. Earnings per share arrived at $0.52, blowing past the Street’s target of $0.44. Revenue spiked 92% to $3.45 billion, also putting the consensus estimate to shame.

AMD also boosted full-year guidance, with revenue now expected to rise 50% over last year — up from prior guidance for a 37% gain.

In the first quarter, data center product revenue more than doubled year-over-year and represented a high teens percentage of our overall revenue. We expect data-center product revenue to grow significantly as we go through the year driven by our strong pipeline of new cloud, enterprise and [high-performance computing] wins.

I like Intel. It’s a solid, stable company that will hold up over the long run. However, AMD just has so much more room to grow … and it shows. That’s the advantage of being the underdog for so many decades.

If you’re a Great Stuff Picks reader — and you bought AMD when I recommended it back in June 2019 — you’re sitting on a gain of more than 189% with AMD right now. But if you didn’t get in back in the day, it’s not too late. AMD still has plenty of room to run, as last night’s quarterly report shows.

If Lisa Su can follow through on her promises to work closely on supply chain issues, I see no reason why AMD won’t top $100 before the end of 2021.

It’s poll day here in Great Stuff land! Your day to chime in and make sure your voice is heard among the masses … until tomorrow’s edition of Reader Feedback at least.

So, once you answer our poll, send us a quick “howdy!” to [email protected] and share all those thoughts that a mere poll cannot satisfy.

Last week, we asked for your thoughts on medical robots — the surgery-assisting kind, not any scalpel-wielding robo-rampages.

Anyway, you Great Ones were pretty evenly split about supporting our new robot surgeon overlords. About 55.3% of you have invested in medical robots, while the other 44.7% of you have yet to help spark the robot uprising.

Oh, and thanks to all y’all who shared your thoughts on going under the roboknife! Now, for something entirely different: nonfungible tokens (NFTs).

We’ve mentioned (read: ranted on) NFTs in passing here in Great Stuff, and while I’m down with the whole crypto space, NFTs continue to befuddle and bemuse me … and somewhat amuse me.

Supported by the blockchain, nonfungible tokens are like little digital seals of authenticity on whatever virtual thing you’re buying, whether that’s a single “autographed” tweet, random art videos and … old-school memes.

Now, I giggled when the Kings of Leon released an album as an NFT (and we both know that was bound to be the only memorable part). I chortled when Great One Katie H. cued us to the virtual pet rocks you can buy for tens of thousands of dollars. 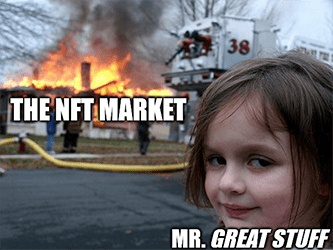 But now I’m just shaking my head as “disaster girl” sells her meme as an NFT, cashing in on what’s undeniably reached crypto craze status.

Like a reunion of Recession-era image macros, the now-21 Zoe Roth consulted other viral meme subjects, including Overly Attached Girlfriend and Bad Luck Brian, before selling the NFT for $430,000 at auction.

To sum up: That’s $430,000 for the “girl smiles at house fire” meme. An “original” meme, at that. Never mind that you can right-click, hit “save as,” and have the meme for yourself. This is a literal digital image we’re talking about here … not some impossible-to-reduplicate marble sculpture or a slice of cake from the wedding of Edward VIII.

I’ll leave you to judge whether or not this is the future of fine digital art as some claim (or tell themselves) … or if the NFT mania is getting ahead of itself.

In fact, decide for yourself right here, right now. Click below and tell me what you think:

Got more thoughts? Lemme hear them all! [email protected].