Warren Buffett is known for his pithy guidelines to playing the stock market.

One of his best-known — though hardly original — is “buy low, sell high.”

But how do you know when the market is “low” or “high?”

The Oracle of Omaha has an answer to this one, too. Appropriately, it’s called the “Buffett Indicator.”

It’s simply the cumulative market capitalization of all listed U.S. companies as a percentage of gross domestic product (GDP).

The chart below shows the Buffett Indicator over time, with an exponential trendline. The trendline suggests that “fair value” of the U.S. stock market should be about 120% of GDP.

So by Buffett’s measure, U.S. stocks are extremely overvalued by historical standards.

The problem is that the bond market is useless as an investment vehicle. Yields have never been lower.

But there’s an alternative besides bonds. It’s one that ‘ol Warren himself has chosen twice already this year.

So instead of throwing up your hands and shouting “TINA” (there is no alternative), shift some of your portfolio into assets that aren’t overvalued and have a long way to run before they reach the top…

Put on Your Sailing Shoes

The stock market stars are aligning around a strong prediction: Foreign markets are going to do better than the U.S. over the next decade.

Here’s a chart from leading investment research firm GMO. It shows projections for the returns of various asset classes over the next seven years. 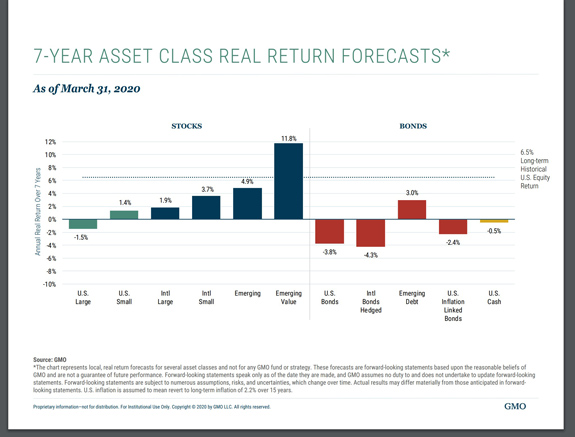 This wouldn’t be the first time that non-U.S. stocks have provided better returns. For most of the 1970s, the latter half of the 1980s and most of the 1990s, foreign stocks returned significantly more than U.S. stocks: 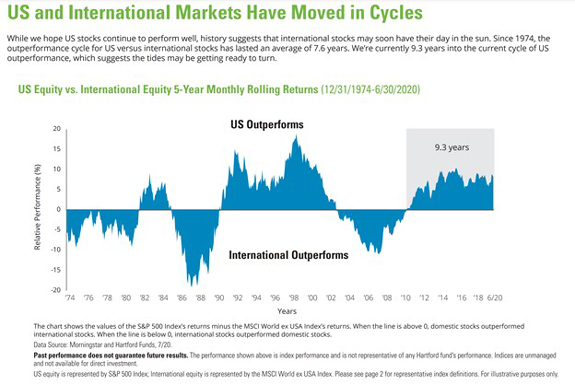 The big difference since the great financial crisis has been that the Federal Reserve’s actions have pushed U.S. stock valuations ever higher.

But as I’ve argued recently, the Fed has done all it can. It’s not going to lower interest rates any further.

That means it’s time to set sail for foreign markets!

But if you strip away those variations, you can measure the raw potential of various foreign markets. We can do that by comparing the current level of a given country’s stock market to what it would be if the following assumptions held:

Based on those assumptions, here’s the potential annualized return from a selection of developed and emerging stock markets: 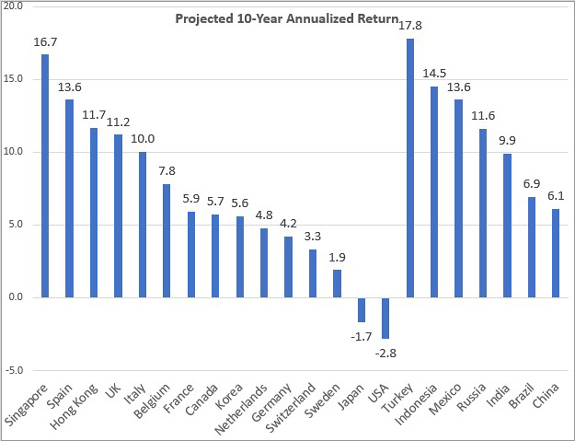 Now, remember that this just shows you what’s possible given historical trends.

Whether these things happen in practice depends on a lot of other variables … including local and global politics, the global economy and the perception of risk … precisely the things that I’ve learned to keep on my radar screen in my years as a global economist.

But the big picture here is clear. The U.S. stock market is at a historical top and is likely to cool off.

Other countries, meanwhile, could skyrocket if they get things right.

Warren Buffett’s Berkshire Hathaway Inc. (NYSE: BRK.A) has made two big foreign investments this year. He knows that the odds are strongly in his favor.

You can play these odds too.

Here’s a selection of some country exchange-traded funds (ETFs) you can add to your portfolio to take advantage of the big move offshore … all of which have outpaced the U.S. stock market (+36.3%) over the last six months:

Global travel may be restricted at the moment … but your portfolio is free to go any time.