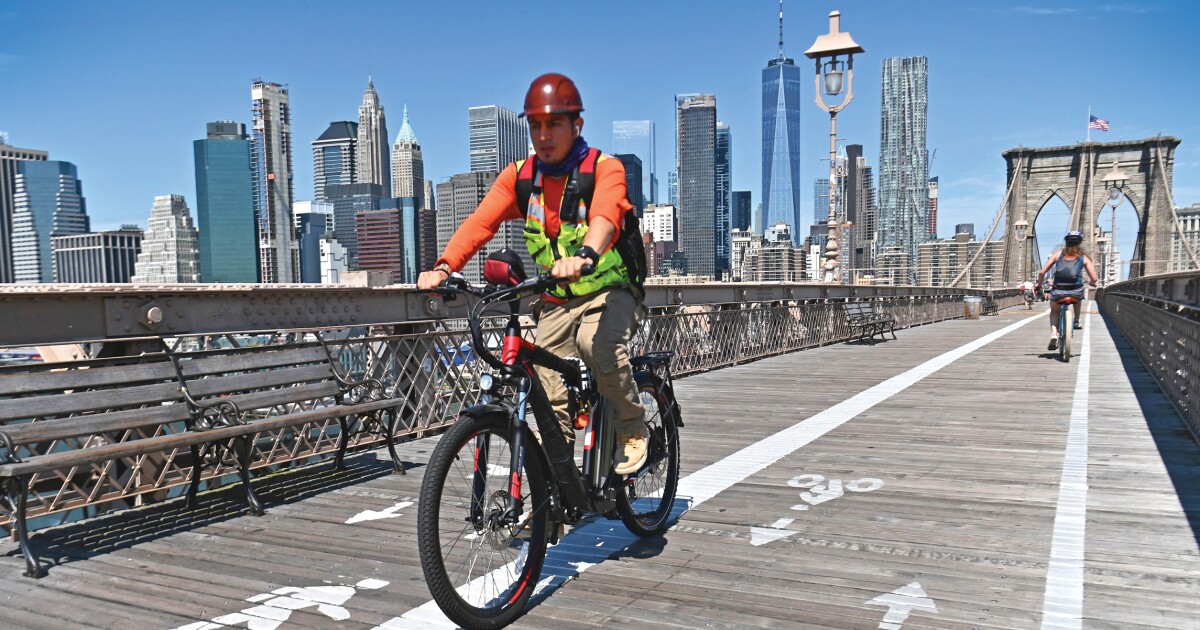 Bicycling is on the rise in America in response to COVID-19. This means more significant bike sales and a greater use of bike-sharing and scooter-sharing apps and programs in large cities.

Russell Murphy is the North America and United Kingdom communications director for Lime, a bike- and scooter-sharing company that operates in cities across North America and Europe. The Washington Examiner asked him if more people in densely populated cities now prefer bikes to public transportation to avoid too close contact with others, potentially infected people.

This changed behavior has created room for business growth. Lime has recently gone back into the Seattle market, for instance.

“We have as many as 1,300 bikes in Seattle right now. The bikes that were there prior were our old Lime bike model. We now operate the JUMP e-bike, following our acquisition of their assets earlier this year in May,” Murphy said.

Emerald City residents can ride JUMP bikes either through a Lime app on their phones or through the popular Uber app. People in many other big cities are behaving similarly to Seattleites.

“Biking is way up in New York City, presumably because people are substituting subway trips for bikes and are trying to get some exercise outside their apartments,” Marc Scribner, a transportation policy analyst for the libertarian Reason Foundation, told the Washington Examiner.

Scribner said he believes this will do more to drive bike sales than to drive the expansion of sharing services. “Shared bikes and scooters tend to support very short trips that depend on people being in city central business districts in the first place,” he explained.

Adie Tomer is a fellow at the Brookings Institution’s Metropolitan Policy Program. He pointed out that travel across the board is not having a great year but made a bike-sharing case, comparatively speaking.

“Like nearly all measures of transportation demand, trips with a scooter and bicycle-sharing services have dropped when comparing 2020 to 2019. However, the largest drops do seem behind us, with the dips much smaller in August than they were in April,” Tomer told the Washington Examiner.

How much are taxpayers paying for all of this? Tomer’s answer is: surprisingly little.

“Most micromobility systems currently receive no direct government subsidies, instead relying on customer payments and internal financial assets, including venture capital investments. Docked bike-share systems, in particular, tend to pencil out their operations through advertising at docking stations,” Tomer said.

“However, sharing companies can receive implicit subsidies by being provided free access to public right of way, most notably sidewalk areas for vehicle parking and docking,” he added.

People are using private and shared bikes and scooters in more significant numbers now, at least relative to other forms of travel. How likely is that to last?

A 2015 survey by Breakaway Research Group found huge potential for bikes in America coupled with limited regular usage. The polling firm found over 100 million people in the United States used a bike at some point in the past year but that only 15% had done so for “transportation.”

Even that number may be considered high. A few years after the Breakaway survey, the business data website Statista reported, “In 2016, around 12.4 percent of Americans cycled on a regular basis.” Statista did note a slight uptick in 2017 and pointed out that the younger demographic’s use was essentially flat.

Yet we’re learning that there’s nothing quite like a global pandemic to upend established habits and behaviors.

“We live in a tumultuous moment for transportation demand of all kinds, not just micromobility and transit service. There are genuine questions about when the nation’s comfort with public interaction will return to pre-COVID levels, if and when people will return to the workplace or patronizing most retail, and whether any changes in demand could be permanent,” Tomer said.