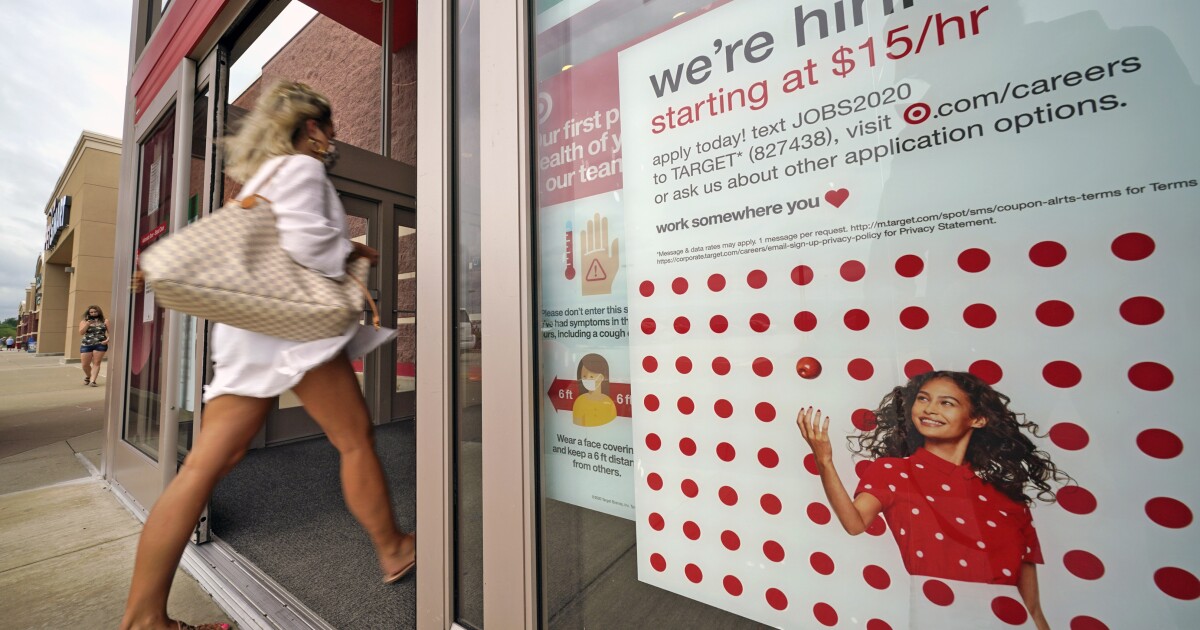 “Food stamps caseloads that were going down are going back up. Food pantries are experiencing a greater demand,” said Andrew Stettner, an economist focused on unemployment at The Century Foundation, a liberal, nonpartisan think tank.

“Many are hanging on by thread in terms of evictions and poverty,” Stettner said. “The lack of unemployment aid is causing a lot of hardship, and people are really struggling to get by.”

Trump, through an executive order in August, made available up to $44 billion from the Federal Emergency Management Agency’s Disaster Relief Fund to provide assistance to workers sidelined by the pandemic in the form of a $300-a-week federal boost to unemployment benefits.

The impetus behind Trump’s executive order on the enhanced payment was Congress’s inability to extend added unemployment benefits, which had been enacted in the March CARES Act at a rate of $600 a week. The boost expired at the end of July.

At least 20 states have already ended their additional $300-a-week unemployment benefits because they have run out of funds from FEMA. The whole program is expected to end soon because almost $42 billion of the $44 billion in aid has already been distributed to the states by FEMA.

In many states, unemployed people have already been forced to make do with the benefits provided by their state government without the federal boost. State unemployment benefits vary, ranging from a $247-a-week maximum benefit in Louisiana to $823 a week in Massachusetts.

Tens of millions of workers are claiming unemployment benefits. Half of all adults who say they were laid off because of the coronavirus pandemic remain unemployed, according to a survey from last month. The White House and Congress are under pressure to provide more relief.

“There’s a need for more unemployment aid because there are 50,000 new COVID cases a day,” said Gbenga Ajilore, a senior economist at the Center for American Progress, a liberal think tank.

“As long as cases are in the thousands, people are going to stay home, businesses are going to suffer, and therefore, we need aid. The virus is the No. 1 thing to be talked about to help the economy and the unemployed,” Ajilore said.

The likelihood of people going out and spending is closely tied to how well the virus is contained, economists say, meaning that businesses being open may not be enough to revive commerce.

“Businesses are already open. You can get on a plane and travel to a hotel if you want to,” Stettner said. “But people are not going on planes or going to conferences because people don’t want to.”

He added, “People don’t feel safe. You need to bring infections down first before the economy can grow again and jobs return.”

Consumer spending data shows that spending by low-income households dropped significantly in August and September after the $600-a-week jobless boost from the CARES Act ended. Overall, however, consumer spending and confidence are on the rise.

Some economists say that the lack of additional unemployment aid has likely forced people back to work and led to the unemployment rate dropping. But the reduction in aid has also reduced spending, resulting in less demand for goods and services and less business growth.

“The unemployment aid falling away is probably lowering the unemployment rate somewhat,” said Ryan Bourne, an economist who focuses on labor issues at the CATO Institute, a libertarian think tank. “But it’s also reduced spending, which then reduces employment through the demand channel.”

Bourne said the coronavirus pandemic continues to be the main cause for high unemployment, but he added that on the margins, there has been a smaller group of people that the federal unemployment benefit has incentivized not to return to work.

Bourne said that the causes for unemployment were varied and different across the United States, depending on population density and the prevalence of the virus. He gave the example of Washington, D.C., where low-wage employment (those making less than $27,000 each year) was down 20% in early August. In Alaska, however, low-wage employment was up 10% during the same period.

“We’re just going back to the old state unemployment system,” said Stephen Moore, one of Trump’s top outside economic advisers.

“It’s not like people will starve or go homeless. The system has worked for 50 years, so why wouldn’t it work now?” said Moore, who is also a contributor at the Washington Examiner.

Moore also highlighted the millions of jobs that returned in the past few months and said the lack of additional jobless aid would only further encourage people to return to work.