Home Business Trump shoots his way out of the White House 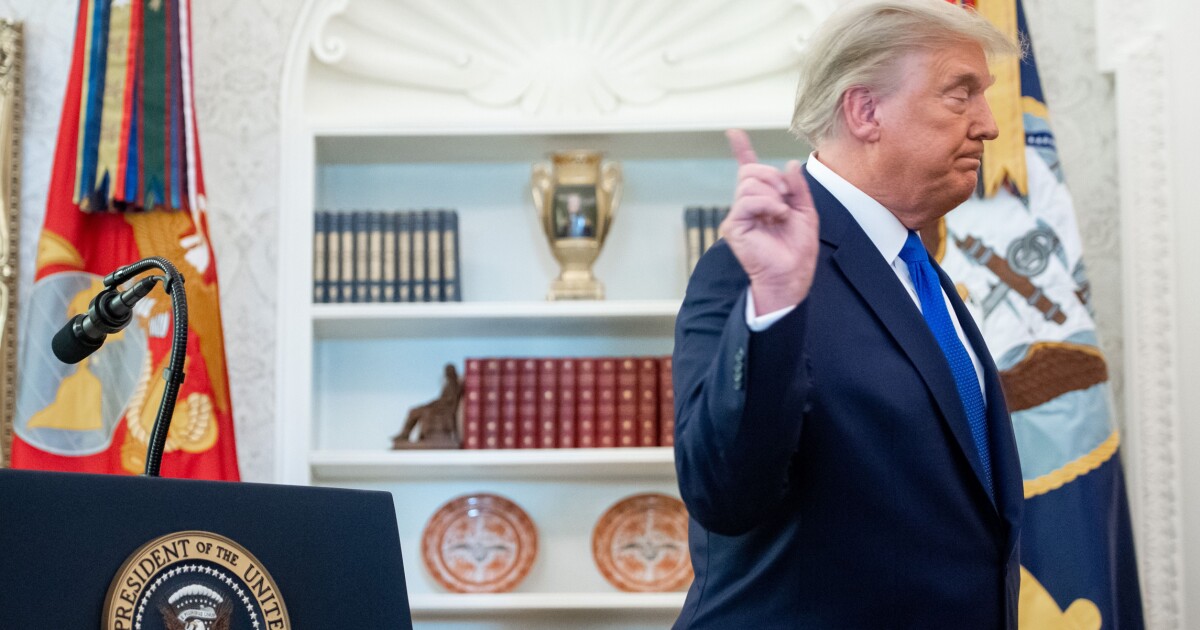 President Trump is exiting the White House the way he entered it: with detractors complaining of chaos and supporters exhorting him to burn it all down. With the latter request, Trump seems eager to comply.

Over Christmas, Trump pulled the rug out from under his own negotiators and congressional Republicans by withdrawing his support from a COVID-19 stimulus bill everyone had thought had been agreed to by leaders of both parties.

“The bill they are now planning to send back to my desk is much different than anticipated,” Trump said. The stimulus payment amount to individuals was “ridiculously low,” and the extraneous spending, much of it from the White House’s own budget request, was too high.

“Congress found plenty of money for foreign countries, lobbyists, and special interests while sending the bare minimum to the American people who need it, and it wasn’t their fault.” Trump continued. “It was China’s fault, not their fault.”

Republicans, including at least one of the two senators about to face voters in the Georgia runoff elections, pleaded with Trump not to disrupt unemployment checks on Christmas Eve and risk a government shutdown shortly thereafter. Relief had been weeks in coming, thanks in part to preelection Democratic intransigence, and was now tied to funding the federal government. And then, as quickly as the crisis came, it was averted when Trump signed the “disgrace” anyway while pledging to send Congress rescission requests to excise the pork-barrel spending.

“He’s an unpredictable guy,” a former Trump 2016 campaign official said. “That’s part of his appeal when it works. And it’s just the way he is when it doesn’t.”

Trump’s last-minute legislative interventions have frustrated allies on Capitol Hill before. He has been known to torpedo talks with tweets. He has outsourced the deal-making to other members of his administration — Treasury Secretary Steven Mnuchin was the point person on the COVID-19 stimulus package — and then rejected their handiwork once delving into the details for the first time or, critics say, hearing negative feedback from his base. Sometimes, he signs the bill anyway. Sometimes, he doesn’t.

The $740 billion defense authorization bill is an example of when he does not. Generally considered must-pass legislation, that is why Trump wanted it to include a repeal of Section 230 to address what he considers discrimination against his supporters and himself by major social media platforms. (Tech policy experts have questioned whether this would actually produce his desired results.) When lawmakers did not comply, he vetoed it and put Republicans in a position in which they had to consider overriding him.

Legislative strategy aside, some do see in Trump’s advocacy of $2,000 stimulus payments, criticism of pork-barrel spending, bashing of Big Tech, and willingness to stand up for military bases named after Confederate war dead and against those slowing down troop withdrawals from Afghanistan the beginnings of the re-imagined Republican Party his presidency made possible.

“He made his point that he is a pro-populist political leader who was only going to sign this behemoth of a bill as a last resort,” said John Feehery, a GOP strategist, of Trump’s COVID-19 stimulus bill climbdown. “There is a method to his madness.”

A key question for Republicans is whether that is also true of his election challenges, which have persisted past the Electoral College affirming Joe Biden as the president-elect. Many Trump supporters don’t believe he should be leaving the White House at all, and the president may expect his party to resist the certification of the electoral vote results.

When Al Gore reluctantly conceded the 2000 election, he could blame the conservative justices on the Supreme Court who handed down Bush v. Gore for what he believed was an unfair outcome. In 2016, Hillary Clinton could blame Russian election interference and hope an investigation would prove collusion with the Trump campaign, offering impeachment as a possible recourse.

Here, Trump may be setting up Vice President Mike Pence and Senate Republicans for the blame once Biden’s Electoral College majority is certified, along with GOP election officials in several states, including must-win Georgia.

“Republicans in the Senate so quickly forget,” Trump tweeted. “Right now they would be down 8 seats without my backing them in the last Election.”

But the president has nevertheless continued to campaign for Georgia’s two Republican senators in an effort to keep the chamber under his party’s control.