Sometimes, economic data are so good that we should all, the entire nation, pause for a few minutes and celebrate. This is the case with the Census Bureau’s Sept. 15 report on 2019 U.S. income growth for families and individuals, which tells us much about how we might seek to prosper once again.

Indeed, as shown in the below chart taken from the report, median income gains across the last five years are truly amazing. For every racial and age group, the gains are equally astounding. In fact, if one digs deeply into the report (and it’s worth a try), one finds that even income inequality fell a bit in 2019. 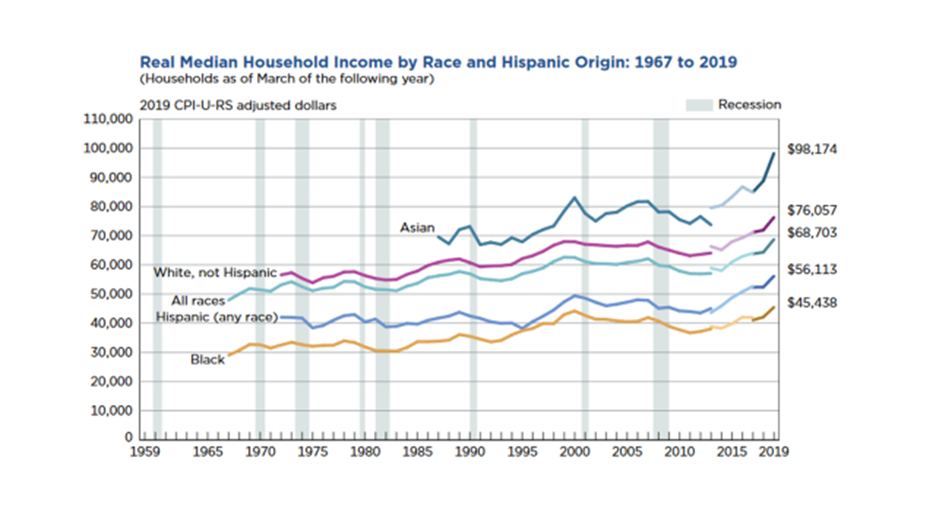 What happened? Why the pre-pandemic surge in prosperity? And why aren’t the TV commentators and keepers of the public conscience cheering the good news?

Yes, I know. That was 2019, and this is now, just nine months later. We all understand, I guess, that more compelling news stories leave little room to celebrate widespread prosperity that has since been compromised for many of us.

Bad news is often more urgent and indeed more interesting. On top of the tragic coronavirus pandemic, it’s also an election year, with endless bitter criticism of opposing candidates and proposed policy positions. There are horrible racial tensions in major cities, Western fires burning out of control, and hurricanes hitting the Gulf Coast.

Each of these things deserves our attention, but none can invalidate the good news. Why the remarkable jump in prosperity? Was it something government did? The Federal Reserve?

Well, maybe. But the more compelling explanation for 2019’s economic success has more to do with what government did not do. The fundamental explanation is just plain simple: People went back to work. Employment growth surged, the unemployment rate plummeted, and people created wealth the old-fashioned way — they earned it.

But didn’t the government take meaningful actions to get all this going? Not really.

The Trump administration decided to do less, not more. Instead of trotting out more command-and-control regulation to fortify the national nanny and direct economic activity, the Trump team cut back on existing rules and issued hardly any new major ones. Instead of penalizing profit-making activity by raising the capital gains tax, the Trump leadership cut the tax. And instead of taking larger bites in taxes from wages and salaries, the Trump administration reduced the take.

Yes, once again, we learn that incentives matter. As though following Adam Smith’s advice for sponsoring a simple system of liberty by having government provide defense, delivery of justice, and protection of property rights, many of the Trump administration’s domestic economic policies did the right kind of nothing.

Of course, this is not the full report card, just an important part of it. The Trump team also thumbed its collective nose at Adam Smith’s call for open borders, free trade, and the easy movement of people. Trump himself seemed to enjoy playing gatekeeping capitalism by inserting Oval Office influence into corporate decision-making.

But still, the 2019 economic record deserves meaningful recognition. We should always celebrate these exceedingly rare times of thoroughgoing prosperity. More importantly, perhaps, we should remember this success as we work to put 2020’s economic turmoil behind us.

Bruce Yandle is a contributor to the Washington Examiner’s Beltway Confidential blog. He is a distinguished adjunct fellow with the Mercatus Center at George Mason University and dean emeritus of the Clemson University College of Business and Behavioral Science. He developed the “Bootleggers and Baptists” political model.