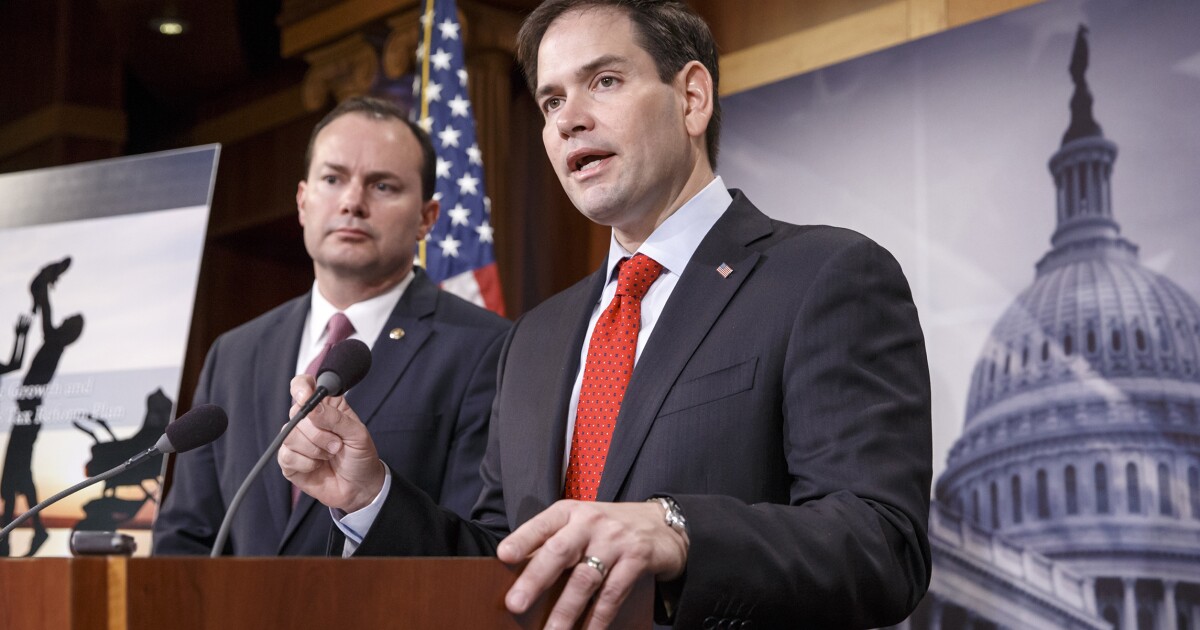 Two GOP senators are calling for a bipartisan change to the child tax credit that would increase the benefit but maintain an earnings requirement, an alternative to Democratic proposals for a major benefit that is not conditioned on work.

Sens. Marco Rubio of Florida and Mike Lee of Utah released a statement on Wednesday admonishing Democrats for eliminating the income threshold to receive child tax credit benefits. They lauded the 2017 tax cuts for doubling the tax credit and said Republicans had wanted to increase it even further but were shot down in favor of the Democratic expansion.

“In 2017, the Republican Party delivered historic relief to working- and middle-class American families in the form of doubling the child tax credit,” the duo said. “The impact was enormous. Working American households making between $20,000 and $50,000 received the largest increase in tax cuts from the expansion, and families with less than $20,000 in income saw their child benefits skyrocket by nearly 250%.”

As part of this year’s American Rescue Plan, Democrats expanded the child tax credit by increasing the money that families received from up to $2,000 per child to $3,600 for children under 6 years old and $3,000 for older children. The biggest change, though, was that even a parent who was not working and had zero income could get the entire sum of the Democratic expansion, a move Republicans say is akin to welfare without work.

The Rubio-Lee plan proposed earlier this year would have boosted the child tax credit to $3,500 per child and $4,500 per child under the age of six. The Democratic alternative that was chosen also includes direct monthly payments for families, while the Republican plan would have had the credit paid out when taxes are filed.

“Democrats chose the alternative: simply handing out cash to parents, including ones already on welfare or in households where nobody is working,” the senators said on Wednesday. “This kind of universal basic income makes more Americans dependent on government and severs the vital elements (work, marriage, community, and beyond) required to raise healthy families.”

The two also ripped President Joe Biden’s plan to extend the expanded child tax credit, without earnings requirements, until 2025 as part of his American Families Plan, a $1.8 trillion spending package that he will announce on Wednesday.

Despite GOP opposition to extending the expanded credit, which is set to expire this year, some Democrats on Capitol Hill have said that the extension isn’t enough. A group of liberal lawmakers has been pressuring the White House to extend the benefit in perpetuity.

Sens. Sherrod Brown of Ohio, Cory Booker of New Jersey, and Michael Bennet of Colorado joined with Reps. Rosa DeLauro of Connecticut, Suzan Delbene of Washington, and Ritchie Torres of New York in a statement earlier this month that permanently extending the revamped child tax credit was their “priority.”

“Expansion of the Child Tax Credit is the most significant policy to come out of Washington in generations, and Congress has an historic opportunity to provide a lifeline to the middle class and to cut child poverty in half on a permanent basis,” the lawmakers said. “No recovery will be complete unless our tax code provides a sustained pathway to economic prosperity for working families and children.”

Other Republicans have also proposed sweeping changes to family tax credits. On Monday, Sen. Josh Hawley of Missouri said he wanted to create a “Parent Tax Credit.” The proposal would provide a fully refundable tax credit of $6,000 for single parents and $12,000 for married parents with children under the age of 13.

Biden will announce his American Families Plan during his first address to a joint session of Congress on Wednesday at 9 p.m. He intends to pay for the hefty spending package by hiking the top individual income tax rate to the pre-2017 level of 39.6% and taxing capital gains for households making more than $1 million as ordinary income. The proposal has been met with fierce resistance from Republicans.