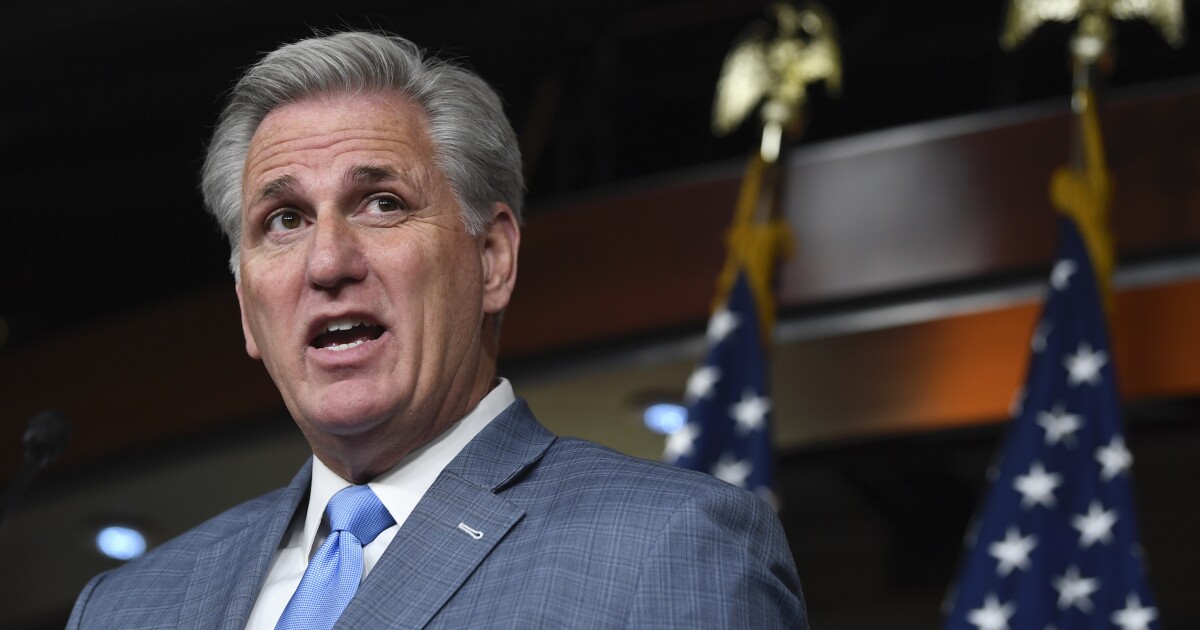 In their last push to try to retake the majority, House Republicans on Tuesday laid out the agenda they’d pursue were they to win. It follows a tradition for the minority party that dates back to the “Contract With America,” which played a key role in the GOP’s takeover of Congress in 1994.

“Americans are fed up with politicians who say one thing and do another,” House Minority Leader Kevin McCarthy declared in front of the Capitol steps. “Instead of empty rhetoric, they deserve results. This is why we are announcing a ‘Commitment to America.’”

But this “Commitment” departs from the “Contract” (and the 2010 “Pledge to America”) in many important ways. It has less substance, does not call for any fundamental changes to Washington, and most importantly, abandons any semblance of fiscal responsibility.

In 1994, Republicans promised an “end of government that is too big, too intrusive, and too easy with the public’s money.” The first proposal mentioned in the “Contract” was a “Fiscal Responsibility Act.”

In 2010, as the Tea Party movement galvanized the party, the Republican “Pledge” lamented that “the deck is stacked against limited government and fiscal responsibility. This must stop. We have a plan to impose fiscal discipline and cut government down to size.” What followed was a 10-part plan to put the federal budget on course to achieve balance.

Once in the majority, Republicans came up short of what they promised, but what is striking about the “Commitment” is that Republicans don’t even pay lip service to fiscal discipline.

The only passing nod to it comes in the last bullet point, when Republicans express support for “reaching bipartisan consensus to protect and strengthen Social Security and Medicare and reduce our debt.”

Yet, as we already know, Democrats talk of expanding Medicare and Social Security, not making them fiscally sustainable, and are pushing trillions of dollars of new spending. No “bipartisan consensus” is available, and suggesting otherwise is a way of evading the issue. The only interpretation is that Republicans will not address long-term entitlement challenges and don’t see it as even an aspiration. This isn’t because debt problems have eased since 1994 or 2010. They’re much worse — historically bad.

The Congressional Budget Office revealed in September that it expects Washington to spend $6.6 trillion in 2020, more than double what it collects in taxes, bringing the deficit to $3.3 trillion. In 2021, accumulated public debt would then exceed the size of the economy. By 2023, even assuming continued peace, it’s expected to hit 107% of gross domestic product, which would blow past the previous record set during the crisis of World War II.

Deficits have exploded due to the coronavirus, but our rising red ink isn’t tied to a one-off event, and it won’t recede once the current crisis is over. Instead, with the retirement age population growing and pushing up healthcare costs, the federal debt is going to get worse in the coming decades.

Long gone are the promises to repeal Obamacare and replace it with a healthcare market that would give people more control over their healthcare dollars. Now, the GOP healthcare plan focuses on “protecting individuals with pre-existing conditions and expanding access to affordable telemedicine, mental health services, and opioid treatment.”

Their proposals would actually make things worse. They want to make Trump tax cuts permanent without offsetting the deficit effects with spending cuts elsewhere. They promise to pump $200 billion more into the Paycheck Protection Program. At times, their economic proposals are hard to differentiate from pure Keynesian stimulus. One line item is a promise to “upgrade and modernize America’s infrastructure.” The infrastructure proposal — we kid you not — includes “a five-year plan” to repair roads, bridges, and airports.

It’s one thing to argue that deficit reduction should not be an immediate priority in a time of crisis, but simply to give up on fiscal responsibility betrays the younger generation and sets the stage for a future crisis.