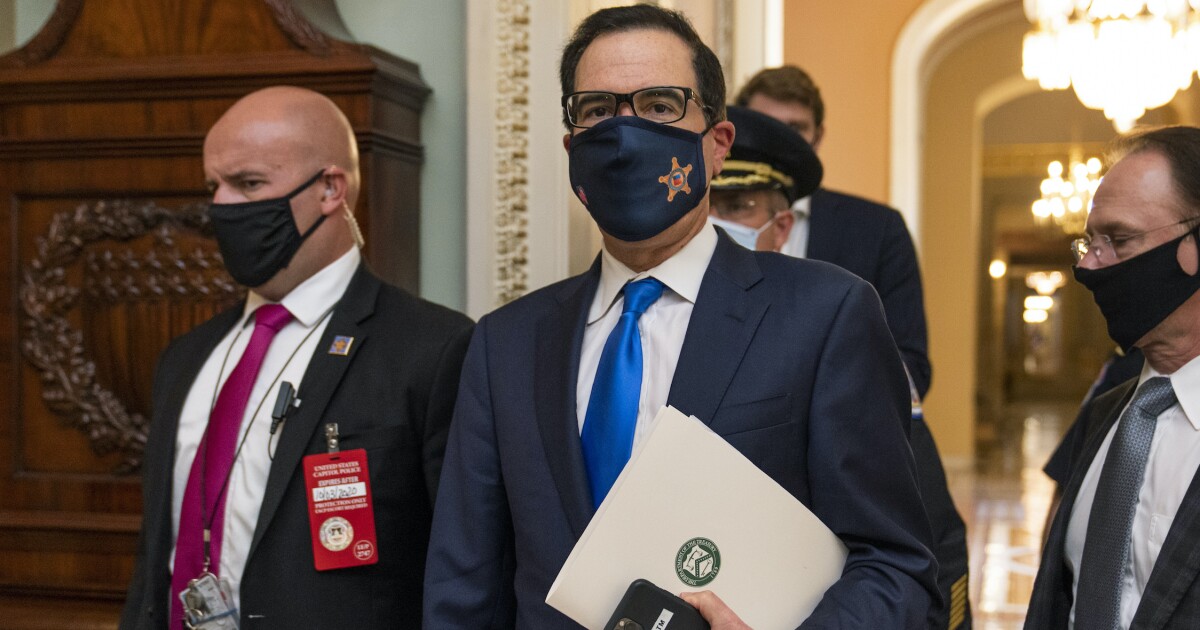 Treasury Secretary Steven Mnuchin and Speaker Nancy Pelosi concluded several hours of talks Wednesday afternoon without a new deal on a coronavirus aid package, but the two sides said they will continue to negotiate.

“We’re going to go back and do a little more work again,” Mnuchin told reporters Wednesday as he left the Capitol. “I think we’ve made a lot of progress in a lot of areas.”

The package would include new aid for small businesses and another round of stimulus checks, as well as money for schools and healthcare, among other provisions. It has been stalled for weeks because the two parties cannot agree on the cost or scope of the bill.

House Democrats plan to leave town this week to campaign ahead of the Nov. 3 election but would return to vote on a deal if one is reached, Majority Leader Steny Hoyer, a Maryland Democrat, said Wednesday.

Without an imminent deal, Democrats plan to vote tonight on a pared-down aid package they released earlier this week that is meant as a compromise offer to Republicans. The measure costs $2.2 trillion, which is a reduction from a $3 trillion aid package House Democrats passed in May.

Mnuchin indicated that he has offered the Democrats $1.5 trillion and isn’t likely to go as high as the $2.2 trillion or even $2 trillion.

“We still don’t have an agreement,” Mnuchin said.

Pelosi, in a statement, said the two, who first began negotiating last summer on the latest round of aid, will continue talking.

“Today, Secretary Mnuchin and I had an extensive conversation, and we found areas where we are seeking further clarification, Pelosi said. “Our conversation will continue.”

Most Senate Republicans support a measure providing $500 billion in aid, and a smaller faction would back a bill spending roughly $1 trillion.

“The thought that Senate Republicans would go up to $2.2 trillion is outlandish,” Senate Majority Leader Mitch McConnell, a Kentucky Republican, said Wednesday.